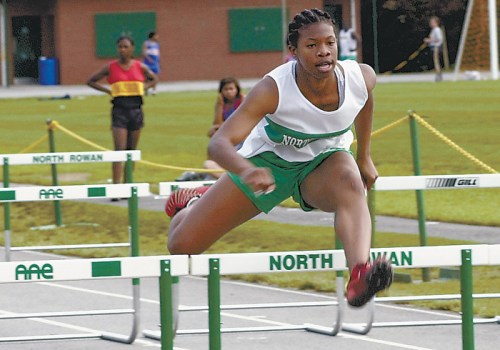 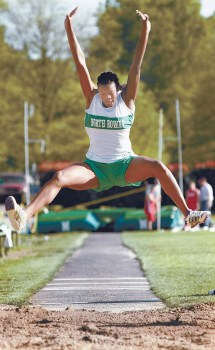 Latasha Pharr is in the Class of 2023 of the North Carolina High School Track and Field and Cross Country Hall of Fame. 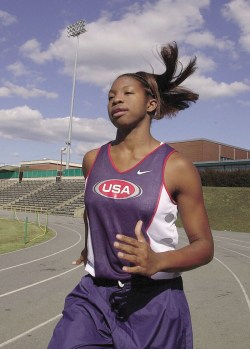 CHARLOTTE — The holidays got happier for Latasha Pharr when she received a message on Facebook from Brett Honeycutt.

Honeycutt is the founder of the North Carolina High School Track and Field and Cross Country Hall of Fame, and he’s mighty glad he was able to catch up with Pharr.

Standard Halls of Fame tend to lean heavily toward the traditional big three sports — football, basketball and baseball — so a few years ago, Honeycutt saw a need for track and field/cross country to have a Hall of Fame to call its own.

Honeycutt chaired the committee of coaches and writers that elected the inaugural 10-person class of inductees in 2019.

The Hall of Fame’s permanent home is the JDL Fast Track in Winston-Salem. About 10 athletes, coaches and contributors are elected each year. No class was elected for 2021 due to COVID, but there were inductions in 2020 and 2022.

That makes the Class of 2023 the fourth group of inductees for a growing Hall of Fame. Pharr is part of that class. Induction ceremonies will be held on Jan. 28.

“This Track Hall of Fame honor was totally out of the blue,” Pharr said.  “But it was a great start of my day to say the least. I normally do not check social media first thing in the morning, but it was in my spirit to. I was curious of the message as it was not a familiar name, so I immediately thought it must be a former classmate. As I read the message, I could feel my eyes widen and I was smiling from ear to ear. I’m truly overwhelmed with gratitude for this honor. Track and field has shaped so many fulfilling experiences and I’ve met some amazing people.”

The years zoom by, and Pharr will turn 40 in May. She’s worked in the banking industry for 14 years. She’s a businesswoman and motivational speaker. Not surprisingly, her passions are fitness, health and wellness. For the last two years, she’s successfully marketed a line of juices under the brand name of “Pharr Too Juicy.”

“We have amazing health conscious juices that aid in healing the body from within,” Pharr said.

Pharr would be a unanimous choice by coaches as Rowan County’s foremost female track and field athlete. She dominated the 100 hurdles, 300 hurdles, triple jump and long jump locally and regionally, and that dominance extended to the state level.

“Latasha was about sacrifice, dedication and work,” Steele said when Pharr was inducted into the Salisbury-Rowan Hall of Fame in 2011. “She put in the time to excel, and she made every step of the journey a positive experience.”

Pharr’s fondest high school memory was her first day of high school practice at North Rowan.
“At that time, the men’s and women’s programs were separate and I was given instructions from the women’s track coach to control my own practice,” Pharr said. “I was literally a deer in the headlights. I walked over to Coach Steele (men’s coach only at the time) and was extremely nervous with a slight tear in my eye. He looked me in my eyes and told me, ‘Pharr you know what to do, trust yourself.’  That was a pivotal point in my confidence and believing in my talent. Being a great student-athlete requires more mental strength and ability than physical.”

She won 12 outdoor state titles in her high school days at North Rowan. She went 4-for-4  at the state level as far as winning the triple jump and the 100 hurdles, her favorite event.

She won three state titles in the 300 hurdles and won the long jump once.

She led four straight championship teams and was voted MVP of the 2A State Championships every year of her high school career (1998-2001).

In the final meet of her high school career, the 2001 2A Outdoor State Championships, Pharr was fighting leg injuries, but she still won three events.

She scored an amazing 142 points for the Cavaliers in four years of outdoor state meets.

Pharr added five individual indoor state championships and was meet MVP in 2000. When she graduated from North in 2001, she held state records in the 55 and 60 meter hurdles.

Track was always her first love, but Pharr also competed well in volleyball and basketball for North. She was twice named Rowan County Female Athlete of the Year.

Pharr was a six-time All-America in high school and competed internationally in Chile and Norway for the USA.

“The love and the passion for track and  field I received from my family and coaches provided the drive,” Pharr said at her Salisbury-Rowan Hall of Fame induction. “But I never knew how far it would take me.”

She went on to star collegiately at Alabama, where she made a comeback from knee surgery and made an impact in the jumps and hurdles.

As a junior, she had a triple jump of 44 feet, 2 inches in the Southeastern Conference Championships.

Her strongest college memory is graduation more than any meet.

“Graduation. definitely,” Pharr said. “My heart was filled with so much joy as my family and friends watched me receive my degree. Being a student -athlete takes a lot of hard work, discipline, determination and time management. I’m sure most would think my obvious response would be a track-related event or accomplishment, but I’m most proud of the personal development track and field instilled within me.”

Now she has been tabbed for membership in her second Hall of Fame. She is obviously more than qualified. As Honeycutt said in an email to the Post, “Very few can match her resume.”

More Rowan County athletes will likely be enshrined at the JDL Fast Track in the years ahead. For quite a years, North was Triple Jump Central for the entire state. That was Steele’s specialty.

There’s a lot of catching up to for the North Carolina High School Track and Field and Cross Country Hall of Fame, but Honeycutt is looking forward to it.

“North Carolina has had state championships in track and field since 1913, and has had indoor track meets since 1922, when the first meet was held at the old Star Brick Warehouse in Durham, and we’ve had cross country meets since 1929 when Winston-Salem High (R.J. Reynolds) dominated the sport, so we’re far behind on recognizing those who have accomplished so much and given so much to the sport,” Honeycutt said. “That’s our goal, to honor those who have helped make this sport so great in North Carolina,”