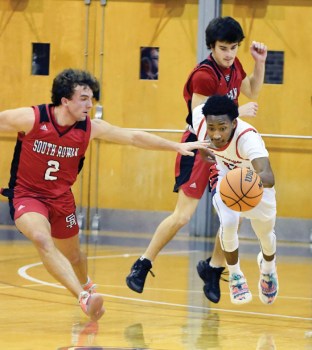 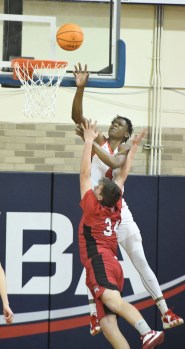 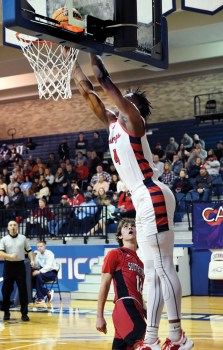 East's Tee Harris had 27 points. photo by Wayne Hinshaw, for the Salisbury Post

SALISBURY — East Rowan boys coach Andrew Porter is confident that no one in the Dale’s Sporting Goods Sam Moir Christmas Classic can cope with the Mustangs’ 6-foot-6 star Tee Harris.

Fifth-seeded South Rowan stayed with the Mustangs for a half on Wednesday afternoon, but Harris, who came in averaging almost 26 points per game, totaled 27 points and 10 rebounds as East pulled away for a 74-50 victory.

The fourth-seeded Mustangs got 15 points from sharpshooter Dylan Valley and eight each from Jonathan Wembolua and Caleb Haynes.

East and South played on even terms in the second quarter and the favored Mustangs settled for a 32-25 halftime lead.

“We didn’t play well at all in the first half,” Porter said. “Sluggish start for us and South was definitely ready to play. They made it tough for us, got us out of our rhythm.”

East (3-5) has played a rugged early schedule and now owns back-to-back wins for the first time this season.

East took control in the third quarter, knocking the Raiders out with a 28-point outburst.

“In the second half we showed up on offense and defense, lots of effort and better energy,” Porter said. “We fought through some adversity, and in the second half, we brought it.”

South (1-8) hasn’t won since opening night, but this was one of the Raiders’ better efforts, the first time they’ve managed 50 points in a while.

South got career games from Elijah Anderson and Aaron Jones. They scored 16 each. Jones made four 3-pointers.

“We just didn’t shoot it as well in the second half, but the effort was still there,” South coach Daniel Blevins said. “It’s improvement. It gives us something to work on.”

East will play top-seeded Carson in the semifinals tonight at 7:30 p.m. Carson has a good-shooting team, but is 4-4, so the Cougars are not a typical No. 1 seed for the tournament. Potentially, it’s a great game between big rivals.

South will play in the consolation bracket today at 4:30 p.m. against North Rowan.

“First time this season we’ve had four,” first-year coach Dadrian Cuthbertson said. “We’re getting better. Best game so far for (freshman) Brant Graham. His confidence is picking up, and as he plays better, he gets more freedom. He’s going to be a very good player. And Kayvone Norman had his best floor game. He probably had 10 assists.”

Will Givens scored 18, as the Falcons won their fourth straight after an 0-5 start. He only got a couple of 3s, but he made some nice pull-ups.

“Teams are trying to run Will off the 3-point line, and he’s adjusting,” Cuthbertson said.

Athan Gill scored 16 points for the third-seeded Falcons, who beat North for the second time this season. Gill’s night included some powerful dunks.

“He did what Athan does,” Cuthbertson said. “A dozen rebounds to go with the points.”

Gill and Givens are usually good for 40 between them. Second-seeded North (4-6) held them a little below their averages, but West’s best balance of the season paid off.

Graham and Norman got 10 points apiece, while Adrian Stockton and Elijah Holmes contributed six each.

West jumped out erly and led 17-4 after a quarter.

Jayden Polk led the Cavaliers with 17, but West did a good job defensively against George Maxwell, who has had some huge games, and also contained Amari McArthur, who is capable of a big night.

“The guys played the scouting report well — we knew we couldn’t let Maxwell get going,” Cuthbertson said. “That was a focus.”

While he coaches West, Cuthbertson has years of AAU experience and he’s coached all the Cavaliers at some point in their careers.

“They’ve got a good team,” he said. “They hit the glass and they’re not bad defensively.”

North got 12 points from Naejone Whitney, who made his season debut. Dyzarious Carpenter, returning from an injury, also played for the first time this season.

“The first quarter killed us,” North coach Jason Causby said. “We’re still trying to put it all together.”

North moves into a 4:30 consolation game against South Rowan today.

West is in Friday’s 8 p.m. championship game. The opponent will be the winner of tonight’s Carson-East Rowan contest.