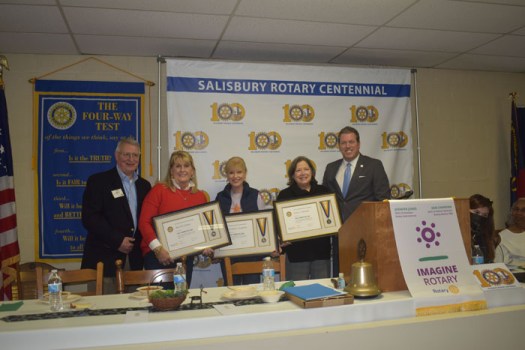 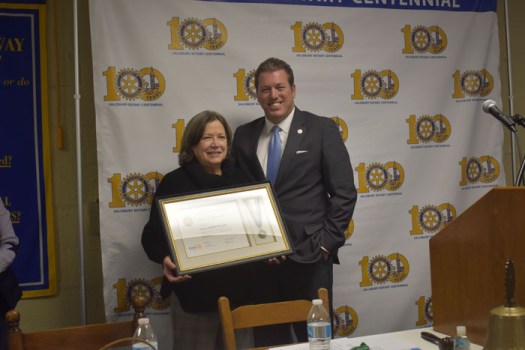 Frances Edwards and Steve Fisher pose with the Paul Harris Fellow award. Edwards received the award for her work with the Charity League of Salisbury. Charlie Drape/Salisbury Post. 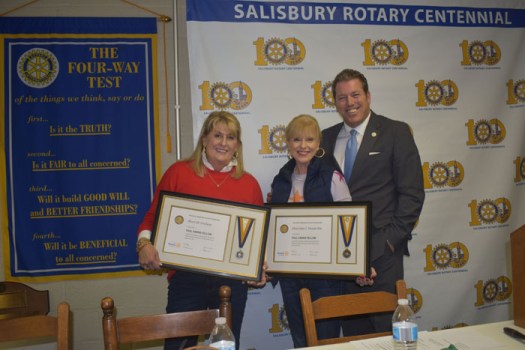 SALISBURY —  The Paul Harris Fellow recognition is an award given by Rotary Clubs around the world to individuals who have made contributions in their name of over $1,000, and on Tuesday, the Rotary Club of Salisbury handed out awards to three community members.

“With the Rotary Foundation, people can, either for themselves or somebody else, give money and that’s how you become a Paul Harris fellow,” explained Pete Teague, the Rotary Club of Salisbury’s 2022 president. Paul Harris founded Rotary International in Chicago in 1905.

Hen Henderlite, Shari Graham and Frances Edwards received the awards Tuesday at the last Rotary meeting of the year.

Henderlite and Graham are well known for their party planning and organizing efforts throughout Salisbury. Referred to as the “party peeps,” the duo has hosted events for non-profits, weddings and fundraisers for years. Last year, they received distinguished citizens awards from the North Carolina Civitans for their efforts in improving the efficiency of vaccine clinics hosted by the Rowan County Health Department, according to previous Post reporting.

“What they do is truly amazing,” said Steve Fisher, the chairman of F&M bank who handed out the awards. Fisher said Henderlite and Graham for their restless energy and their tireless efforts to make each event they plan something special.

“They create that environment that you get to enjoy that evening,” Fisher said. “I have no idea where all this energy comes from, but I’m so glad they share it with our community.”

Edwards was the next to receive her award for her work with the Charity League of Salisbury. Fisher referred to her as the “house mother” of the league, as well as for the Rotary Club.

“Every week she will meet you at the door, she will warmly greet you and incredibly, graciously serve you, and then she will easily put you in your place,” Fisher said to laughs. “So Frances, on behalf of our club, thank you so much for all you continue to do for the Charity League. You are a very well-deserved Paul Harris fellow.”