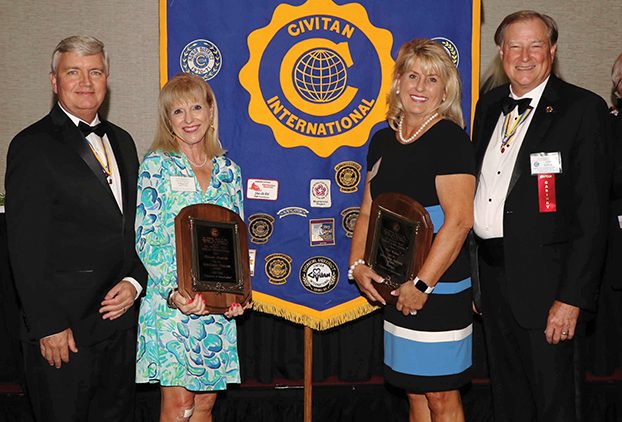 Mark Curran (Governor of NC District West for 2021-22), Hen Henderlite, Shari Graham and John Sofley (Civitan International Director for Region 3) pose at the awards banquet at which Henderlite and Graham were presented with Distinguished Citizen of the Year awards. Photo submitted.

SALISBURY — Shari Graham and Hen Henderlite do almost everything together — that includes winning awards.

The duo, well-known in Rowan County for their planning prowess, was recently honored with Civitan Distinguished Citizen awards at the North Carolina District West Convention in Hickory last weekend. They were chosen among nominees from across the district, which includes dozens of Civitan clubs stretching from Greensboro to Asheville.

The award is one of the top honors given out and is typically given to a single person. Graham and Henderlite were a fitting exception.

The duo received the honor largely for their efforts in improving the efficiency of the vaccine clinics hosted by the Rowan County Health Department at West End Plaza. Dari Caldwell, chair of the Board of Health, called on Graham and Henderlite to help with the clinics because she was familiar with their experience planning events around town.

After analyzing a few of the clinics and scoping out what other counties were doing, the duo came up with several measures to make the drive-thru process more streamlined.

“Shari and Hen were our selection for Civitan citizen of the year for the extensive work they did for making that clinic successful,” said Diane Goodnight, a member of the Salisbury club’s awards committee. “It was their idea on how to do it and make it successful. We were so proud of them and wanted to honor them.”

Members of the Salisbury Civitans were well aware of Graham and Henderlite’s efforts organizing the vaccine clinics because many of them donated time to help with the events.

“We had a number who volunteered at the site,” Goodnight said. “We logged a lot of hours from our different members who participated over time. That’s what we do. We’re volunteers.”

Graham and Henderlite both said they appreciate the award, but they are quick to deflect credit to the nurses, volunteers and other staff members who helped put shots in arms during the vaccine clinics.

“It was a team effort,” Henderlite said. “While we got the citizens of the year, if they had not done their role, the clinic would not have gotten better. The time spent getting shots wouldn’t have gone down. The logistics still would’ve been a quagmire. While we got the accolades, it’s really a reflection on their team and how they took the direction and acted upon it.”

Graham said they never organize an event for the “atta boys,” but instead do it for the satisfaction of a job well done.

As the Salisbury Civitans award committee compiled an application for the award, they kept the process secret and relied on Graham and Henderlite’s husbands for additional details.

“They reached out to Bill (Graham) and John (Henderlite) and those guys apparently keep secrets pretty well because we both got emails within seconds of each other,” Graham said. “The email said, ‘You’ve been nominated and by the way you won.’”

The email notification came just 10 days before the banquet in Hickory.

“It was a really quick turnaround,” Henderlite said.

The Salisbury Civitans nominate someone for the award almost every year, but this is the first time that several of the club’s longtime members can remember a person, or people, from Rowan County winning the award.

The duo isn’t resting on their laurels. They’ve already started planning this year’s ‘Tis the Season Spectacular parade. Last year, Graham and Henderlite put together a “reverse parade” that had viewers drive down main street in their cars while watching stationary performers and exhibits. The current plan for this year is to revert back to a more traditional parade, with floats traveling through downtown while spectators watch from the sidewalks.

That could change depending on the severity of the pandemic, but the duo isn’t too worried about having to adapt the event once again. Adjusting to fluctuating circumstances is old hat for them at this point.

Along with making arrangements for the parade, Graham and Henderlite are working on a number of other projects. They’re planning weddings and fundraising for other causes around town, such as the campaign for the new Partners in Learning facility.

As always, they’re tackling each project together.

“I can’t think of an event that we haven’t done together in over 15 years,” Graham said. “I think what we always tell people is we work really well together because we know what we’re both good at. There’s somethings that Hen does amazing that I don’t like to do and vice versa. I’m the visual, artsy person and Hen is about attention to detail and those types of things. We’re yin and yang.”