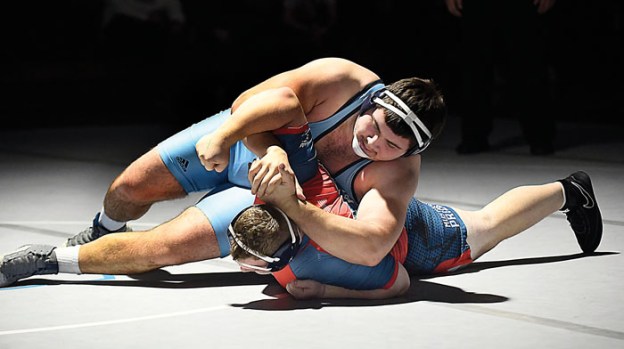 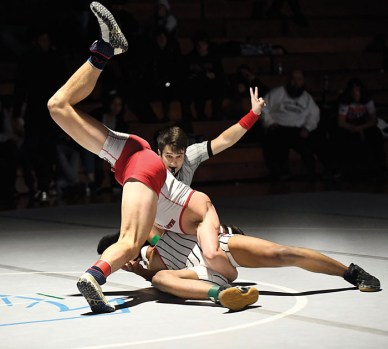 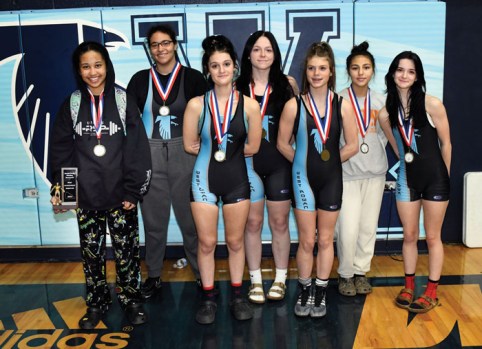 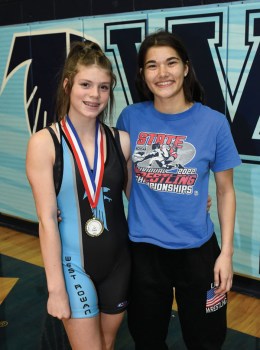 Kaidance Grandy from West, left, joins Leah Edwards from East, who wrestled in the boys competition and was the runner up in the 113 lb class. photo by Wayne Hinshaw for the Salisbury Post 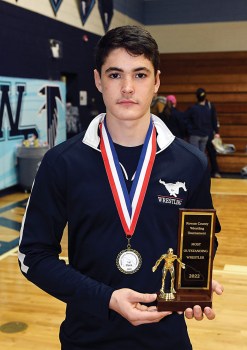 Rowan County's Most Outstanding Wrestler is Shayden Edwards from East Rowan., photo by Wayne Hinshaw, for the Salisbur Post

MOUNT ULLA — No matter how the bells jingled on Saturday, they kept playing West Rowan’s song.

Even without three of their first-string regulars, the host Falcons extended an impressive winning streak by snaring their fifth straight Rowan County wrestling championship and seventh in school history.

“Winning the county tournament is something everyone in the county takes pride in,” coach John Brown said after West claimed 10 weight class champions, totaled 231.5 team points and easily outscored runner-up East Rowan (128). “We all want to win this tournament. It’s still a big deal.”

“We’re real excited about the girl’s side,” Brown said. “Even though there weren’t a whole lot of them in the weight classes (10 entrants), this can only help. Girls will start talking to their friends and showing off their medals and stuff. It’ll help the sport grown. Next year, when it becomes a sanctioned sport, I expect it to be even bigger. But this was a necessary first step.”

The Falcons went big right from the start. They carried a 53-point edge over Carson into the final round, then won 10 of 11 matches — including six by pins and another by technical fall.

“It’s the usual for the team and myself,” said unbeaten West heavyweight Cristian Hercules-Pleitez (18-0), a two-time champ who pinned East’s Kaiden Baker in 45 seconds in the final bout. “It’s because of our work ethic — how hard we work and the way we work. It’s different from the rest of the county.”

Whatever it was, it worked. “I’m really happy for all of them, but especially for Cristian,” Brown said. “Him and Kevin O’Brien and probably the hardest workers in our room, day after day. Those two guys take it to another level. They work their butts off.”

O’Brien, whose sister Katie won a championship in the girl’s tournament, improved to 18-0 this season after prevailing 19-4 against Carson’s Parker Mills in the 132 final.

“I tried not to think about winning or losing,” O’Brien said. “That can get in your head. Instead, I concentrated on scoring points and helping my team win.”

Teammate Hunter Miller did his part. The junior needed some injury time to treat a leftover shoulder injury suffered during football season, then turned his 195 final-round match against Carson’s Trey Hill into a 10-2 rout.

“I’m wrestling with a pulled muscle in my left shoulder,” was how the Miller told his tale. “It only took a few seconds for the pain to go away.  I didn’t get mad about it. I just had to focus and get back on track.”

“I had a half (Nelson) and I switched to a body clamp,” Jenkins said with a post-tourney smile. “That put (Kirkpatrick’s) shoulders on the mat immediately. When I lifted his head, it was over.”

“I’ve been wrestling since second grade,” he added. “I started out at China Grove Middle School. It’s a pleasure to be able to take a spot here and help the team score points and win matches.”

Most agreed the Falcons — 12-0 in dual meets and ranked second in the 3A state poll — owe a thank-you note to Brown and his assistants (Jon Bolmer, Danny Misenheimer, Tim Pangburn and Brandon McCarty). “It’s awesome to win it again, especially at home,” O’Brien noted. “Because this team just works and works and works all year. We owe it to the coaches. They set this all up. Those guys would do the world for us.”

Edwards, who missed most of last season with an injury, felt like he was making up for lost time. “I’m real proud of myself,” he said, cradling the boy’s MOW trophy after a 15-0 final-round win over Salisbury’s Amir Bethea. “It’s been an exciting year so far — no injuries, all healed up, able to wrestle to my full potential.”

He improved to 16-1 this season and 66-11 lifetime after defeating Bethea by tech fall. Edwards built a 10-0 first-period lead and used a takedown plus three back points to end the match in the second.

“Everything just opened up for me,” said Edwards. “I sat on my shots and finished the way my coach taught me. It’s just go in, don’t stop moving and don’t allow your opponent to improve his position.”

Edwards’ younger sister Leah reached the final round for the second straight year, only to drop a 4-2 decision to South’s Mateo Diaz (113). She was the lone female to qualify for the boy’s finals.

“My sister’s definitely the popular one in the family,” her brother said. “She wrestled a good match. Last year she lost to the same guy, 6-0. This year it’s 4-2. She deserves it because she works hard isn’t afraid to wrestle against boys. Some girls aren’t as mentally strong as my sister. She’s always wrestled me, so for her it was just another match.”

East had a pair of champions in Christopher McDonald (106) and Shayden Edwards. South also crowned two — Diaz (113) and senior Sam Kincaid (152), who flattened Carson’s Tristian Clawson in 1:59. “It was tough,” Kincaid said. “You can’t ever go in looking for an easy way out. (Clawson) kept backing away from me. Later on I felt his head hanging over my shoulder. That’s how I caught him.”

Carson had five finalists but no champions. Salisbury had four second-place finishers. North, which wasn’t expected to field a team, had four placewinners.

Canada, meanwhile, beats to her own drum. The 120-pound sophomore won three matches and went home as girl’s MOW.

“Lately I’ve been losing matches, but today I did better,” she said afterward. “I’m excited for girl’s wrestling and hope more come out next year. Last year there was no regional or state meet for the girls, so maybe this is the start of something better. I like wrestling against boys, but it’s much fairer to go up against other females.”

“I like that girls are starting to come out,” Grady said. “A lot of them might be scared or unsure about wrestling, but maybe want to find out. I think there are a lot of girls who want to try this.”

Added O’Brien: “For West Rowan, it’s going to lead our program to more success — and that all goes back to Coach Brown. He drilled us real hard and wouldn’t let us slack off.”