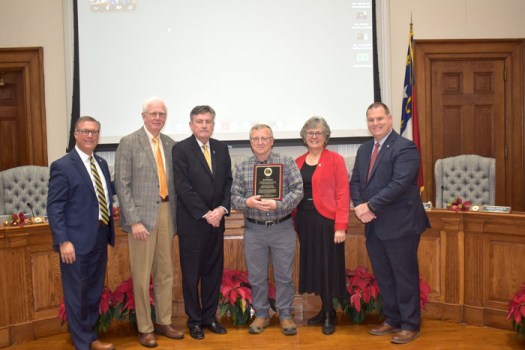 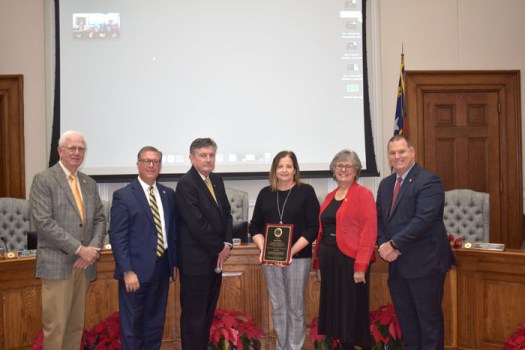 Tax collector Tonya Parnell stands with the Rowan County Board of Commissioners after receiving a plaque recognizing her for over 30 years of service in the Rowan County government. Parnell is retiring at the end of December. Charlie Drape/Salisbury Post

SALISBURY — Tonya Parnell and Bob Pendergrass have a combined total of over 70 years working for Rowan County.

That experience is going to be missed, as was shown during Monday’s Rowan County Board of Commissioners meeting, when the commissioners gave a special recognition to the two longtime employees who are both retiring this month.

In 2005, she became assistant tax collector, then was promoted to tax collection’s manager in 2008. She made it to the top in 2019 when she officially became the Rowan County tax collector.

Parnell said that her favorite part after all those years was working with the citizens and being able to help them with their issues.

“Working with the public is the best part about it,” Parnell said. “And of course having a great staff and the different folks I’ve worked with over the years, that’s what I’m going to miss the most.”

Her last day is Dec. 31 and she is planning to travel, go camping and spend time with her family, especially her two granddaughters and her grandson.

Parnell was accompanied with her husband, Fire Chief Bob Parnell, and was presented a plaque that recognized her for her years of service.

Pendergrass started as a part-time county employee in 1977 when he was 17 and worked in various positions, including as manager of the campground at Dan Nicholas Park and at the park’s Nature Center off-and-on until 1984 while he was pursuing his degree.

He came back to the Nature Center in 1989 as a part-time park attendant until he became a full-time employee as a naturalist in 1995. He was responsible for taking care of the wild animals like corn snakes, bald eagles and black bears. Pendergrass looked over those animals and set up educational programs for those visiting the zoo.

It only took Pendergrass one year to show his skills and dedication and in 1996 he became the Nature Center’s supervisor. He stayed in that position for 20 years, until taking the job of director of animal services in 2016.

As director, his duties included being in charge of the Nature Center, the Rowan County Animal Shelter and the Animal Enforcement divisions. Pendergrass and his team take care of all domestic animals in Rowan County and keep stray animals that are found at the shelter until they are able to locate a home.

“It’s something new everyday and it’s a lot of responsibility,” Pendergrass said. “A lot of citizens are involved with the shelter and there are people that work with rescues to help find them a home. It’s kind of a village situation.”

Pendergrass also was presented a plaque from the commissioners thanking him for his service.

“You made a tremendous difference in all of our animal services,” Commissioner Craig Peirce said. “I can’t say enough about you Bob, you know how I feel about the job you and all your staff do out there.”

After receiving the plaque, Pendergrass thanked his staff and said it has been an honor for him to work in Rowan County.

“The only time I’ve ever said I had the best job in the world is when I worked for Rowan County and that is because of the people I got to work with. It’s been a great pleasure and an honor to be a public servant for the Rowan County government,” Pendergrass said. “Thank you very much.”