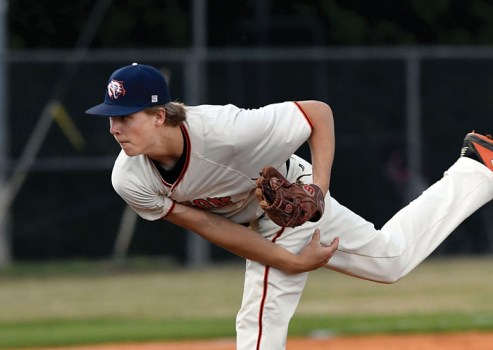 Carson's Hayden Simmerson will be pitching for Catawba next. File photo by Wayne Hinshaw, for the Salisbury Post 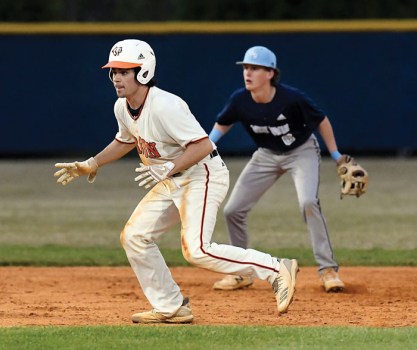 Carson's Cameron Burleyson will be playing for Catawba next. File photo by Wayne Hinshaw, for the Salisbury

CHINA GROVE — The future of Catawba’s baseball program got brighter when Carson battery mates Hayden Simmerson, a right-handed pitcher, and Cameron Burleyson, a catcher, signed as a tag team.

“I actually committed three or four weeks before Hayden did,” Burleyson explained. “He’d been trying to make his decision and one night he called me up and said, ‘Hey, let’s do it.’”

“The opportunity to throw to Cam for another four years was a part of my decision,” Simmerson said.

Obviously, these guys get along. They’re not just teammates, they’re buddies. They’ve won their share of games together.

There are an amazing number of Carson products already in the Catawba program, including standout outfielder Dylan Driver. Now the Indians add two more.

Burleyson showed baseball fans — and Catawba head coach Jim Gantt — last summer in American Legion baseball that he can help a college team. He’s an exceptional defensive catcher who swings the bat well enough to contribute offensively. Second on Carson’s team in runs scored and third in RBIs as a junior, he’s probably not going to mash balls over the fence, but he’s going to provide a lot of quality at-bats.

The 5-foot-10 Burleyson will be the first to tell you that the 6-foot-3 Simmerson is a guy who has the potential to do more than help. Simmerson looks like a Division I guy and Catawba should be thrilled to get him. You need some D-I types if you’re going to compete for D-II national titles, and Catawba goes into every season confident it will be a top-1o team, a team with a chance to win it all.

“There was some interest from two D-I schools,” Simmerson said. “But no scholarship offers. Just a roster spot as a preferred walk-on.”

Simmerson has a chance to be a stud, a horse, a bell cow, a dude for the Indians. He can throw low 90s and normally works in the 88-91 mph range. He makes a lively fastball look quicker with a curve, slider and changeup. He could be an All-South Atlantic Conference pitcher a few years down the road.

As a junior, Simmerson’s record was a deceiving 6-6.  The ball didn’t bounce his way much, but 117 strikeouts and a 1.36 ERA paint a better picture of what he can do.

“Hayden’s got the height, the arm, the pitches — and the bat — to make a major impact at Catawba,” Burleyson said.

Burleyson and Simmerson are part of the COVID crew. They lost all but a few games of their freshman season to the pandemic, then got to play only half of a high school season as sophomores.

So, while they are now seniors, they’ve only played one complete high school baseball season.  Simmerson and Burleyson spent the spring of 2022 battling neighbors South Rowan and East Rowan frequently. State champion South and East were elite teams in 3A.. Hits and wins against those teams weren’t easy to come by, but Carson did get a victory against South Rowan in the Easter Tournament in Kannapolis. Burleyson had the walk-off hit in the semifinals against Northwest Cabarrus, and Carson went on to take its first Easter tourney title since 2010.

Burleyson is a mature teen who has been through a lot.

“The COVID year, my arm strength just wasn’t there, so I rested my arm for a while and then blew it out completely when I started throwing again,” Burleyson said. “The doctor said the UCL joint in my right elbow was completely detached from the bone.”

Tommy John surgery, common for pitchers, but unusual for catchers, followed. Burleyson missed a “fall ball” season, but he was back behind the plate by the time Carson played the delayed 2021 half-season.

It has been a super-successful surgery. His arm is stronger than it was before the injury.

“My arm feels fine now, really good,” said Burleyson, who also plays basketball for the Cougars. “Seems like not that long ago I was this little freshman with a bad arm. So to be where I am right now, I’m thankful.”

It’s not easy to convince a young player to strap on catching equipment. Burleyson was primarily a first baseman and an occasional catcher growing up in the travel ball ranks, but there was a tournament where his team’s starting catcher couldn’t be there, and Burleyson stepped in. Since that day, Burleyson never has wanted to be anything other than the catcher. He found a position he’s passionate about.

“Catching is a defense-first position,” Burleyson said. “I love being able to control the game and I enjoy building a relationship with my pitcher, making a connection with him and helping him work through a lineup. I’ve got a strong enough arm for the position, but what I do best are the things that don’t get noticed a lot — blocking balls and receiving and framing pitches.”

Simmerson, on the other hand, does things everyone notices. He can walk out there and strike out 14 and he can win the game for himself with an extra-base hit.

He’s got a chance to be a two-way player for the Indians. He’ll probably get a chance to swing the bat some as a DH or corner infielder. Simmerson was Carson’s best hitter last season. He led the Cougars with 19 RBIs and walloped 15 doubles in a 29-game season.

“The most memorable game for me was when we played North Henderson in the playoffs,” Simmerson said. “Twelve strikeouts and a complete game, and I drove in a run in the first inning to give us the lead.”

Simmerson attracted interest from a flock of D-II schools as well as some D-Is in the summer due to his mound efforts for the 5 Star Carolina National travel team.

What ultimately swayed him to Catawba was a barbecue the Indians held. He got to hang out with potential new teammates as well as some former Carson Cougars.

“That was the night I knew Catawba was where I wanted to be for four years,” Simmerson said. “Just a great family atmosphere. And guys do get drafted from Catawba. If you’re good enough, they’ll draft you.”

Simerson credits the entire Catawba staff with helping to recruit him. Gantt applied the finishing touches on selling the school and the baseball program.

Like Burleyson, Simmerson is a smart student-athlete who will be a positive for Catawba off the diamond.

Simmerson will be a business major, while Burleyson plans to study kinesiology.

Simmerson is looking forward to making his Rowan County American Legion debut this summer. Burleyson will be there to catch him.