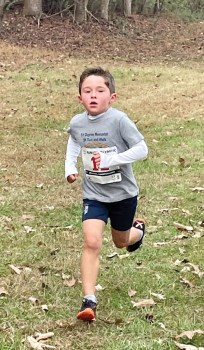 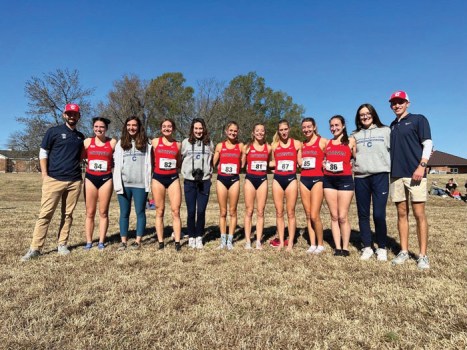 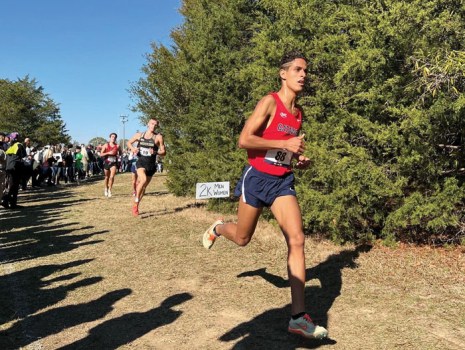 Oussama Ajala, the top male runner who will also compete in the Nationals as an individual. Submitted photos.

This past weekend was another exciting one for Catawba’s freshman phenom Madison Clay, their girls’ cross-country team and Frank Adams IV. I promised an update and there is plenty of good news.

Between the men’s and women’s teams last Saturday, Catawba had five All-Region selections, all finishing in the top 25 individuals.  Coach Jason Bryan said, “That’s the most in school history for us, making a very special day. Both the men and women ran with everything they had.”

The men just missed out by one spot on qualifying for nationals for the second year in a row, but sophomore Oussama Ajala (Gastonia) finished 7th and qualified as an individual. Other All-Region selections were Erick Ramirez (Dobson)(15th) and EJ Threatt (Pageland, SC)(20th).

Bryan continued, “The women had a historic day with Morganton’s Madison Clay becoming the first Southeast Region Champion in school history while leading the women’s team to a national championship birth with a 3rd place finish. Clay claimed SE region runner of the year honors as a freshman. Raina Andrews (Rock Hill, SC) finished 4th with another All-Region selection while Natalie Almond (Oakboro)(26th), Mikayla Jones (Aurora, Ohio)(27th), and Aislynn Reagle (Nashville, Tennessee)(30th) all finished in the top 30 to round out scoring.

The top three teams in the region get an automatic bid and the men’s team just missed out on an at-large bid. The national finals will be held in Seattle, Washington, on Dec. 2.

Madison Clay said, “I’ve been running on and off ever since I was very young, but I didn’t really get into the sport until my high school sophomore year. I had a wonderful coach who made everyone feel important, even if they weren’t overly fast. That really motivated me to keep going.” Clay dropped her 5K time from 29:58 during her sophomore year to 17:38 this year.

She continued, “On average, I usually run around 60 miles a week depending whether it’s a training or recovery week. I used to really enjoy biking and bike workouts, especially when I was injured for a period of time in high school, but I haven’t needed any cross training in a long while. In all honesty, I really just love the training, going outside and being with my teammates. The achievements and awards are more so an added bonus than anything else.”

Clay is much more than a runner and excellent student. She said, “Outside of running, I love music and art. I started playing the violin when I was 5 years old and the piano when I was 6. Then in middle school I picked up trumpet and ended up being in band/marching band all the way up through high school. I even auditioned and made it to the district level for trumpet (not to toot my own horn). To this day, I still love playing all three instruments and it brings me a lot of joy when I learn a new song.”

Frank Adams also loves running and has become a local favorite. He’s been training with a group out of Concord and has continued his improvement while running in the 8 and under USATF 2K division. Adams has won three consecutive races including the state and regional championships. He posted a time of 8:07.80 to win the regional in Greensboro last Sunday and has qualified for a trip to the Nationals in Texas.

Adams said, “This race was a challenge! I was competing against most of the boys I had raced against the last two races, and they were coming for me. I knew I had to go out fast and take the lead in order to win.”

Mom Allison Dupree Adams said, “Frank did a great job with his race plan. He got out to a fast start and made the others run his race. He pushed hard in the cold to get his personal best time in a 2K, equivalent to a 6:30 per mile pace. Frank definitely has the love of running, just like my dad (Ed Dupree), and works hard to achieve his goals.”

Next up for local runners and walkers is the Freeze Your Buns 5K in Spencer on Dec. 3. Look for this and other events at www.salisburyrowanrunners.org