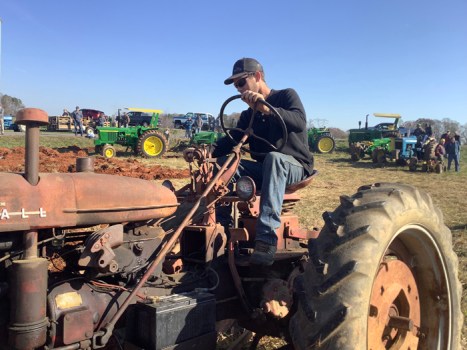 Ben Ketchie uses his Farmall 200 and 3-disc plow while other tractors wait for their turn. Ketchie is the son of original Plow Day founder Mike Ketchie who also adjusted the plow. David Freeze/For the Salisbury Post 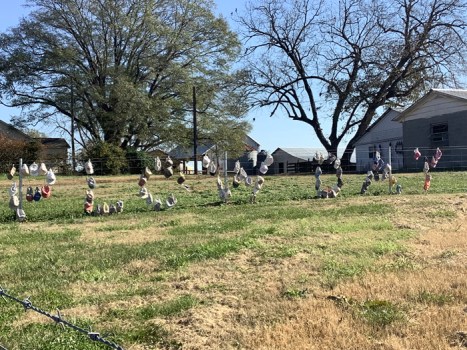 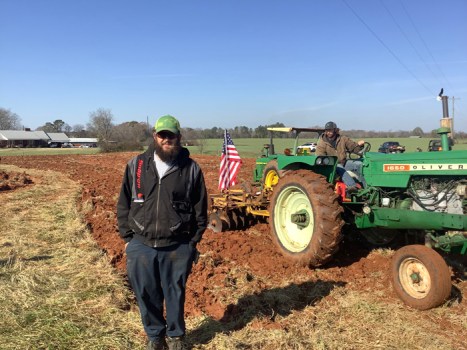 Darrell Anderson offered his land for a morning of plowing and socializing, David Freeze for the Salisbury Post

As the regular leader of the local spring tractor rides, he said, “All of these guys have tractors in the sheds, but most of them don’t really know the art of plowing. The farmers here who are getting up in age know how to plow, so we decided to get the toys out and play. These guys mostly came from within a 10-mile radius and all of them are feeling some stress from developers wanting to take their farmland. But we are all about farmland preservation and we’re on a crusade of getting the kids involved.”

Sloop credited Mike Ketchie, who with brothers Terry and Jerry Hoffner, helped start the original Plow Day back in 2014. Ketchie was a member of the Iron Pedalers, a group of antique tractor owners out of Concord. Ketchie said, “The Iron Peddlers were already doing something similar, but they wouldn’t bring their shiny tractors out on a day like this. We got it started, but when Terry and Jerry both passed away, everyone else sort of lost interest. Small family farms are just about gone, so we decided to get out here today. Last time we had it, there wasn’t as much plowing as there was socializing. There are no rules, the tractors and plows don’t have to be fancy, so they just run what they brung!”

Darrell Anderson, who works at James River Farm Equipment as a field mechanic, offered his land for Plow Day, He said, “Ryan wanted to do this and we’re glad to host everyone. We used to have pigs out here on this grassland. They constantly rooted around and roughed it up so bad that just driving across the ground was a rough tractor ride. They are plowing the grass under today and I’ll continue to work it up after everyone leaves.”

Anderson and his wife, Abigail, have 95 acres passed down from his dad and granddad. Anderson said, “I knew all along that I wanted to be a farmer, but dad told me to get another job first and I would be better off having something else to fall back to.” Anderson wanted to have his 1978 Case 2670 out with the others plowing today but couldn’t get it ready to run. Other farmers were also disking and cultipacking the ground after it was plowed.

Leo Spencer, originally from Michigan, came to Rowan to stay two years ago. He grew up on a dairy farm, but they didn’t plant crops. He said, “My wife and son didn’t like so much snow while we went back to Michigan for five years. Everybody there still plows but the ground works so differently. Most of the families around here use no-till methods so we don’t see much plowing. Rowan is a big farming community and I know 90% of these folks in my job as shop foreman at James River Farm Equipment.”

Holly Orel from nearby Bradshaw Road had the smallest tractor on site while using a 1966 lawn tractor and a single small plow. Orel and her husband Ben are into all things old and currently have 31 tractors dating from 1936 to the 1966 model that she was using. She said, “We have plenty of old cars and three planes on a small airstrip. We just restored a Stearman biplane. We just like to keep all these old things alive, and it’s the same with the plowing today. Nobody does it much anymore around here.”

Staley dairy farmer Gavin Langley said, “I just came here to have a good time. I know about 50% of these people but I understand the purpose for Plow Day. We used to plow about 50 acres a year and we’ve gone to no-till stuff now.” Langley used an International 756 and a three bottom plow as he was one of the last to turn the ground before lunch.

Sloop added, “We’ve been planning this since the spring tractor ride. Farming feeds us all and this is our chance to show one of the long-established practices and bring the community together today. Hopefully plowing is still around in 100 years but we’re hoping to keep having Plow Days in the fall for a lot of good reasons. It’s sure good to see the kids out here having fun with dad and granddad.”