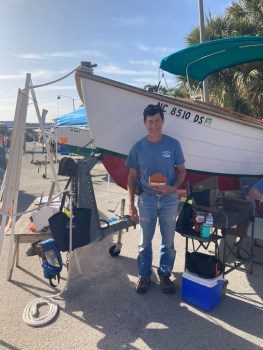 Alfred C. Wilson with the People’s Choice/Best in Show award his family won at the Southport Wooden Boat Show for their hand-built wooden boat, The Fair and Sweet. Submitted photo 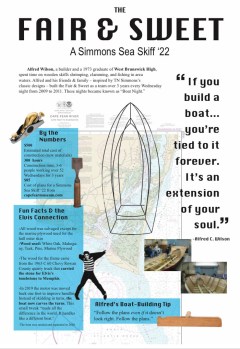 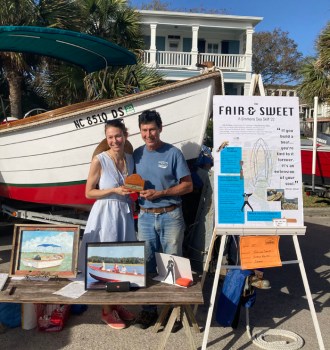 Author Amanda Wilson with her father, Alfred C. Wilson, stand by their family’s hand-built wooden boat, The Fair and Sweet, which took home the People’s Choice/Best in Show award at the 2022 Southport Wooden Boat Show. The author made the show poster highlighting the boat’s Rowan County “Elvis Connection.” Submitted photo 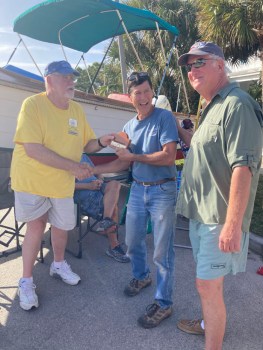 Southport Wooden Boat Show judges give Alfred C. Wilson the 2022 People’s Choice/Best in Show award as he stands by the hand-build wooden boat his family made, The Fair and Sweet. Submitted photo 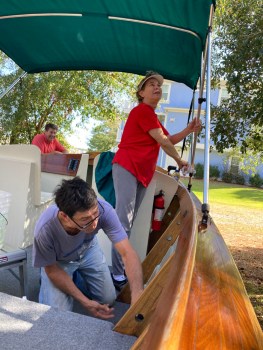 Alfred Wilson and his wife Lyn Wilson of Salisbury and his brother Russell Wilson of Lewisville prepare The Fair and Sweet for the 2022 Southport Wooden Boat Show in Southport. The boat won the People’s Choice/Best in Show award. Submitted photo

It was late in the summer of 1977 and a C-60 Chevy flatbed truck kicked up a cloud of dust as it rumbled out of the Rowan quarry. The truck was on a long journey to Memphis, carrying in its wooden truck bed the granite stone that would mark Elvis’s final resting place.

Flash forward to Saturday, Nov. 5. A Salisbury man with a shock of jet-black hair stood beaming by a bright red 22-foot wooden Simmons Sea Skiff. His family built it by hand, and it had just won the Southport Wooden Boat Show’s prestigious 2022 People’s Choice/Best in Show Award — two awards in one!

That man is my father, and the structural wood for the boat came from the C-60 Chevy flatbed truck that is said to have carried Elvis’s tombstone to Memphis. My father bought the truck from a farmer who bought it to use as a farm truck.

Dad eventually stripped the old wood from the truck for a family-boat building project. Dad and his brothers, uncle, cousins and family friends launched the boat project so they could spend more time with my grandpa, the late George F. Wilson and former band director at Salisbury High School. That was the beginning of “Boat Night.”

It took three years, working every Wednesday night from 2009 to 2011, but they did it. And maybe it was the “Elvis Connection” ­— as my father tells it — or the inspiring story of a family building a boat from nothing but an $85 set of plans, salvaged wood, determination and time. Whatever the reason, after 10 years of entering the boat show, this was our boat’s year. Out of 47 boats and 10,000 attendees, “The Fair and Sweet” finally sailed home with the big prize.

The boat’s name — “The Fair and Sweet” — is an homage to boat-building terms and was chosen by our cousin Virgil Wilson, who will eventually get custody of the boat.

I’m pretty sure the big show poster I made — with the picture of Elvis and the headline “The Elvis Connection” — didn’t hurt. It was part of my belated contribution to the boat project and I decided to go all in.

The vision for the poster came to me in snapshots: a map of the Cape Fear River, the shape of a boat, sections for By the Numbers and Fun Facts, and Elvis dancing off the page. Not being a designer, it took me a full day and some pain, but I pieced together the giant 24- by 36-inch poster and set out to find a print shop.

Printing can be costly in Washington, D.C., where I live, so I price compared printing at two shops. One print shop quoted $29 and the other $49.

“I got another estimate for $29 so I think I will print with them because it is a better value for my budget,” I wrote to the more expensive print shop.

“Wish we could match that price,” wrote a man named Mike, adding some notes about his shop’s local ownership and living wages. “I know our Epson prints fantastic on Epson Photo paper.”

I took exactly three minutes to think it over. How much did I want to win?

“I changed my mind,” I emailed back. “I’ll print with you, and I’ll take two copies.”

Two days later I was on my way to Wilmington with a large poster tube with my name and phone number scrawled across it, in case it got lost. My heart skipped a beat and I broke out into a cold sweat when the TSA agents took the tube from me to send it through another scanner (apparently only some scanners can scan loose objects.)

When I finally landed at the N.C. beach, the work was just beginning. On the day of the show, I put on a blue seersucker dress and stood in front of the boat to talk to folks about the boat. I played Elvis’ greatest hits from a mini-Bluetooth speaker.

“All of the structural wood for the boat came from the truck that carried Elvis’s tombstone straight to Memphis from Rowan County,” I drawled for groups that gathered to gaze at the boat. Was that a Southern accent creeping into my voice?

“I really don’t actually think it could have gone straight there,” Dad whispered to me. “They would have had to stop to go to the bathroom and refuel.”

The Elvis story was getting more and more elaborate, but the horse was already out of the barn. I was leaning in.

“That’s eight degrees of separation!” I heard a woman say to her friend when she heard our Elvis story.

“That’s very true, but you have to use what you have,” I interjected. “Would you consider voting for our team in the People’s Choice Award?”

The woman nodded and smiled.

“Elvis thanks you!” I exclaimed.

Was hers the vote that gave us the winning edge? We’ll never know.

After the trophy was won, the boat was put away, and everyone was home from the show, Dad texted me with an issue. Two people had pointed out a math error in our poster’s By The Numbers section related to the amount of time it took to build the boat. I had put 300 hours, but counting all the people, it was probably closer to 1,200.

Dad conceded that of those hours, 300 was probably the time spent actually working.

Looking back, putting a numbers section on the poster was just asking for trouble. How many laughs went into that boat? How much love? When it comes to building a boat, some things can never be counted, and those are the things that count.

Amanda Wilson is a writer originally from Salisbury. She lives in Washington, D.C.