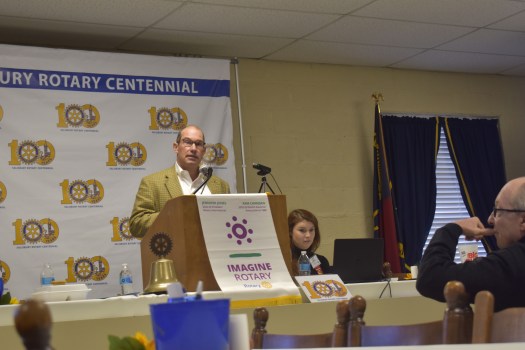 Jason Walser, executive director of the Blanche and Julian Robertson Family Foundation, gives a speech at the 25th anniversary celebration at the Rotary Club of Salisbury. Charlie Drape/Salisbury Post 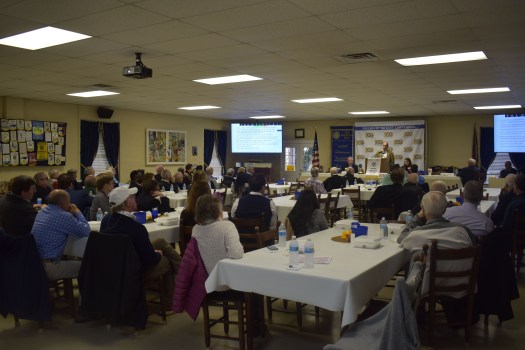 The 25th anniversary of the Blanche and Julian Robertson Family Foundation gathering at the Rotary Club of Salisbury meeting. Charlie Drape/Salisbury Post

SALISBURY — More than 50 people convened at the Rotary Club of Salisbury on  Tuesday to celebrate the 25th anniversary of the Blanche and Julian Robertson Family Foundation, a philanthropic endeavor started by billionaire and Salisbury native Julian Robertson Jr., who passed away this year at the age of 90.

Jason Walser, a native of Statesville and the executive director of the foundation for the past five years, gave a speech and PowerPoint presentation that commemorated Robertson and the work he and the foundation have done to help Salisbury.

To start off the presentation, Walser played a recording of Robertson talking about his love for his hometown: “It was a blessing growing up in a small town, Salisbury, North Carolina. If it were up to me, everyone would have to grow up in a small town, and Salisbury was an especially attractive one. My parents were marvelous. I think they imparted to all of us children how vital it is to be interested in your community.”

The foundation was established by Robertson and his wife, Josie, in 1997, said Walser, when Robertson announced his intention to start awarding grants to the organizations and issues in Salisbury that he and his board thought were the most crucial. Robertson endowed the foundation with an initial gift of $18 million and awarded 43 grants in 1998. Since then, Robertson has given an additional $18 million over 25 years, totaling $36 million, to organizations and nonprofits.

“He gave that money in honor of his parents, but he also gave it for us because he believed in this small town,” Walser said.

The foundation’s name is in honor of Robertson’s parents, Blanche and Julian Robertson Sr.

Blanche Robertson considered herself a “local activist” and was one of the founding members of the Historic Salisbury Foundation, while Robertson Sr. was a successful executive in the textile business. Together, they had three children: Julian Jr., Blanche and Wyndham.

Wyndham Robertson continues to work with the foundation, serving on the board of directors, along with two of Julian Jr.’s sons, Spencer and Alex.

Walser said one of the major focuses of the foundation, and especially important to Robertson himself, was awarding grants that would help improve education. Another initiative that the foundation is keen to keep supporting is Salisbury’s Historic West End, with more than 30 houses receiving exterior improvement grants.

Other community projects the foundation will continue to support in the future is the restoration of the Monroe Street School, after school programs, Happy Roots community gardens and improvements at Bell Tower Green, among others.

“We will also continue to support quality of life initiatives, leveraging funds from outside of town, and we will continue to work on the West End and other places,” Walser said.

Walser ended his presentation wondering how the foundation can develop “the next Julian Robertsons.”

“How do we develop this entrepreneurial spirit in the next generation of businesses and civically engaged people and people who love this community and want to give back?” Walser pondered.

Economic development was his answer and he said the foundation’s vision moving forward was creating a Salisbury that had a sense of creativity and energy.

“Salisbury has a bright future and we are going to continue to build it from the ground up,” said Walser.