Training leaves participants confident they can defend themselves 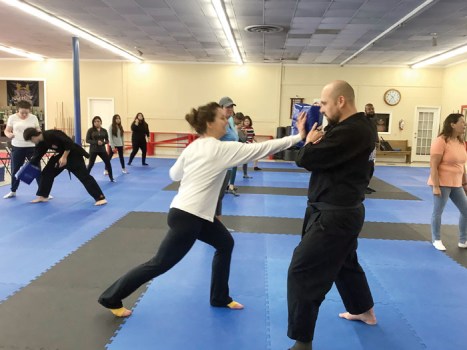 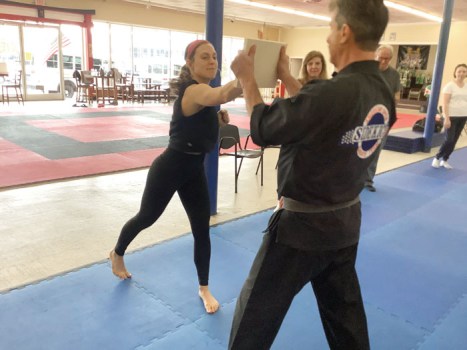 Ryley Corriher breaks a board near completion of the class. Photo by David Freeze 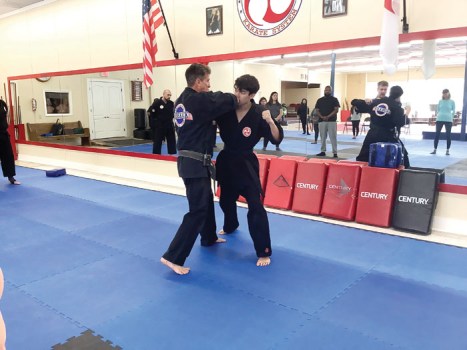 Ricky Smith shows how to use the elbow as a weapon on Sensei Ryan Stopper. Photo by David Freeze 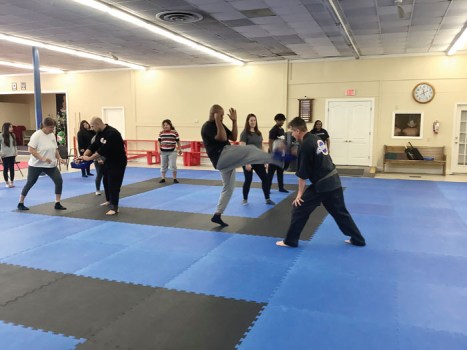 SALISBURY — Twenty women and two men met at Sidekick Karate on a recent Saturday morning ready to seize the opportunity to learn the basics of self-defense. After several women runners were killed earlier this year, it sparked action among them all to put aside fear and be prepared to turn the tables on any attacker.

The recent wave of concern had already sparked a memorial run at 4 a.m. in Salisbury to honor Eliza Fletcher, a teacher and young mother who went for her last run at that time on Sept. 2 in Memphis, Tennessee. Her body was found at noon. Just two days before the training session, a New York City woman left for her run at 6 a.m. and was raped and robbed but was able to fight off her attacker.

Ages ranged from late teens to mid-60s as Smith told the participants to take off their shoes and get on the mat. He began by saying, “These brutal assaults are happening more often. If you don’t feel like working out, just buy a weapon and go home. But if you want to be accountable and want to gain confidence, you’re where you need to be.”

Smith, along with Senseis (teachers) and Black Belts Shawn Bolick and Ryan Stopper, put the participants in long rows and said, “You are most likely not going to be attacked because these assailants are looking for easy prey. Don’t look down and away, show confidence and face them. Never let them get you in a vehicle because nothing good will happen if they do. If they see you drop into a confident fighting stance with your hands up, that might be enough to deter them. Get ready to drive the heel of your hand through their nose!”

With an easy delivery of information, encouragement and scripture mixed in, Smith gave simple pointers and demonstrated various moves. He said, “You want to stun and drop them, use your elbow for your best weapon, take an eyeball and a testicle if you have to.” He demonstrated techniques to do all of these.

Participants practiced by punching and kicking pads that the instructors carried. As intensity increased, Smith added, “Use proper form, stay relaxed and drive your energy through him, use your elbow if he’s close.”

Demonstrating the ways that an assailant might grab his prey, Smith showed how to escape from a wrist grab, the most common initial move. And he added, “If he grabs you from behind and close, drive your head backwards into his nose. Then use the best defense you have, run and get away.”

Both Ricky and Edie are avid runners. Edie reached elite status in her Georgia high school and college running career before coming to the Charlotte area and competing regularly in the Piedmont Carolinas. They started the China Grove 5K over 20 years ago as owners of the original Sidekick Karate location in China Grove.

The Smiths listed ways that runners and walkers could help themselves to avoid an altercation. Be aware mentally of your surroundings. Antennas need to come up and don’t be afraid to be rude to avoid a possible situation. Ricky Smith said, “Be rude, get loud and confident, point and make them back off. Don’t get too close when they ask for directions or the time. The physical part comes last.”

Nursing student Ryley Corriher said, “Not only did I have a lot of fun during the self-defense class, I left with confidence knowing that if I was ever in a dangerous situation, I would have a much better chance of defending myself. Prior to signing up for the course I was not even sure if this was something I wanted to participate in, but I realized that I needed to start taking my safety into my own hands. This was the first step in doing so. The training session was serious, but it had a twist of fun and exceeded my expectations!”

Realtor Pam Allred found unexpected success and power as she practiced striking back. Pam said, “It was very informative and fun. I have told some of the ladies I work with that they should take this class. I loved how we started out with prayer and how Ricky weaved scripture and the mind, body, spirit connection throughout the class. Practicing the moves he showed us was very helpful. Target the eyes, nose, knees and groin, and then as soon as you are free…run! I want to take up karate.”

Edie Smith said, “I think the participants increased their confidence by learning how to avoid common situations, how to stay mentally alert, and how to perform simple techniques that could ward off an attacker. You must have the mindset to fight back if necessary.”

Ricky added, “It was an excellent opportunity to teach a diverse group of people who enjoy the freedom of exercise that we do not have to live in fear. The Bible states in 2nd Timothy 1:7 that God did not give us a spirit of fear, but of power, of love and of a sound mind. I love the people in our community and want to help everyone know that they can defend themselves in any situation.”

As a parting test and affirmation of what attendees had learned, the Smiths had every participant break a board with the heel of their hand. Ricky said, “And with that same power, you can break a nose!”