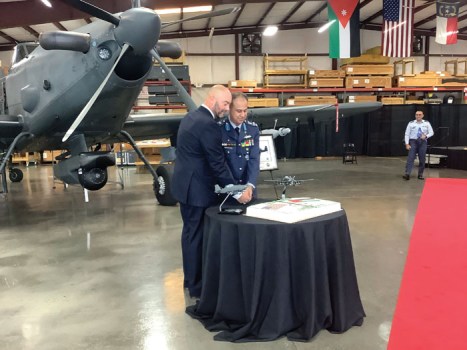 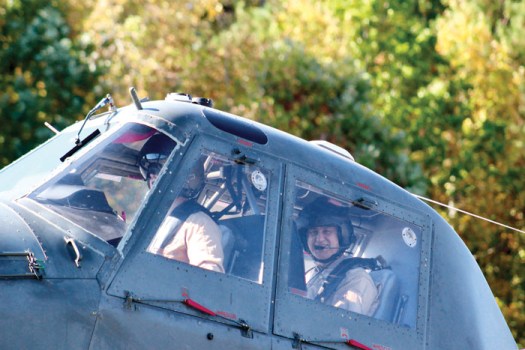 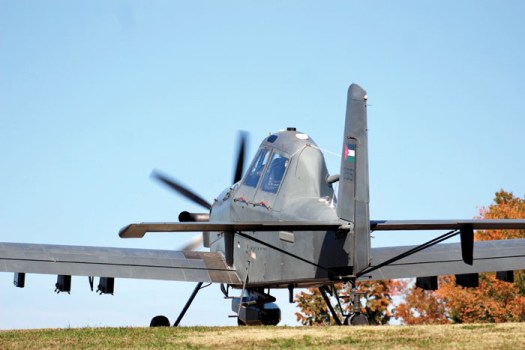 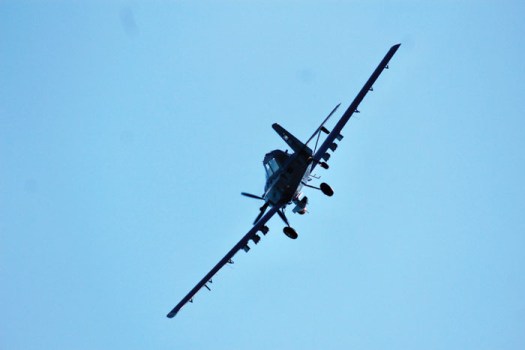 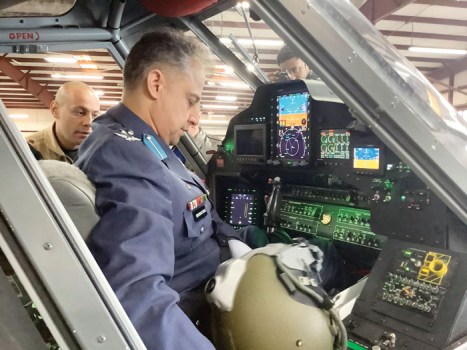 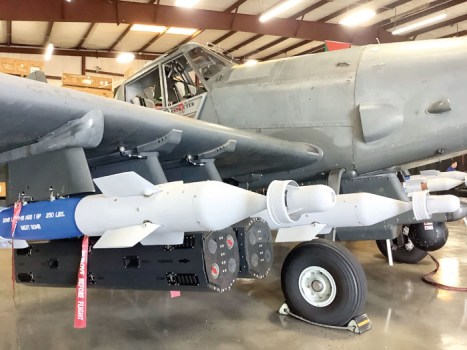 MOORESVILLE — Various Jordanian Air Force personnel were in Mooresville on Friday to commemorate the upgrade of the first of six AT-802 border patrol aircraft at the IOMAX USA headquarters at Lake Norman Airport. Brigadier General Mohammad Fathi Hiyasat, the Royal Jordanian Air Force’s commander, led a contingent that included pilots, maintenance personnel and other officials from his country for the commission ceremony. About 30 IOMAX employees joined with various dignitaries and invited guests for the ceremony that included a cake cutting, luncheon and demonstration flight.

IOMAX USA is a global provider of aerospace, surveillance and weapons system design, manufacturing and integration. The company delivers weaponized aircraft and related systems that are specifically designed to meet security challenges, primarily to combat terrorism and help with drug law enforcement.

KC Howard, IOMAX USA chairman and CEO, said, “Today is a celebration. Required to complete this project are trust, drive, a level of experience and professionalism, safety and finally to train and transfer knowledge.”

Hiyasat, himself an F-16 fighter pilot, added, “I thank IOMAX and the Jordanian Air Force for working as a team. IOMAX has always been a trusted partner. Our next celebration will be in Jordan and all of you are invited.”

Howard’s father started the company in Denver in 2001 at his condo in an apartment complex. In Mooresville, Howard has rebuilt and grown the company. Egypt and the United Arab Emirates are other allies who use IOMAX planes and technology.

Jamie Bishop, IOMAX vice president of engineering and a Mt. Ulla resident, has enjoyed the continued partnership with Jordan and looks for more opportunities with them in the future. He said, “Over the past year and a half, we have worked closely and well together. They are down to earth, hard working and intelligent.”

Bishop credits Lt. Colonel Tariq Hammouri, the Jordanian liaison officer for the IOMAX project, for the latest activities. Bishop said, “We have exemplary communication with Jordan already, but it definitely helps to have someone on site to speed up the process.”

Several rotations of pilots and technicians from Jordan will be training at the Lake Norman facility.

Over the past 12 years, IOMAX has delivered 48 Border Patrol and Archangel aircraft to the air forces of multiple U.S. allies. The company also provided associated equipment, training and post-delivery support. IOMAX aircraft have flown over 4,500 combat sorties, guiding over 3,000 Paveway II bombs, 200 70mm rockets and 100 Hellfire missiles toward terrorist targets throughout the Middle East and North Africa, while maintaining an operational readiness rate exceeding 90%. At about $12 million each, Bishop said the Jordanian planes are the most advanced to date and are equipped with the latest technology.

Air Tractor planes are the aircraft IOMAX uses because of their long-range capability, payload capacity and big wings to mount the weapons systems. The Air Tractor aircraft are nimble yet can reach an altitude of 20,000 feet. They can be carried to an area of need by C-17 transport planes and other large cargo aircraft. They can stay in the air longer with their large fuel capacity and carry more weight than other aircraft in its class. Other models of Air Tractor planes have long been a staple for agricultural use, including crop dusting and spraying, along with recreational use such as towing gliders for takeoff.

The plane as outfitted by IOMAX is a two-seater with the pilot in front wearing a special helmet fitted with an eyepiece for a head-mounted display of aircraft speed, heading and weapons. An EO/IR infrared sensor camera is mounted under the fuselage of the plane and uses intelligence, surveillance and reconnaissance (ISR) technology for precision strike capability. The rear seater, designated the weapons systems officer, operates the camera, valued at about $1 million each, and a laser to lock the weapons on the target until the pilot fires them. The plane can also be flown from the rear seat.

IOMAX has 32 employees, all in Mooresville except an Egyptian and an Emirate who represent the company’s interests in those countries.

Seamus Flately, vice president of business development said, “We are pursuing several opportunities across Africa and the Middle East as well as in the Asia Pacific region. Some of these opportunities involve future work with existing customers and others are new pursuits that involve our aircraft and opportunities to offer technical services on other aircraft.”

He continued, “We believe our business model is unique to the industry, particularly when it comes to the upgrade of aircraft. In these cases, we develop the technical expertise alongside our customer during the upgrade of the first two aircraft. On all subsequent aircraft we travel to the customer’s facility and advise and assist as necessary as the customer completes the upgrade on their remaining aircraft. This end result reduces cost as the customer gains new technical skill and a better understanding of the aircraft. A strong partnership develops between IOMAX and the customer, which we believe is the most important aspect of our business model and a key differentiator for us as a small business.”