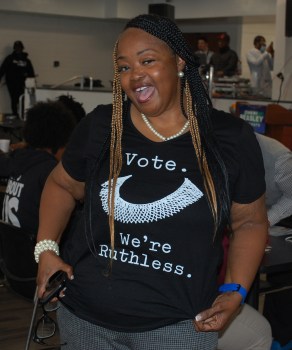 Passionate supporters for Cheri Beasley were on hand for her appearance. 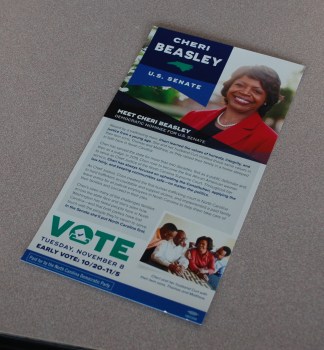 These brochures were handed out to people in attendance before Cheri Beasley arrived. 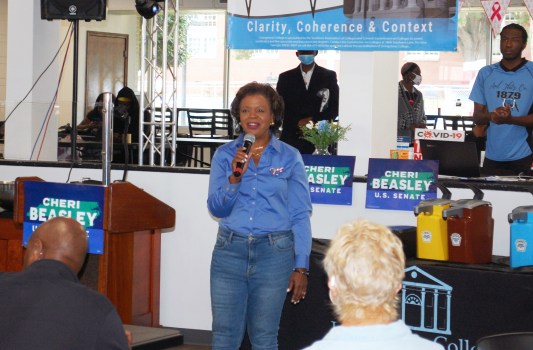 Cheri Beasley was the first African American woman to serve as Chief Justice of the North Carolina Supreme Court.

People were packed into Aggrey Student Union to hear Beasley, who is running against Ted Budd, the Republican who also seeks to take over as Sen. Richard Burr leaves office. Music entertained the crowd beforehand and tables were set up where people could register to vote. Afterwards, Beasley took time to meet and take pictures with anyone who wanted one.

Beasley served as a district court justice and as a judge on the state Court of Appeals before being appointed to the N.C. Supreme Court in 2012, where she was chief justice from 2019 to 2020. During her speech, Beasley said her late mother would say that “every election is the important election of our lifetimes.”

Beasley is still trying to get that message across to everyone in the state this year.

“As I travel to all of our 100 counties, people are so concerned about rising costs and they’re feeling everything from paying at the pump to the cost of prescription drugs and everything in between. So many people working two or three jobs to take care of their families and they want to know that the next senator is going to fight hard for North Carolina and for all of North Carolina,” Beasley said.

With interest rates and rent prices increasing, the cost of living has become a major issue this year for politicians.

“I think the Senate really has to also be engaged in incentivizing, to make sure that folks really can have affordable housing. We know that’s an issue all over the state. We know that there are police officers and firefighters and teachers that don’t have housing and that’s not acceptable,” Beasley said.

Getting the best education for students is another key issue, especially with test scores in Rowan-Salisbury schools falling below the state average. .

“We care a whole lot about our students and what we know is through the pandemic a lot of children did not have access to broadband or to the technology for virtual learning and a lot of the teachers didn’t either. So I really believe the Senate has an obligation to fund schools, students, teachers and families to make sure that children can be successful,” Beasley said.

Election Day is on Tuesday, Nov. 8.