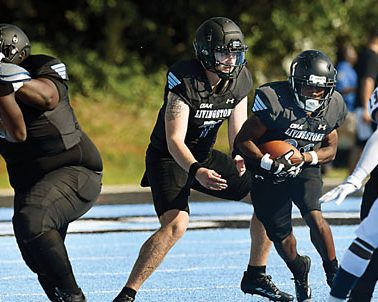 SALISBURY — The Livingstone College Blue Bears are only a three-point underdog this week.

What makes that noteworthy and newsworthy is that the opponent is Winston-Salem State.

Kickoff on the blue turf at Alumni Memorial Stadium is at 1 p.m. It’s Senior Day and Community Day.

Livingstone’s most recent wins against the WSSU Rams came in an era when Livingstone was tough for anyone to handle. Late 1990s, the days of coach Rudy Abrams and running back Wilmont Perry. LC beat WSSU three straight in 1996, 1997 and 1998. That exciting 38-33 win in 1998 was the last one for the Blue Bears in the series.

The programs haven’t played every single year — Winston-Salem experimented with Division I for a while — but Winston-Salem State has now won 18 in a row against the Blue Bears. That includes a 21-0 victory in 2021. The all-time series now stands at Rams 44, Blue Bears 11, with one tie.

Winston-Salem State probably is Livingstone’s second-biggest rival in the CIAA, after Johnson C. Smith, but it’s hard to build up a game as a rivalry game when the same team wins it every year. Livingstone (1-4, 0-3) would like to change that narrative, would like to restore a series that is important to both schools to legitimate rivalry status.

They have been the CIAA’s worst passing team. They have a decent running attack, featuring Asa Barnes, but they are near the bottom of the league in most offensive and defensive statistics.

A factor in that rough start is that the Rams still haven’t played a home game. Hurricane Ian canceled last week’s planned homecoming festivities against Lincoln.

Officially, WSSU’s loss at Central State was a neutral-site loss, but it was played in Canton, Ohio, and Central State is in Ohio, so it was a lot more of a road game than a home game for the Rams.

The loss at N.C. Central was a sure thing. The loss at Chowan was understandable.

But the 20-17 loss at Elizabeth City State had to be disappointing for the Rams.

Livingstone has just finished with a brutal three-week stretch in which it played three of the top seven teams in the Division II HBCU poll. Predictably, things didn’t go all that well for the Blue Bears against Virginia Union, Virginia State or Bowie State.

If Livingstone can improve on third-down conversions and pass protection, it could be enough to beat Winston-Salem State.

Livingstone has converted 25 percent of its third-down situations and has allowed 21 sacks. Both of those figures are among the worst in Division II.