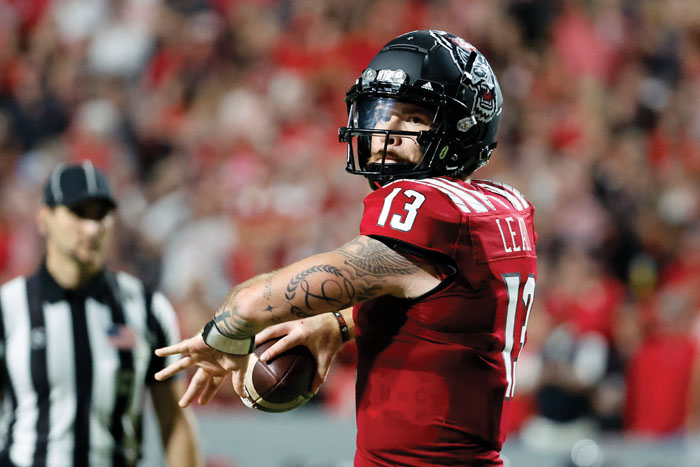 North Carolina State's Devin Leary will have surgery and is out for the season. (AP File Photo/Karl B DeBlaker)

RALEIGH — North Carolina State’s offense has yet to find a consistently strong form. That has to change, starting Saturday night against Florida State.

The 14th-ranked Wolfpack (4-1, 0-1 ACC) lost last weekend at No. 5 Clemson in a key matchup for the league’s Atlantic Division race. Offensive issues stood out, starting with an ineffective running game along with the inability to attack downfield.

N.C. State is ninth in the 14-team ACC in scoring (32.8) and 10th in total offense (384.6) despite the presence of the preseason league player of the year in quarterback Devin Leary. It needs more, particularly with the Seminoles (4-1, 2-1) arriving with their only loss coming last week to No. 15 Wake Forest.

Receiver play stands out, though coach Dave Doeren pointed to more than that.

“We win a lot of 50/50 balls here, we have for a while,” he said. “We need to get back to that. And it’s not just on the receivers or the tight ends or the backs. It’s the entire offense: give the quarterback a chance to make that throw and then go up and finish the play.”

The Wolfpack sputtered through the second half of the opener at East Carolina and barely avoided a stunning upset. The team lost top target Emeka Emezie from last year and has Thayer Thomas as a reliable midrange threat. Other receivers like Devin Carter offer flashes on the outside. But those plays aren’t coming regularly enough.

Florida State quarterback Jordan Travis isn’t having the same troubles finding downfield success as Leary. The fifth-year passer, who started his career at Louisville, leads the league and is tied for eighth in the Bowl Subdivision ranks by averaging 9.7 yards per pass attempt. His 14.77 yards per completion is an ACC high and 10th in FBS.

Wake Forest showed it could respond after a crushing loss. The 15th-ranked Demon Deacons now have something else to prove: that they can play better defense against Army on Saturday after surviving last season’s frustrating shootout.

The Demon Deacons (4-1) won last year’s game 70-56 in a wild afternoon at Michie Stadium thanks to an offensive output that stood as the program’s best of the modern era. They’ll get another try at slowing the Black Knights (1-3) as they step out of Atlantic Coast Conference play after last weekend’s win at Florida State.

“Sometimes there’s games you win and you’re relieved, and that (FSU) game was pure joy,” Wake Forest coach Dave Clawson said. “I think (it’s) one of the biggest wins we’ve had here, and so much of it was because of the circumstances.”

And yet, Clawson admitted to feeling angst when reviewing last year’s film of the Army shootout — “one of the most torturous games I’ve ever been through.”

The Black Knights ran for 416 yards. And their 595 yards were the most allowed by the Demon Deacons all year, a jarring performance in an 11-win season that included a trip to the ACC championship game.

“We understand the only reason it was close was because of us,” Demon Deacons linebacker Ryan Smenda Jr. said. “The offense put up (70) points and a triple-option team putting up 56 points, I feel like that’s kind of unheard of. And they did it against an ACC team.”

Army would love to find that kind of flow again. The Black Knights are off to their worst start since 2015 and have lost all three games against Bowl Subdivision opponents.

“We’ve got pretty high expectations around here, pretty high standards for the way we perform,” Army coach Jeff Monken said. “This team has won a lot of football games over the last four, five, six years. We’ve tended to find a way to win those games through gutting it out, being gritty and tough. And we haven’t found a way to do that.”

Wake Forest is tied for 16th in the FBS in scoring (40.4) and has amassed 202 points so far, a program record for the first five games in any season.

Army has its worst start since losing its first three games and opening at 1-4 in 2015, which ended with a 2-10 record.

Wake Forest is 12-5 in the series, including 6-1 at home against Army. The lone loss came in 2016, which was the Black Knights’ last trip to Winston-Salem.

Line: Wake Forest by 161/2 , according to FanDuel Sportsbook.

It’s the Atlantic Coast Conference opener for the Hurricanes. North Carolina has won three straight in the series and no team has ever won four in a row during the Hurricane-Tar Heel rivalry. Miami is coming in off a bye.

North Carolina QB Drake Maye is the frontrunner for ACC rookie of the year honors, with 19 touchdowns and just one interception so far.

Line: Miami by 31/2, according to FanDuel Sportsbook.

The Jackets are without top safety Jaylon King, who underwent right leg surgery and is likely done for the season. King had 32 tackles in five games, most among the secondary, one interception and a forced fumble. Freshman Clayton Powell-Lee will replace King.

In his first year as a starter, Duke QB Riley Leonard leads the ACC and ranks eighth nationally with a 72% completion rate. He ranks fourth in the conference in total offense after compiling 1,176 yards passing and 260 rushing and has completed 18 passes of at least 20 yards.

Georgia Tech LB Charlie Thomas had seven tackles, an interception and a fumble recovery in the second half at Pitt. The only thing holding him back is targeting penalties. He’s had to sit out the first half of two games. One more, and he’ll have to sit out a full game.

Line: Duke by 3½  points, according to FanDuel Sportsbook.