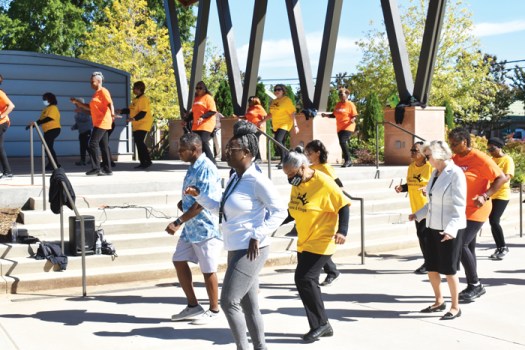 Mayor Alexander, center in white, was game to learn the line dancing from Vanessa Lawler, teacher of the Dancing Queens and Kings group. Photo by Elisabeth Strillacci/Salisbury Post 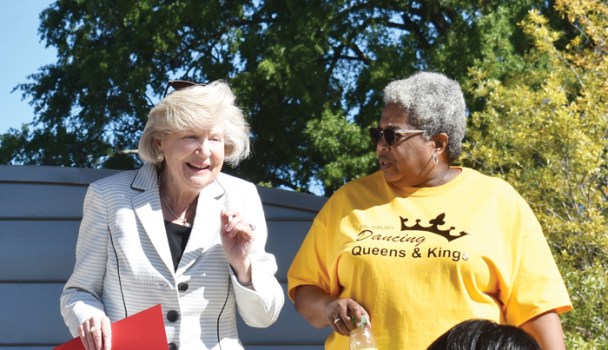 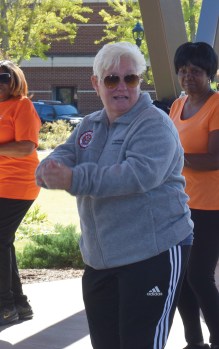 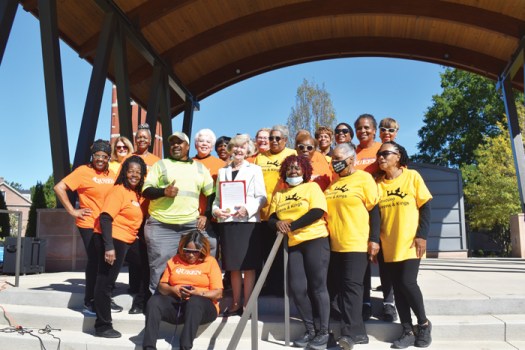 Mayor Karen Alexander surrounded by members of the Dancing Queens and Kings for Tuessday morning's Move with the Mayor event at Bell Tower Green. Photo by Elisabeth Strillacci

SALISBURY — The city has for several years worked on helping residents get healthy, and now the city’s leadership, including the mayor and city council, is partnering with the National Forum for Heart Disease and Stroke Prevention’s “Move with the Mayor” initiative to encourage residents to protect and improve their health.

“We are so excited to partner with ‘Move with the Mayor,’ a national non-partisan program, that supports the health initiatives through mayors and councils for their citizens in cities across America,” Alexander said. “Recent health data in Rowan County suggests that our neighbors could also benefit from increased physical activity to improve their health outcomes. When we talk about the health and safety of our residents, it’s not just in terms of public safety. We’re also talking about their physical health and ensuring they have those opportunities to become a healthier person, mind and body.”

The national initiative works with mayors across the country to challenge their communities to be more physically active to lower their chances of heart disease and its risk factors like high cholesterol, high blood pressure and diabetes.

Vanessa Lawler, who took over teaching the line dancing classes from the founder of the Queens dancing group Mae Carroll in 2019, said the group is “seniors exercising, trying to stay healthy, but having do much fun doing it.” Classes meet every Tuesday and Thursday from 10 a.m. to noon and all are welcome, she said.

“So many people come in and say ‘I have two left feet,’ and I always tell them that’s OK, because I have a box of rights over here and I’ll get you one,” laughed Lawler. “I’m diabetic, and when they started talking about insulin, I said I’d better dance a little harder.”

“This is so exciting,” said Alexander, who, after reading a proclamation on the day and the partnership, joined in on the line dancing. “It’s wonderful, so healthy and so fun, and so giving.” She praised Tina Abraham, one of the dancing Queens who stood by the mayor to make sure she was getting the steps as she went along.

Sheffield, who joined in the dancing as well and seemed to quickly grasp the steps, said she “wished more would come out and do this. We want to be a healthy Rowan, and this applies to all ages — it’s fun! And it’s hard to be in a bad mood when you’re dancing.”

The Move with the Mayor partnership includes free access to the Spark260/PeopleOne App for residents or employees of businesses within the city. Participants can use features such as joining annual calendar events, a nutrition tracker, SparkCoach, and digital health assistant.