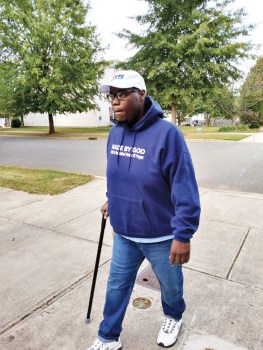 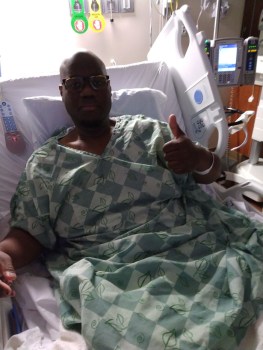 SALISBURY — Craig Watson knew he had a knot on his back but thought it was a pulled muscle. It grew in size until his mother pushed him to see their doctor. Non-Hodgkin’s Lymphoma was the culprit and Craig has been in treatment since October of last year. Medical expenses have continued to pile up.

The 14th annual Grace Lutheran Church fish fry will be held at the church on Saturday, Oct. 8. All proceeds from the fish fry, a basket raffle and John Deere Gator raffle go to Watson to help with those mounting bills. Serving begins at 4 p.m. and lasts until the fish sells out. As director of one of Rowan County’s largest fundraisers, Mike Yost said, “Our volunteers are ready to handle a huge turnout for fish and fixings by eat-in, pick-up and drive-thru. We are blessed to be able to do this for Craig.”

Lymphoma made Craig tired, and he had night sweats, lost some weight and wanted to sleep a lot. Craig found the knot on his back that wouldn’t go away in October 2021, but chemo worked and his scans improved as the lymphoma went into remission. Then came March 23, and Craig couldn’t move his legs due to the location of a specific tumor in his thigh. He began radiation in April and chemo followed in early May. Craig spent two months at Presbyterian Hospital in Charlotte and another month in rehab.

Regularly employed since 2016 at the UNC Nutrition Research Institute in Kannapolis, Craig splits his time between shuttle driver and working in the café. He lives in Huntersville with his mother Alfreda Cannon. Now 38, his scans are improving again, and Craig has transitioned from a wheelchair to a walker and currently to a cane. If his progress continues, Craig hopes to return to work in early December. His mom, Alfreda, said, “Craig loves his job and all the employees at NCRI have all been very generous, supportive and kind to Craig. He is excited about going back to work.”

Craig regularly attends church at the United House of Prayer for All People in Mallard Creek, but he was joined his mother for a service at Grace Lutheran Church on June 26, where he was announced as this year’s recipient of the fish fry proceeds. His mom said, “I have seen Craig cry only twice as an adult. Once when his father passed unexpectedly a few years ago and the second time when he found out he was selected as the recipient of the proceeds.”

Craig said, “I just cannot believe how loving everyone is at Grace Lutheran Church. I feel so welcome and most of all loved by people who do not even know me.”

Alfreda added, “Craig’s smile is what gives me strength. Throughout his illness his smile is always noticed by his doctors, nurses, family, friends, and other patients.  We both are so thankful for Grace Lutheran Church and all the members, sponsors and friends who have contributed to the Grace Lutheran Fish Fry.”

In addition to Craig, Alfreda, family and friends attending the fish fry from the immediate area, additional family members and friends are set to arrive from Florida, Ohio, South Carolina, Georgia, Virginia, Maryland and Washington, D.C. Alfreda said, “They are all excited about attending this event for the first time.”

“Craig is a person that lives by faith, love and patience. He will tell anyone how important God is in his life. Craig has no anger for what happened to him and believes his illness has brought him closer to God, his family and friends.”

Another event leader, Robin Bernhardt, said, “Craig was nominated by a member of the church congregation, one of several applicants submitted. After careful consideration, he was the recipient chosen by our nomination committee.”

Winners will be drawn the same evening for the raffles. A parking shuttle will be available. Fish plates also include slaw, fries, dessert and drink. Hot dogs will also be available.