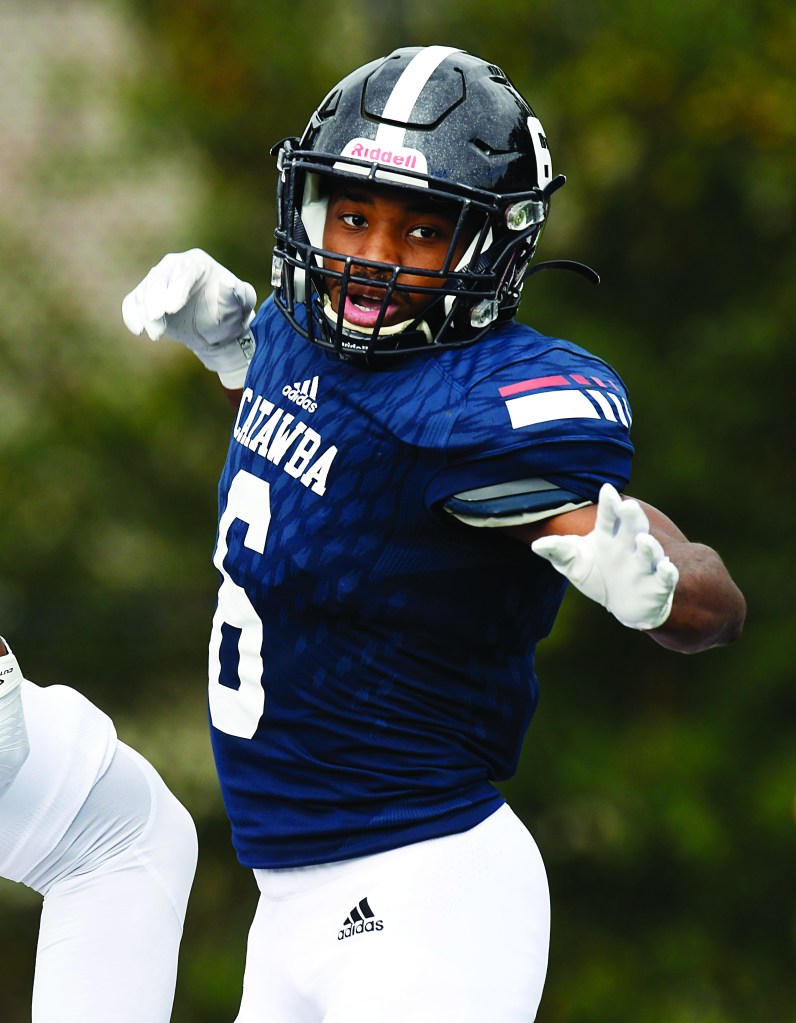 EMORY, Va. – Catawba’s football team played better after the rain finally arrived late in the first half, but the hole was too deep.

Catawba scored the last two touchdowns, including one with 31 seconds left, to make the final score respectable. Emory & Henry built leads of 21-0 and 38-10.

When it rains, it pours. Catawba’s Clayton Crile actually kicked a 36-yard field goal that would’ve gotten the Indians on the board first, but the play was blown dead prior to the kick. After a 5-yard penalty was assessed against Emory & Henry, Crile’s field goal try was blocked. That sums up how it’s been going for Catawba.

In a game moved up a day due to the anticipated impact of Hurricane Ian, Catawba (1-4, 0-3) got an early break when Emory & Henry fumbled at the Catawba goal-line and the Indians recovered the ball in the end zone.

The first score came with 9:31 left in the first half when the Wasps’ 235-pound back Grayson Overstreet, at Richmond transfer, plowed into the end zone.

The pick-six plagued Catawba again for Emory & Henry’s second score. Under pressure from a three-man rush, Catawba QB Ridge Jacobs tried to make a throw across the field, and Emory & Henry’s T.J. Payne stepped in for the interception at the Catawba 31 and had clear sailing to the end zone.

As a disastrous second quarter continued for the Indians, Emory & Henry hit a big pass play — Kyle Short to Cam Peoples for 57 yards — to extend the host’s advantage to 21-0.

Catawba got on the board with 22 seconds left in the half on Crile’s 42-yard field goal from the left hash.

Kujuan Pryor responded with another electrifying kickoff return. He’s been Catawba’s most productive player, and the speedy receiver transported the kickoff 79 yards to the Emory & Henry 4. Catawba cashed in on Pryor’s effort with a 1-yard plunge by Marquece Williams, and Crile’s PAT made it 24-10.

For a moment, Catawba had the momentum, but Emory & Henry took it right back and put the game out of reach with another rushing touchdown by Overstreet and a Short-to-Jermawn Ford touchdown pass.

Jacobs threw touchdown passes to Williams and Kobe Christian to close the scoring.

Catawba played right down to the end, recovering an onside kick after scoring with 31 seconds left.

Catawba surrendered a whopping 528 yards, as Emory & Henry dominated time of possession. Short threw for 299. Emory & Henry also racked up more than 200 on the ground, with Overstreet getting 156 on 20 carries.

Jacobs, a transfer from South Florida, finished 20-for-38 passing for 263 yards, his best day so far for the Indians, but the pick-six probably was the biggest play of the game.

Jordan Gregg made a team-high nine tackles for the Indians and was credited with a forced fumble.

Catawba goes to Wingate next Saturday, while Emory & Henry will host UVa Wise.