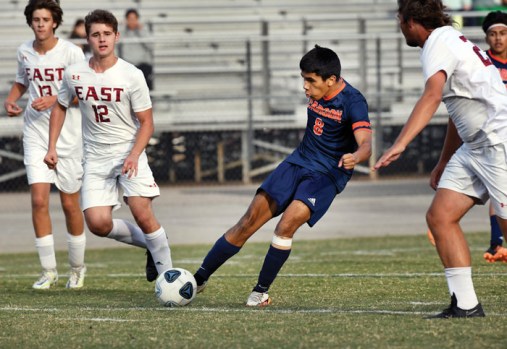 Carson's Caesar Perez-Vega (8) takes a shot at the goal in between East's Owen Kesler (12) and Nathan Taylor (23). photo by Wayne Hinshaw, for the Salbisbury Post 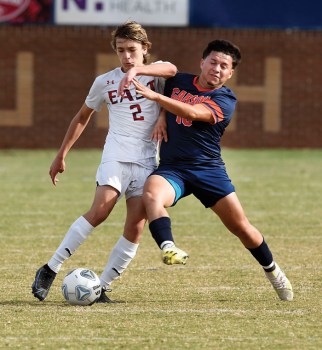 Carson's Davin Garcia (10), who had three goals Wednesday, battles East's Sawyer Riley (2) for the ball. photo by Wayne Hinshaw, for the Salisbury Post 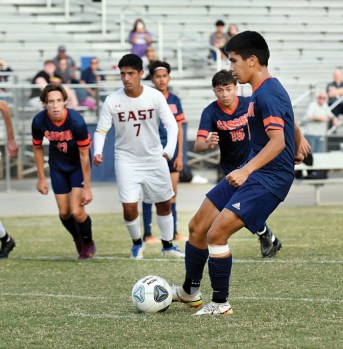 Carson's Caesar Perez-Vega gets a penalty shot and scored. He got two penalty shots like this and scored both goals. photo by Wayne Hinshaw, for the Salbisbury Post

CHINA GROVE  — Carson hasn’t been a factor in boys soccer for years, but coach Lauren West is confident the Cougars have turned the corner.

The Cougars entered this week ranked 20th by MaxPreps in 3A West. They look like a lock to return to the 3A state playoffs for the first time since 2016.

Carson built a 5-0 halftime lead and mercy-ruled East Rowan 10-1 on Wednesday to improve to 7-4 overall and 5-1 in the South Piedmont Conference.

“I did think this could be a breakthrough season for us,” West said. “We’ve been building up for a few years to be the team that we are now. Guys have gotten used to playing with each other, they are playing very well together, and we have quite a few scoring threats. We are competitive. Very competitive.”

West has seen rough times. During the bleakest days of the COVID pandemic, it was a challenge just to field a team, much less win a match. The Cougars were down to 13 boys in the program at the lowest point, but a lot has changed since then. Those 2-9-1 years are ancient history.

“Now we’ve got a deep bench and we’ve got players I can put into a game to give someone a breather without losing any intensity,” West said. “We’ve gotten a lot of compliments from good coaches and good teams about how far we’ve come. We probably should have won even more games than we have, but it takes some time to develop that mental toughness to win those tight ones.”

“Those are programs that had dominated us for years, and now we saw we can play with them,” West said. “The problem in the past has been allowing a goal and then dropping our heads and giving up another quick one. Now we don’t check out mentally. We’re staying in it.”

West said an early 11-3 romp against Statesville was a confidence-builder, a turning point. The Greyhounds had battered the Cougars annually when the teams were opponents in the North Piedmont Conference.

“We almost mercy-ruled Statesville and scored several goals after we were a man down,” West said. “It was the match where guys started to look at each other and say, ‘Hey, we can do this.'”

Leading scorer Davin Garcia had a hat trick in Wednesday’s win over East Rowan. He’s been a special talent for several years.

“Gabe Honeycutt initiates a lot of our goals — he’s a very sound, technical player who makes great decisions,” West said. “Beckham is so fast, a bolt of lightning. Gomez is scoring consistently.  We’ve got a lot of talent and while we’ve got a great senior class, we’ve also got some new faces who have made a difference.”

Central Cabarrus is winning steadily, but the team to beat in the SPC is Concord, which is ranked sixth in 3A West and is still undefeated in the SPC.

There are a lot of hurdles to clear between now and then, but when Carson goes to Concord on Oct. 17, it’s possible that the Cougars will be playing for a share of the conference title.

“When we played Concord, they were clearly a much better team than we were in the first half,” West said. “They were calm and cool and composed and we were running around in panic mode. But the second half was a different story. We scored in the first 40 seconds of the half, got the lead and had the lead for 20 minutes. Concord has a great team, but we found out we can play with them if we play together.”

“I’m excited about the future of Carson soccer,” West said. “We’ve put in a lot of work together and now we’re starting to see some rewards.”