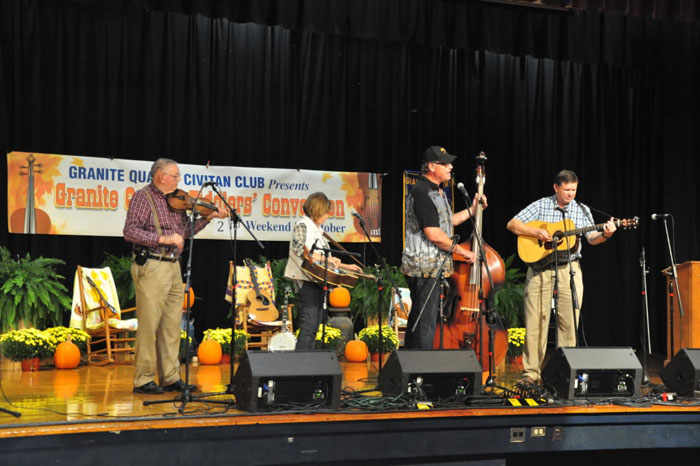 Registration will open at 4 p.m. for all categories. Youth competition begins at 4:30 p.m. All adult entries must be registered by 6 p.m. to be eligible to draw a number for performance time in a lottery style drawing. “The Grass Strings” will perform a short set at 6 p.m. followed by presentation of this year’s honoree at 6:30 p.m. Youth winners will be announced at 7 p.m. just before adult competition begins.

Each year since 1970 the club has honored individuals who have made a substantial contribution to the promotion and preservation of traditional old time and bluegrass music. This year’s honoree is Jim Fraley of Monroe. He will be honored in a special presentation at 6:30 p.m. during this year’s Granite Quarry Civitan Fiddler’s Convention. Fraley will be joined on stage with fellow members of “A Deeper Shade of Blue,” from which he retired. The band will perform a short set honoring Fraley following the presentation.

The Ralph Pennington Memorial Master Fiddler Award will be presented to the first place fiddler in the adult competition. Pennington, originally from North Wilkesboro, was a luthier of finely crafted string instruments. Although he played all the instruments, he was widely known for playing the fiddle and mandolin and won many awards on both.

The Don and Margaret Livengood Memorial Award will be presented to the Most Outstanding Youth Performer as selected by the panel of judges. The award was created by their daughter, Patti, and husband Walter Beaver in memory of Don and Margaret with Don being the last of the original three Granite Quarry Civitan members who chaired the Fiddler’s Convention Committee. The other two members of the committee were James Mathis and Junior Bost, both of whom are also deceased.

The Civitan Club will serve chopped barbecue plates, hamburgers, hotdogs and homemade desserts throughout the day and evening. Food will be available 11 a.m. until sellout.

Admission to the convention is $10. Children under 12 are free with a paid adult. The event is held on the second Saturday in October each year at East Rowan High School located at 175 St. Luke’s Church Road. 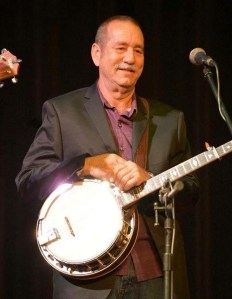 Fraley a southpaw who can really pick

Jim Fraley of Monroe loves bluegrass music and has been picking banjo most of his life. A southpaw, he began playing as a teenager.

“Actually, watching Lester Flatt and Earl Scruggs on Saturday evenings on TV was what really sparked my interest. I started playing around 1970 and actually started left-handed, but when I tried that, the fifth string was on the bottom of the neck so I just learned right-handed. At that time, I did not know they made left-handed banjos!”

To become more involved with the bluegrass community, the budding musician began attending local music events and making connections with other pickers.

“I got started going to fiddlers’ conventions and friends’ houses. (I jammed with) one man in particular, Jerry Edmondson, who at that time played (banjo) with the group, the Bluegrass Tarheels.”

“The first band I was a part of was a band called the Bluegrass Travelers. Then I performed with the Boyd Brothers and the Lincoln County Partners.”

The five-string picker made significant strides within the music industry.

For the past two decades, Fraley was banjoist with the quintet, Deeper Shade of Blue. Recording for Mountain Fever Records, the band included his oldest child, Jason, on mandolin. In 2020, Fraley stepped down from that position due to health reasons.

His son shared a little history. “What a ride! Back in late 1999, Brian Hinson called dad and asked to join forces and develop a new group. I tagged along, as I did my whole life, to the first rehearsal. Before the night was up, I was the lead guitar player. I was stoked as this was my first job in a ‘real’ bluegrass band. Unfortunately, Bobby Lasley, the mandolin player, left and I moved to mandolin, my true passion. For 20 years we traveled the roads together. We have been privileged to share the stage with heroes we both admire.

“Due to this pandemic, Dad was not able to play his last few shows with us. The whole situation has been strange, but that’s the cards we were dealt. We know that things eventually come to an end. Like many other bluegrass powerhouses, you must eventually rest. Steve (Wilson, Fraley’s replacement) knows the shoes are big that he is filling and has been patient, respectful, and willing to compromise as we transition.”

Guitarist and lead singer, Troy Pope, expressed, “Among being one of the finest banjo players on this earth, you can’t overlook his baritone singing. He knew that part like no other and was a huge part in the band’s signature harmony. Standing beside Jim on stage for close to 20 years, we made many, many memories and I have enjoyed every bit of it.”

Frank Poindexter, DSOB’s dobro player, praised his former band mate. “Jimmy is one of the smoothest and most accurate five string banjo players I’ve had the pleasure of working with! And anybody that knows Jimmy will attest of his love for the music and his brother-hood relationship with all the people.”

“I have known Jimmy for many years now and I have been a fan of his playing as long as I’ve known him. So when I was presented the opportunity to come on board with Deeper Shade of Blue, I immediately said yes and Jimmy was one of the main reasons. I have had the pleasure of standing on stage with him for over five years and it’s been an experience I wouldn’t trade for anything. Jimmy’s timing, tone, and drive are among the best I have ever heard and he will forever be one of my favorite banjo players. I also will never forget the memories we have made traveling the roads together. They produced some really good ‘Jimmy’ stories,” added bassist, Scott Burgess.

Professional banjo player, Sammy Shelor of the Lonesome River Band and recipient of the Steve Martin Banjo Prize, praised his pickin’ pal. “Jim Fraley is one of a long line of the great banjo players to come out of Western North Carolina. As tasteful and melody driven as you will ever hear, he always knows what to play and when! He has been a dear friend and hero of mine for many years.

Former NC Bluegrass Association president, Vivian Hopkins, interjected. “From the time I met Jimmy Fraley over 40 years ago, I was impressed with his banjo playing. He had his own style developed by the influence of the banjo masters. Throughout his career, he has been quick to offer advice and help young aspiring musicians reach their goals in music. He has always given a masterful and professional performance in every band he’s fronted or played in.”

Joan, Fraley’s wife, has been by his side, supporting him for over 40 years.

“The first time I saw Jimmy he was playing a festival that my Daddy put on and he was literally just standing out in the field by himself picking his banjo.”

“The next time I saw him, he was playing with the Bluegrass Travelers at the Sandhill Opry (her father’s music venue). We didn’t talk there, but we both kept eyeing each other. Then I saw him at a festival in Cheraw, South Carolina. We kind of got together that night and have been together ever since. When I went back to work the next Monday, I told the people I worked with that I would be married within 6 months.

“Well, it ended up being about a year. Before we got married, he told me that he would always be picking his banjo somewhere and that I was welcome to go with him or stay home if I’d rather. The first thing packed in our car on our honeymoon was his banjo!

“I have always gone with him, dragging the kids along with us. I’ve been very proud to be classified as ‘the banjo picker’s wife’. After 20 years with Deeper Shade, it saddened me to see him quit playing. His health just doesn’t allow him to travel the long distance and he doesn’t want to keep playing since he’s not able to play to the best of his abilities.”

Picking for more than four decades, Fraley isn’t about to close his case forever.

“I still plan to play and fill-in with other bands when needed. I am planning to jam all I can,” Fraley vowed.