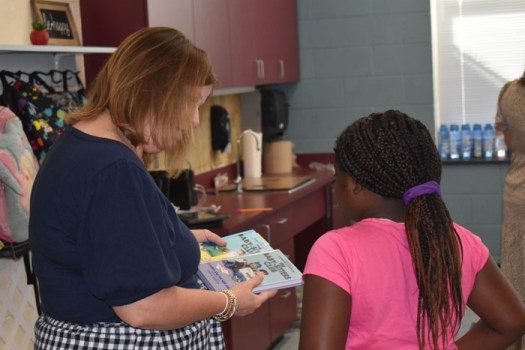 In one of the last classes Rowan-Salisbury Schools Superintendent Dr. Kelly Withers visited, she was thrilled when a student told her she was reading "The Babysitter's Club," then went to get the book to show her where her bookmark is. "That kind of excitement is fantastic, and she was so proud of the effort she had made. I'm glad she wanted to share it." Elisabeth Strillacci/Salisbury Post 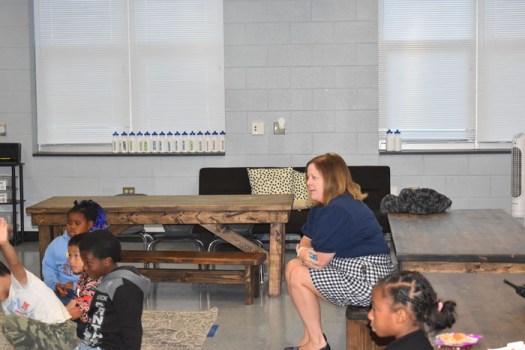 Rowan-Salisbury Schools Superintendent Dr. Kelly Withers entered one of the first classrooms and immediately made herself at home with the students, paying attention to the teacher along with them. "This is the energy, this is what it's all about," she said. Elisabeth Strillacci/Salisbury Post 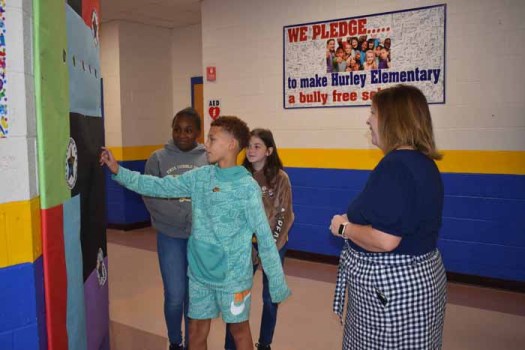 Fifth graders Jordan, from left, and Sam, behind, listen as Jalen explains the five houses of Hurley Elementary School to newly sworn-in Rowan-Salisbury Schools Superintendent Dr. Kelly Withers on Tuesday morning. When she asked him which house is best, he answered, "All of them. Five houses, one family." Elisabeth Strillacci/Salisbury Post

SALISBURY — Dr. Kelly Withers, newly selected school superintendent, was sworn in to her new role Monday afternoon at the Rowan-Salisbury Schools Board of Education meeting, and for Withers, it was a wonderful homecoming.

“There is an urgency with which we will do our work,” she told board members and the family and friends in attendance. “There is no time to sit around and wait. There is much work to be done and we intend to get busy.”

And get busy she did. Tuesday morning just after 7:30 a.m., Withers arrived at Hurley Elementary School to kick off a whirlwind tour of every school in the district between now and Oct. 13, the start of a teacher workday break.

Withers toured the school with Jennifer Brown, principal and former co-worker who was thrilled that Withers began her tour at Hurley.

“I think her appointment is a very good thing for us,” said Brown, who spent time updating Withers on the school’s approaches during the tour.

Withers noted that a new state mandate requiring teachers to be trained in LETRS, a program that “will change the way we teach reading and make it much more successful,” is “a challenge to work through, because we are trying to find time for the teachers to get the required professional development while still teaching class and working with students. It’s a matter of morale, keeping it up.”

Withers added that her first priority will be “stabilizing the district. We have quite a few vacancies that we need to fill, but we need to pursue talent so we get the best of the best in front of our students.”

Withers had more than 21 years with the RSS district before leaving to take a job as deputy superintendent of Cabarrus County Schools in late 2021.

She started her career as a science teacher at West Rowan High School, and after her swearing in, made sure to thank Henry Kluttz, who first hired her as a teacher.

“I so appreciate all the wisdom he poured into me,” she said.

In 2020, she was promoted to associate superintendent under Lynn Moody days before schools were ordered to close that March due to the COVID-19 pandemic.

Two students at Hurley who were chosen to ask Withers any question they wanted were delighted to find her favorite color is Carolina blue, and her favorite sport and sports teams are “any Carolina Tar Heel teams.” A UNC Chapel Hill graduate, Withers made it clear she’s a Carolina girl through and through.