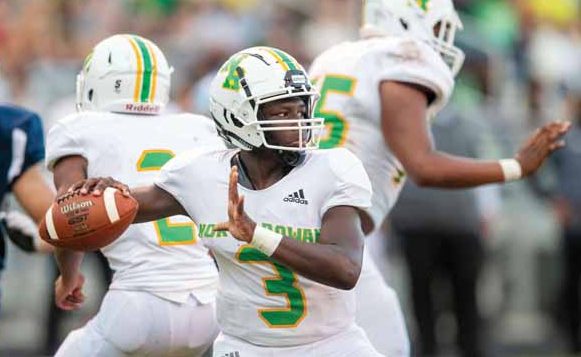 The Cavs’ post-season aspirations took a costly hit when visiting Thomasville rushed for 388 yards and seven touchdowns in a consequential 45-13 CCC victory.

“I just told them the scoreboard is off,” interim head coach Marcus Hamilton said after North (4-2, 1-1) squandered a chance to climb the conference leaderboard. “We’ve got to get this behind us. We’ve still got several goals at hand. I told them all to go home, look at themselves and get back to work on Monday.”

Indeed, it was an outing North would like to control-alt-delete from memory. The Cavs were no match for the beefy Bulldogs (4-1, 1-1), falling behind 19-7 by halftime and then yielding touchdowns on three consecutive fourth-quarter possessions. North’s offense, meanwhile, spent the night on the frozen food aisle, collecting only 39 yards rushing in its worst performance of the season.

“Well, they have a really good inside defense,” said record-setting North receiver Amari McArthur. “Big guys who are fast and get out and tackle. And their D-lineman were always firing off the ball.”

That spelled trouble for North. An evening that began with high hopes spiraled into despair when the guests marched 57 yards in four plays and made their fourth end zone appearance early in the third quarter. It was 25-7 after THS quarterback Janhri Luckey scampered 22 yards for a back-breaking score.

“I like where we are,” said winning coach Kevin Gillespie. “Last week was a tough loss (35-12 to Salisbury), but it didn’t make-or-break our season. This game right here doesn’t make our season because we won. We’ve got to just keep playing them one at a time and get better.”

The Bulldogs were at their best in the final stanza. Running back Shamon Smith (146 yards on 23 carries) scored on a couple of short runs and freshman teammate Darrenique Moore closed the scoring when he took a handoff from backup QB Charles Norman and dashed 7 yards for a game-sealing TD with 1:57 to play.

“It’s just the little things that are holding us back right now,” said Hamilton, a late replacement for under-the-weather Nygel Pearson. “But they’re all fixable. We have to be able to stay strong and keep pushing.”

Thomasville finished with 400 yards total offense and boasted two 100-yard runners. Smith, a burly handful, plowed his way for 126 yards in the second half. Teammate Kevin Robinson — a shifty-yet-grounded back — gained 136 yards on 15 first-half carries and reached pay-dirt twice. He rolled an ankle on a failed two-point conversion attempt with 18.9 seconds remaining in the second quarter.

Two-way lineman Yasir Wactor said there was more to it than that. “We should have wrapped up better,” he confided. “It was very frustrating.”

There were at least a few bright spots for North. Quarterback Jeremiah Alford continued his top-notch season by passing for 153 yards and two touchdowns. His 33-yard completion to McArthur tied the score 7-7 early in the second quarter and his 13-yard TD strike to Emanuel Cantres drew the Cavs within 25-13 in the third period.

Then there was McArthur — the senior wideout with the gift of grab — who needed 12 yards to become the first Cavalier ever to post 2,000 receiving yards.

He finished with seven catches for 102 yards.

“The offense got moving in the second half and I liked the way our defense kept fighting,” Hamilton, North’s defensive coordinator, said afterward. “Even though we knew (Thomasville) was going to keep running it right at us, they fought until the end. But we know we’re gonna have nights like this, when things don’t go our way. That’s why we’re going back to practice, we’re gonna look at film and try to find some positives in all this.”

NOTES: The night’s most glaring statistic belonged to North running back Jaemias Morrow: nine carries for minus-6 yards. He arrived with 712 yards rushing and 12 touchdowns. … The Cavs finished with 192 total yards. … Khalil Davis recovered a fumble for North, which entered the game ranked as high as fifth in 1A state polls. … Luckey ran for 66 yards and passed for 12 before suffering an injury with 4:59 remaining in the the third quarter. He gave the Bulldogs the lead for good with an 8-yard TD run in the second quarter. …THS took 53 snaps in North territory and 17 from its own side of the 50. … There was a brief halftime tribute to twin brothers James and John Woodson. The 2013 North graduates were killed in an auto accident last week. … North celebrates homecoming on Friday when East Davidson visits.