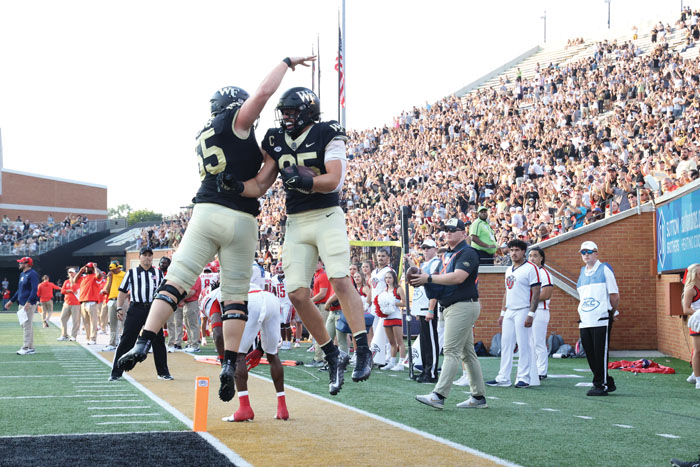 Wake Forest’s Blake Whiteheart (85) celebrates a touchdown with a teammate and hopes to be doing more of the same against Clemson — Winston-Salem, NC – Sep 17: NCAA Football - Liberty at Wake Forest at Truist Field in Winston-Salem on September 17, 2022. (Credit: Andy Mead/YCJ)

The 21st-ranked Demon Deacons now have another shot at something they haven’t
done: beating No. 5 Clemson. The teams meet Saturday, and the Demon Deacons are looking to end a 13-year losing streak in the series.

“The bottom line is we haven’t played well against them,” Clawson said. “So I just want to go out Saturday and I want our team to play at the level that we’re capable of.”

“They’re the Atlantic Division champs,” Clemson coach Dabo Swinney said. “And they know what that looks like it and they’re confident in that.”

But even last season, with Wake Forest winning 11 games and cracking the top 10 of the AP Top 25 poll, t he Tigers beat the Demon Deacons 48-27 at home in November. In fact, the Demon Deacons have lost by at least 14 points in all but one matchup, with the Tigers since last winning in 2008.

And this starts a critical two-game division stretch for the Tigers, who host No. 12 North Carolina State next week.

The Demon Deacons needed to go to the final minute to hold off Liberty 37-36 last weekend at home. Afterward, Clawson sensed his team was so down by the close call that it needed a pick-me-up.

“I told these guys Sunday: We won the game,” Clawson said, adding: “We’re not going to walk around here with our head down all depressed after we win. Let’s fix the mistakes, know what we didn’t do well — but we won.”

Clemson starting defensive end K.J. Henry spent his youth rooting for Wake Forest, where his father, Keith, was a longtime assistant under Jim Grobe. And the Winston-Salem-born Henry doesn’t let Swinney forget that it was a loss to Wake Forest in 2008 that led to the ouster of Tommy Bowden and Swinney getting the interim job.

“If my dad doesn’t beat him, he doesn’t get this job,” Henry joked.

Saturday’s quarterback matchup pairs Wake Forest’s Sam Hartman and Clemson’s D.J. Uiagalelei. Hartman, who missed the opener while being treated for a blood clot, helped the Demon Deacons boast one of the nation’s top-scoring and most efficient offenses last season. He has thrown for seven touchdowns and two interceptions in his two appearances this year.

“They’re an RPO team and he knows how to read it and he’s very patient with his reads,” Clemson defensive co-coordinator Mickey Conn said. “So we’ve got to be patient with him.”

After a bumpy first season as the starter last year, Uiagalelei has thrown for five touchdowns with one interception.

The Tigers are starting a two-week stretch that could allow them to take control of the league’s Atlantic Division race, starting with a trip to face the reigning division champion Demon Deacons. Clemson  hosts No. 12 North Carolina State next week.

Line: Clemson by 81/2, according to FanDuel Sportsbook.

“We definitely executed together a lot more often, but we’re still not quite where we want to be yet,” Notre Dame center Zeke Correll said, critiquing last weekend’s 24-17 victory over California. “We’re still focused on building off of each performance and improving.”

The win finally provided some glimmers of hope after the struggles that led to back-to-back losses to start the season and were compounded when starting quarterback Tyler Buchner suffered a season-ending shoulder injury.

But the Irish (1-2) still find themselves in potentially troubled waters. A loss Saturday would give Notre Dame its first 1-3 start since a 4-8 finish in 2016 with No. 19 BYU, No. 5 Clemson and No. 7 Southern California to come.

North Carolina, meanwhile, has been outscoring opponents from the Group of Five or the Football Championship Subdivision while their defense has struggled mightily. It ranks No. 123 in total yards allowed (486.3) and 119th in scoring defense (37.7).

For Notre Dame, which rushed for a season-best 147 yards against Cal, squaring off against a run defense that allows 193 yards per game offers a chance to control the clock and limit possessions. The Tar Heels allowed Appalachian State to score 40 points — in the fourth quarter — in a two-point victory (63-61).

No surprise that North Carolina defensive coordinator Gene Chizik spent last week’s bye seeking solutions. “I think the communication has gotten better,” Chizik said. “I think to get a breather and go back and look at when you were playing poorly and why, and you put it all together and not just look at a single event or a single game, I think it’s pretty glaring. I feel really good in terms of the players seeing what we need to do a better job of collectively.”

North Carolina is looking for its first 4-0 start in 25 years. UNC wide receiver Josh Downs has missed the past two games due to injury but was practicing and could return against the Irish.

Line: North Carolina by 11/2, according to FanDuel Sportsbook.

RALEIGH (AP) — North Carolina State’s defense is coming off its best performance of the season entering Saturday’s game against Connecticut. Getting more consistency out of the offense would help the 12th-ranked Wolfpack, too.

That unit sputtered after halftime i n Week 1 of an escape at East Carolina, then had issues with completing drives and avoiding score-negating mistakes last weekend against Texas Tech. It hasn’t kept the Wolfpack (3-0) from remaining unbeaten, but things must get a bit smoother with No. 5 Clemson looming next week in the Atlantic Coast Conference opener.

Despite the presence of preseason ACC player of the year Devin Leary at quarterback, N.C. State ranks eighth among league teams in scoring (34.3) and 11th in total offense (384.0).

In the 27-14 win against the Red Raiders, the Wolfpack had a defensive touchdown while having offensive TDs wiped out by both a penalty and a goal-line turnover.

The Huskies (1-3) have been outscored 107-14 in consecutive blowout losses to Syracuse and No. 4 Michigan. Last weekend’s 59-0 loss to the Wolverines is the program’s worst in more than 100 years.

The Huskies also won’t have top tailback Nate Carter after he suffered a shoulder injury in the first half of the Michigan loss.

Duke heads to Kansas in matchup of 3-0 teams

Duke and Kansas will try to extend their perfect starts another week when the two traditional basketball powers meet on the gridiron Saturday in Lawrence.

The Blue Devils are 3-0 under Mike Elko. The Jayhawks have won their first three games to begin Lance Leipold’s second year in charge. Both teams have featured high-octane offenses.

The Blue Devils are going for their first 4-0 start since 2018, when New York Giants quarterback Daniel Jones was under center and they last went to a bowl game. The Jayhawks are shooting for a perfect start for the first time since 2009, the year after their last winning season. It is one of four games involving unbeaten FBS teams this weekend.

Elko took over the Blue Devils this season after several high-profile stops as a defensive coordinator.

Line: Kansas by 71/2, according to FanDuel Sportsbook.

South Carolina hopes to get itself back on positive footing when it faces Charlotte of Conference USA at home on Saturday night.

The Gamecocks dropped their first two Southeastern Conference games to No. 10 Arkansas and No. 1 Georgia by a combined score of 92-37. The offense is ranked No. 100 nationally and the defense ranked No. 113.

Charlotte will look to beat its first SEC opponent in three tries. The 49ers are 1-7 overall against Power Five programs after a win at Duke last season. Its the first meeting of the two teams.

Charlotte QB Chris Reynolds had his sixth game-winning drive of his career last week in the 42-41 win at Georgia State.

Line: South Carolina by 221/2, according to FanDuel Sportsbook.