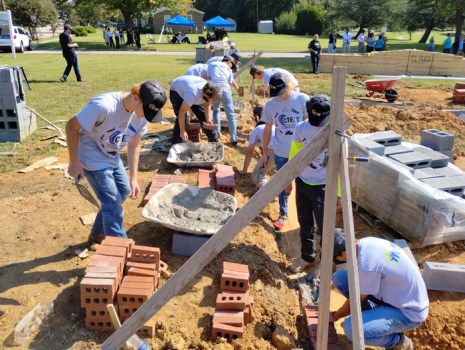 Masonry students start a new side to a home’s foundation. Mark Wineka/For the Salisbury Post 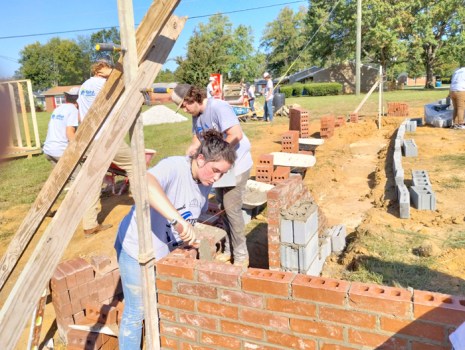 Isabella Summerall and O’Connor Leonard work on the foundation for a house. Mark Wineka/For the Salisbury Post 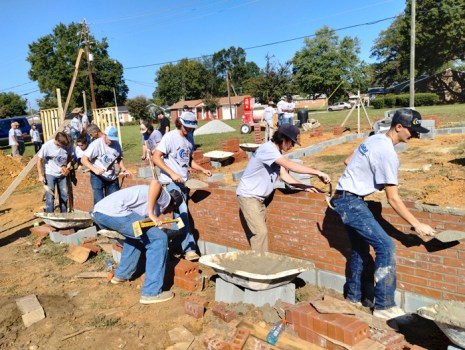 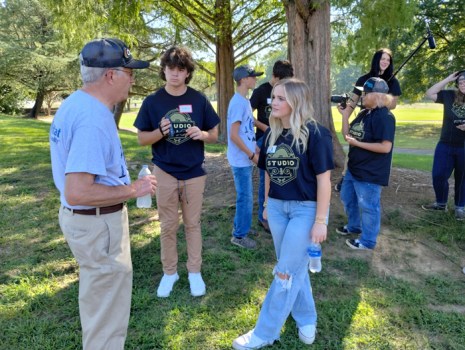 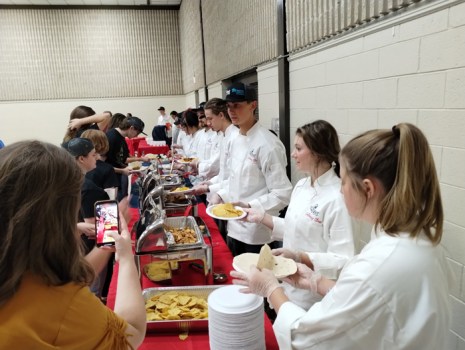 At the Civic Center, the East Rowan High Culinary Class prepared the lunch for everyone working or visiting the new Habitat home sites, which were about a block away. Mark Wineka/For the Salisbury Post 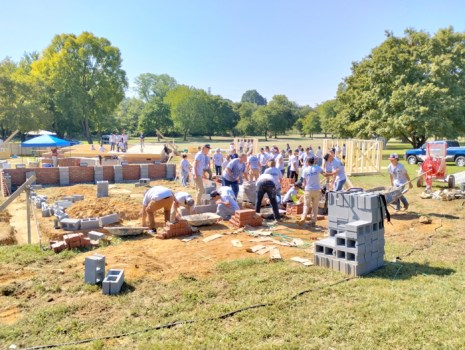 More than 100 CTE (career and technical education) students were on the Habitat home sites off East Monroe Street or working at the Salisbury Civic Center during Tuesday’s event. Students have worked on 13 Habitat houses since 2019. Mark Wineka/For the Salisbury Post

SALISBURY — About a block away, you could hear the hammers. A bit closer, your ears caught the whirring sound of a mixer making mortar or the slapping ping of trowels against bricks.

Behind both houses, carpentry students measured, cut and erected the framing for storage buildings. Across the street, under a tent, health services students manned a first-aid station and offered free blood-pressure checks for visitors dropping by to see all the action.

Meanwhile, students from a South Rowan marketing and broadcasting class combed the worksites with their cameras and microphones to conduct interviews. Close by, at the Salisbury Civic Center, the East Rowan High Culinary Class worked steadily to prepare and serve a luncheon for all the workers and guests.

Most of the day’s participants wore T-shirts, many of which were designed and printed by a Salisbury High entrepreneurship class.

Tuesday’s flurry of activity belonged to “Building a Strong Partnership” — an event highlighting the collaboration between the CTE (career and technical education) students of Rowan-Salisbury Schools and Habitat for Humanity of Rowan County.

Since its inception in 2019 — and even through the COVID-19 pandemic — trade and industry students from RSS have assisted in the building of 13 Habitat for Humanity houses. The two houses under construction on East Monroe Street will push that number to 15.

To both Habitat and school representatives, the benefits are obvious. Above all, the Habitat homes offer off-campus classrooms in disciplines such as masonry, general carpentry and cabinet-making.

“This gives our students real-world experience,” said Darren Yow, masonry instructor at South Rowan High. “I think they learn so much more here. The experience they get is just incredible.”

Working on a site also allows a student to determine whether this kind of work is for him or her, Yow said. He contended that those who hang with it develop a sense of pride in every house.

“They say, “I did that, I did that,” Yow said. “I have kids all the time asking, when are we going to Habitat?”

Teamwork and a cross-pollination among schools becomes embedded in each Habitat project, as Tuesday’s event tried to illustrate. In addition, the program is continuous, like a sports team, even though there are new students every year.

A great benefit also is, of course, the building of a home for a lower-income family.

“As you can see,” Rowan Habitat board president Jeff Wetmore said, “we are partnering with Rowan-Salisbury Schools’ CTE program to build affordable housing for our community. This is our future at work. High school students learning trade skills.

“We are very fortunate at Habitat for Humanity of Rowan to partner with the school system. Not only does it benefit the students, but we are helping families in need of housing.”

The CTE program provides the student workforce, transportation to and from the project, on-site teacher supervision, tools as needed and all the appropriate student forms and documentation.

“The best news about the partnership is that it doesn’t require much to enact it,” Emerson told visitors Tuesday who might have been seeing or hearing about the collaboration for the first time. “Basically, the schools and Habitat keep on doing exactly what they are skilled at doing.

“… You get in a room. You coordinate it, and great things happen. Next thing you know, you have created something good and enriching for each party and the community at large. It truly is low-hanging fruit.”

Ashton White, a 2017 West Rowan High graduate, went on to become a two-time national masonry champion — the first woman to accomplish the feat. She recently graduated from the University of North Carolina at Charlotte in construction management.

White donned her work clothes and helped the high school masonry students Tuesday in building one of the foundations. Later, she told the lunch crowd at the Civic Center she hopes to own a masonry company some day. She credited her start in masonry to the West Rowan program under the guidance of Rodney Harrington.

“Masonry, or any other of the trades, are not just for boys,” White said. “I’m living proof of that. … It’s now my career path.”

A 2022 West Rowan graduate, Rosty Menius is now enrolled in construction at Rowan-Cabarrus Community College. He took both carpentry and masonry classes in high school and credits the CTE program and working on Habitat homes for the inspiration to get into the construction field.

Students on site Tuesday said they enjoy spending a school day away from their campuses and seeing some of their work go into the houses.

“I get to swing a hammer, and I get to get out of school,” added Evan Butler of South’s woodworking class.

“The Studio,” a CTE marketing and broadcasting class at South, brought almost 20 students to the site. Their real-life assignment, under a two-week deadline, is to put together a video Rowan Habitat can use for the marketing and promotion of its partnership with Rowan-Salisbury Schools.

“I like interviewing people, talking to people,” said Ella Carden, part of the broadcasting class. It really has expanded my people skills.”

Emerson offered help to other Habitat programs that might like to get started with partnerships in their counties. He said besides Rowan Habitat, similar programs are underway or getting started in Alexander, Chatham and Guilford counties. He hopes the partnership here can serve as a model in the state and nationwide.

A note: Habitat for Humanity of Rowan continues to build houses with the help of others in the community, such as churches, civic clubs, businesses and other organizations.

To date, Habitat has erected 143 homes in Rowan County, and the two on East Monroe Street represent Nos. 144 and 145. A Habitat home is also under construction in Landis.

The school system’s CTE program is a success in itself. Kathy M. Sanborn, interim CTE director for Rowan-Salisbury Schools, said the graduation rate for students enrolled in two or more CTE classes is 97 percent, and 4,199 students systemwide are enrolled in CTE classes this year.

RSS’s CTE programs offer credentials in 62 different areas, from nursing to construction. Sanborn said 4,166 credentials have been earned by students, who routinely are among state and national winners and finalists in various competitions.

Emerson counted at least eight different Habitat affiliations from other areas that dropped by the worksites Tuesday to see the students in action. Several business and government officials also swung by.

Students worked roughly from 9:30 a.m to 2:30 p.m. with the Civic Center lunch in between.

Several Rowan Habitat volunteers and board members were on hand, helping the kids on their various tasks.

George said 70 students were on the construction crews, not counting students in the broadcasting, culinary and health sciences fields. The event organizers planned on 110 to 120 students in all.

“This could be the beginning of an annual event,” Sanborn said last week.

The program gives kids a chance to reach out beyond themselves, she added, describing it in terms of local mission work. It’s connected to what they’re learning, plus it’s helping the community, she said.