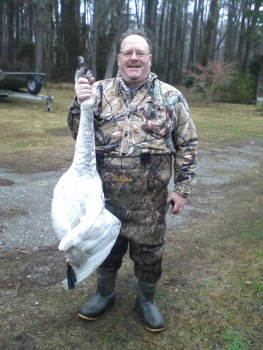 At least something went right on the hunting trip… submitted photo 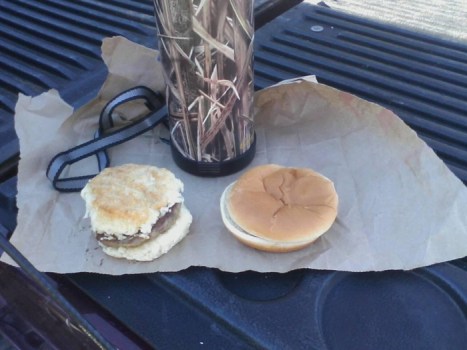 Depressed by the general scarcity of local ducks, my hunting buddy and I had talked for years about a guided hunt down on the North Carolina coast. He had shown me pictures of himself as a teenager there hefting a fine strap of redheads and grinning widely, so I was definitely “all in.” When we finally overcame inertia and made some calls, we managed to reserve a popular guide with impoundments at legendary Lake Mattamuskeet, but he was only available on Saturday, the last day of the season. Little did we know the potential damage to our arteries and psyches that lay in store…

Late January travel plans are subject to vagaries including ice storms, so of course we overcame the odds against same and had to set out on sheet ice. We should have known when the Ram was sliding around leaving my buddy’s neighborhood that it was going to be a long afternoon. Since it was 11 and we hadn’t had lunch, we drove through Wendy’s and grabbed a couple of burgers. The ramp onto the interstate was slick, but we reasoned that the highway itself would be much better with constant traffic cutting the ice and the brine trucks already on the job.

Well, not exactly…The road grew more and more treacherous as sleet continued to fall, and the combination of schools, state offices, and private businesses letting people out early for a winter storm advisory plus normal Friday afternoon traffic completely choked the peripheral loop around Raleigh and eventually turned a five-hour trip into an nine-hour trip. We had to stop every half hour to chip ice off the wiper blade arms and headlights as it grew colder and colder and the sleet and frozen rain intensified. We stopped counting the number of vehicles we saw overturned, wrapped around trees, or otherwise disabled on the shoulders of the roads along the way. We were deeply impressed by a big tanker rig perfectly jackknifed so as to completely block a bridge and back the traffic up for miles on a four-lane state highway, fortunately on the opposite side. At least a good hot dinner of fried chicken with sweet potato pie awaited us when we got to Hyde County!

Or so we thought…A call ahead to the (by all reports) one good restaurant there revealed that the whole joint was reserved that evening for—sadly ironic—the local DU banquet, so we pulled into a Burger King in Washington to get a couple of burgers.

We were to meet our guides at 4 am at the Gas Bar, the only establishment open for miles around. We got some coffee and several sausage biscuits apiece and headed out for the hunt. Naturally, the ice storm we had weathered had also iced in all the impoundments, so in an area that is home to possibly a million waterfowl, we saw perhaps two in the air, both call-resistant. Concluding after a couple of hours that to stay longer would be fruitless, we pulled out and went to a nearby field to fill a swan tag. At least that went well. We were for some reason (perhaps the presence of several small tables with napkin holders) under the impression that the Gas Bar served some hot lunch plates or at least deli sandwiches, but when we returned we discovered that the menu involved only permutations of sausage, ham, and /or bacon on biscuits or buns. Fine—we went for ham biscuits this time and stocked a couple of extras to get us through the afternoon hunt.

After a little nap in the truck and a drive through the National Wildlife Refuge—I am sure I will never see that many ducks, geese, and swans in one place ever again!—we met the guide for the afternoon hunt. Since the impoundments had thawed, we did have some good action right at dusk, bagging some woodies (including a perfect drake that now graces my friend’s den) and a couple of shovelers. The flight seemed to be improving at legal sunset, but our guide was quick to remind us that shooting late on the last day of the season would also be interpreted as hunting out of season—an additional felony– by the Federal wardens, so we jacked the shells out of our autos extra fast and I think even a few minutes early!

We took off our waders, loaded up, and headed for home five hours west. Thankfully, the skies were now clear and the roads dry. ETA was 11 pm, but only if we didn’t tarry in “sit-down” restaurants, so three guesses what we had for dinner? Oddly, the next day I was really craving a salad…