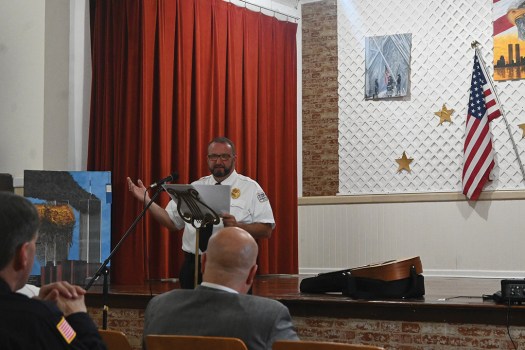 Madeline Wagoner/Salisbury Post — Rowan County Emergency Services Chief Allen Cress shares his story as a first responder and the importance of honoring those who have fought for America's freedom. 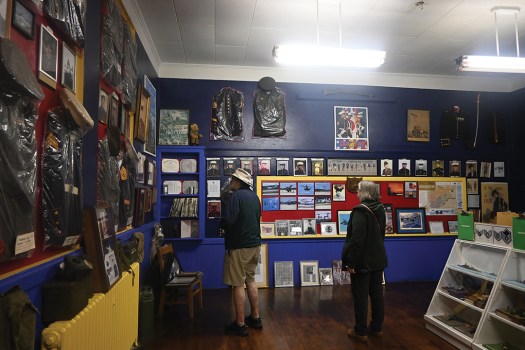 CHINA GROVE — The Price of Freedom Museum, serving as a memorial for those who have fallen for freedom, opened its doors Saturday morning for a day of remembrance of lives lost in the Sept. 11, 2001, terrorist attack.

The free tour of the museum began with an opening ceremony in the auditorium. After a pledge to the American flag and a musical break of “When Those Sirens are Gone” by Kevin Davison, public safety workers offered a prayer by each department.

Sally Rogers, a paramedic, spoke of protecting the lives of emergency service responders as they perform their duty to save a life. Trooper Ned Moultrie asked the Lord on behalf of police officers to provide the workers with courage and strength of their physical bodies and spirit to keep the community safe. The last prayer was spoken by Jim Fulton of the Locke Fire Department, asking for strength and keen attention to cries for help from any individual of any age.

Rowan County Emergency Services Chief Allen Cress took the podium to share his story of a first responder’s life after 9/11.

“On that day, the lives of public responders changed forever,” he said.

His career began in 1982 as a firefighter at Rockwell Rural Fire Department before becoming the chief in 1994, where he also became a 911 communicator. On Sept. 11, 2001, he was participating in a fire prevention program at Rockwell Elementary School. The assistance chief was on the phone before walking over to Cress and informing him about what happened.

“I cried not only for those that were killed, but angry tears that this could happen to our country,” he continued. “How dare someone tread on America’s soil and do this to us.”

Cress would go on to say that nothing fills him more with pride, other than his children and grandchildren, then being a first responder. The focus was then put on the lives of military personnel. According to the chief, what the local responders do fails in comparison to the dangers of those fighting for the country. He said, “We should remember them and hold them in great regard.”

Pastor Joey Spry of Fisher Street Baptist Church in Concord, a previous firefighter at Locke Fire Department and current N.C. State Highway Patrol communications officer, encouraged attendees to “lift those up who are mourning this weekend.” He said the Price of Freedom Museum holds a close, personal connection with him as his father was a survivor of Pearl Harbor. His father never talked about the experiences he saw on that day, Spry said.

The ceremony closed with a moment of silence and the ringing of a bell to remember the signal of the end of the World Trade Center fire and the completion of emergency personnel duties.

The day continued with music from the Furr Family and tours of the museum, rooms filled with historical artifacts and photos of those who have served to protect the freedom of the United States.