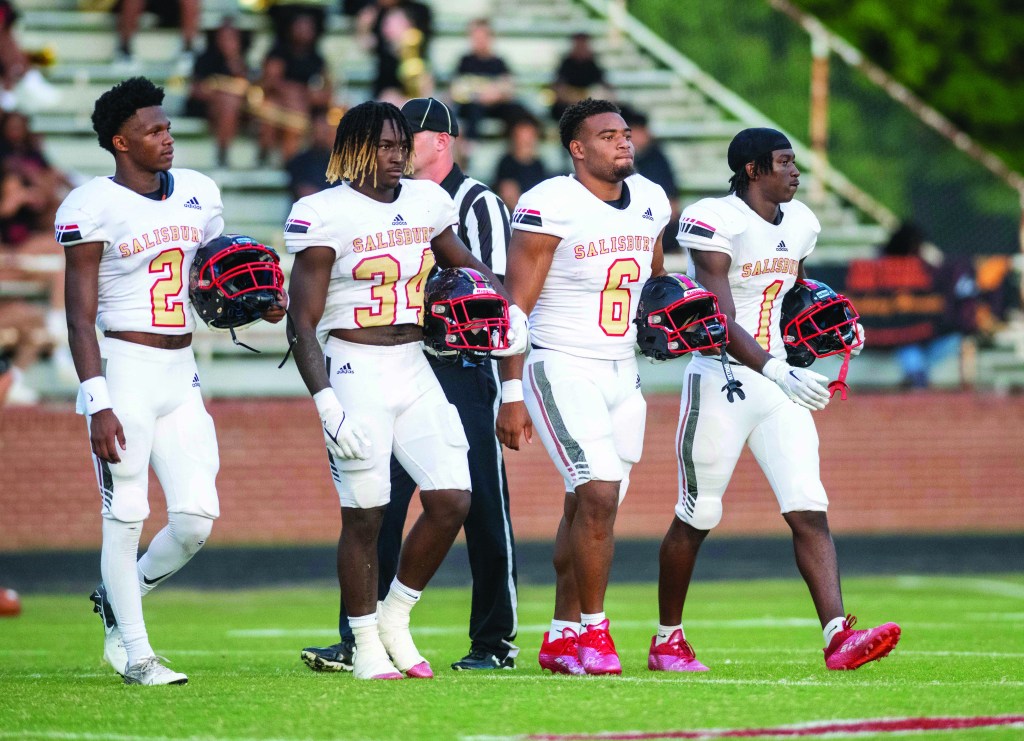 LANDIS — Salisbury’s supporting cast was asked to spend another night in the spotlight.

Last week it was Jumal Rule, who filled in admirably when running back JyMikaah Wells rolled his left ankle on the third play from scrimmage at East Rowan. Yet the Hornets didn’t consider it an adverse situation, handed the ball to Rule 21 times and won by four touchdowns.

Four regulars — including Wells, who was held out as a precaution — were sidelined for the Hornets’ 41-0 rout of host South Rowan on Friday. Salisbury (3-1) leaned heavily on Rule, who jitterbugged his way for 226 yards on 16 carries and two touchdowns. Teammate Mike Geter was again spot-on at quarterback, completing eight of 10 passes for 154 yards and three scores. He ran for an additional 91 as SHS racked up 571 yards total offense and easily secured its third straight win.

“We’ve gotten better every week and finally put everything together,” first-year coach Clayton Trivett said. “We’ve still got some mistakes to fix, but overall, I’m happy about it.”

Salisbury gained 388 yards on the ground, skating behind an offensive line that won nearly all of its trench battles. Anchored by center Bryan Rosado, it included Josh Burns, Jeremiah Blackson, Antonio Young and newcomer George Ellis, the defensive end-turned-right guard who switched from uniform No. 40 to 65 just before gametime.

“It was the first time George ever played on the offensive line,” Trivett said. “He didn’t know he was playing there until the pre-game meal. Then he went out and did everything we asked.”

Salisbury used two plug-ins on defense as well. Amara Johnson handled Wells’ duties at DB while DJ Adams played as a down lineman and recovered a fourth-quarter fumble. They helped muzzle the Raiders (1-3), limiting them to 144 total yards and 10 first downs. South went 2-for-13 on third-down conversion attempts.

“We watched films of South, figured out what they like to do and just played football,” said Salisbury DT Anthony Dodd. “They did a lot of pulling, which we adjusted to in the second half. The thing is, we never got over-confident because you never know what the other guy’s got.”

Despite suffering its third consecutive shutout, South continues to take baby steps in the right direction. While it had no answer for Rule or Geter, the Raiders received positive performances from senior Bronson Hunt (70 yards rushing) and defenders Conner Richards and Justin Deaton (fumble recoveries). But South was already leaking oil in the opening quarter when it was flagged three times and lost a fumble. Salisbury exchanged the gifts for its first two touchdowns — Rule’s 9-yard burst into the end zone and a 25-yard Geter-to-Deuce Walker TD pass.

“We had some good opportunities early in the game,” said South coach Chris Walsh. “We put something together and worked on it, thought we could make something happen. Those early penalties were drive-killers. That’s hard to recover from.”

Geter propelled the Hornets to a 27-0 halftime lead. He scored on a 2-yard run with 3:01 remaining in the second quarter, then tossed a magnificent 40-yard touchdown pass to Nature Smith with 1:59 on the clock. Geter threaded a pinpoint pass between two defenders and hit Smith right on the gloves. In the third quarter Smith made his second TD catch on a 16-yard pass — an improvised, just-get-open play after Geter had been flushed from the pocket.

Afterward, Geter indicated Salisbury had stuck to its game plan by sprinkling a few passes around the field and running with abandon. And he was quick to acknowledge Rule’s almost-effortless running style.

“I think he played very well,” the QB said, “but I expected him to do this. He has shown he’s a natural born athlete.”

Rule, for his part, is thankful for the opportunity to play and contribute. “I’m an elusive runner,” he noted. “But if I need to drop my shoulder, I’m good. I can do that and so can JyMikaah. He’s our leading rusher. I told him I’ll hold it down until he gets back.”

NOTES: Walsh seemed most impressed with Geter. “That quarterback will take them a long way,” he said. “They’re a playoff team for sure.” … Trivett said Wells remains day-to-day. He was seen strolling the SHS sideline in street clothes. … Salisbury finished with 183 yards passing and 20 first downs. It never punted. … Besides Adams, DaShawn Brown also recovered a fumble following a sack of South quarterback Jamie Klassette in the opening period. …  South has been outscored 152-9 this season. … Both teams open conference action next Friday. Salisbury plays its fourth straight road game at Thomasville in CCC play. South kicks off its SPC season at Northwest Cabarrus.