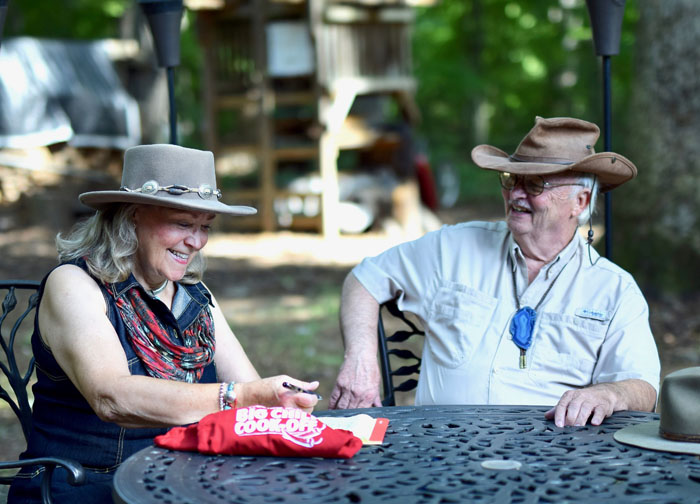 An interview with Henry Alexander, Waterworks’ “Godfather” of Big Chili

This Waterworks Big Chili Cook-off began in 2009, and although it’s 13 years since it started, this is the 11th time for the competition. Because of COVID, the event was modified to a more health conscious drive-through situation in 2020, where only three varieties of chili were offered. And last year, the event was canceled altogether.

Because so much time has gone by, a brief look back might be appropriate. Perhaps the best person to discuss its history would be the man who came up with the idea in the first place, Henry Alexander. Dr. Deborah Lucas, a member of the board of directors at Waterworks, interviewed Henry to find out the details.

Dr. Deborah Lucas: Henry, how did you come up with the idea?

Alexander: Well, back in 2009, Waterworks had just the one big fundraising event each year, the annual Oyster Roast, held in January. Waterworks’ Executive Director Anne Scott Clement was looking for another fundraising activity, and like other folks, I began trying to come up with something. Around that time, my wife Karen (Salisbury Mayor Karen Alexander) and I took a vacation trip to St. Simon’s Island, Georgia. We went by a little park where they were selling chili. It wasn’t any sort of competition, but after I saw how popular it was, the idea stuck in my mind. When we got back to Salisbury, I pitched the idea to Anne Scott. A week or two later, she called me on the phone and said we want you to come down here and help put this thing together. I thought, ‘Well, I don’t mind coming up with the idea, as long as someone else gets it done…’

And did you help?

Yes, and it wasn’t long before Anne Scott said, ‘We want you to head this up.’ Pretty quickly though, others pitched in and we had a really good group working on this.

Where did the name ‘Big Chili’ come from?

That was the committee’s idea. It was sort of a play-on-words from the movie, ‘The Big Chill,’ that comedy-drama from the early ‘80s. The graphics were going to be like, ’The Big Chill –i’ with that ‘i’ tagged on at the end. The problem was that a lot of people never saw or heard of the movie. So we just called it “Big Chili Cook-Off,” and it’s been that way ever since.

The Waterworks chili cook-off isn’t like most cook-offs, is it?

No, and that was something we figured out early on. Typically, a chili cook-off has a small number of professional judges who taste the chili and come up with the winners. What we decided to do was to have the guests, the people who buy tickets and attend the event, be the judges. Each team of cooks makes about five gallons of chili, and they offer 2-ounce shots of their particular chili to the guests, and they sample each team’s chili and vote on which team’s was the best. These little cups only hold a few ounces. That doesn’t sound like much, but when you multiply that by a dozen or so, depending on the number of teams, and add in drinks, cornbread or crackers, and dessert, you’ve got a substantial meal.

So, do people invite their friends to buy tickets so they could come in and vote for their team?

Yes, they do. And a lot of times, the teams bring other things to make their tables more appealing; more likely to get votes. Like they might wear clever hats or shirts, add decorations, or condiments like crackers, pickles, cornbread, cheese or whatever.

That doesn’t sound like it’s judging who actually has the best tasting chili. It seems more like a popularity contest.

Well, yes, I guess you could say that. But in fact, when you get down to it, that’s what the whole evening is about – who’s having the most fun? Why, I remember one year, there were a couple of attractive young ladies who called their team the Red Hot Mamas, and they called their entry, “Not Your Mama’s Chili.” As I recall, they had that on their T-shirts. I couldn’t understand it — I didn’t think their chili was as good as mine, yet, for some reason, they had a crowd of people 20 deep in front of their table, and I had nobody in front of mine.

So you entered your chili each year?

And how many times did your chili win?

Well, I came in fourth once. But maybe you should think of me like when Bob Hope was the emcee for the Academy Awards every year. He never won anything, but he was always there.

So what sorts of chili do people cook? Anything unusual?

Oh, sure. There have been Cheerwine chilis, chili with venison, vegetarian chili, white bean chili, chicken chili in a sort of white sauce, and Cincinnati-style. The thing is, usually none of the teams of people who compete actually make chili for their living. Oh, we’ve had people who are involved in the restaurant business or catering, but cooking chili isn’t typically a part of that. This is totally something they do as a way to give back to the community.

The event is going to be in the F&M Bank Trolley Barn next door to Waterworks on Liberty Street downtown. Has it always been held there?

Yep, right from the beginning. The F&M folks have always been wonderful sponsors. They’ve even had a team of cooks at a number of the events, and they’ve entered this year.

Do you decorate the Trolley Barn for the event?

Oh, sure. Through the years, we’ve tried a lot of different things. Sometimes they’re a success and we continue them from year to year. Other times, it doesn’t work out so well, and we drop it. We started out on a shoestring and grew the event from there. After a while, we were bringing in bales of straw, cactus, horseshoes and other things. We had a mechanical bull for a while. We’ve had dance lessons, a silent auction, even a lasso contest one year. This year, we’re going to try out having some time for karaoke, where people can get up and sing a well-known song to the background music. We’re encouraging everyone to wear western attire, so if there’s anyone who wants to try out their vocals on a favorite George Strait or Miranda Lambert tune, practice up, and come on down!

Back to the chili cook-off itself: Does the winning team get a prize?

Oh, sure, there’s a beautiful trophy for the winner. It rotates from winner to winner. Also, one of Salisbury’s great potters, Cheryl Goins, creates an individual chili bowl for each of the teams. So everybody wins. Some of the teams have a collection of chili bowls from various years, and they make a nice display, showing off their support for Waterworks and the community.

One last question, Henry. It sounds like the point of this supposed cook-off isn’t about finding the best chili cooks in Rowan County. In fact, it’s really only an excuse to have fun, isn’t it?