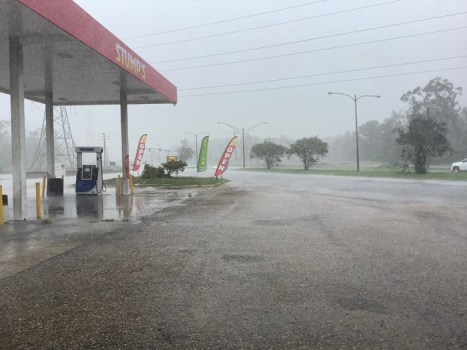 Heavy rain greeted David Freeze, with this storm hitting just as he got to the store. 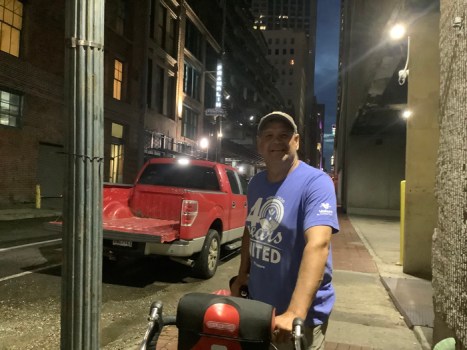 After David Freeze had tire problems, he met David Bourg, who drove him 30 miles to his hotel in New Orleans. 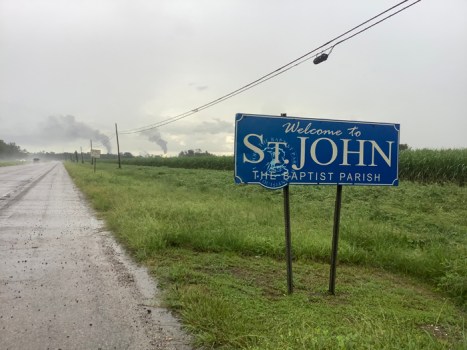 David Freeze found the most trash he had seen along the roadway as he headed into St. John the Baptist Parish, Louisiana. The day’s ride ended after metal, wire and glass all day beside the road played havoc with Feeeze’s supply of inner tubes.

Just one day of riding remained, if all went well. A long day of riding through lots of stoplights, and unknown roads. About 85 miles until I would spend the night among the big buildings of New Orleans.

Things started off OK back at the Comfort Inn in Baton Rouge with fresh eggs for breakfast. But then a slight wrong turn meant I had to ask directions at the Circle K. Siri was confused about my last day on U.S. 61 South and wanted me to go north. Good directions got me on the right track, only adding about a mile of riding. One man in the store happened by and said, “You’re going right!”

I pedaled through Prairieville, St. Gabriel and Gonzalez before the heavy Saturday traffic died down. During this time, the road got bad on occasion and I began dodging lots of metal, wires and glass. A few times, I tried to ride in the lane to avoid so much trash.

Then a tremendous storm struck around midday, but it allowed me make shelter at Stumps convenience store. But not before the gusts of wind took my blue and black cap that had made so many trips. I turned around and couldn’t find it so I pedaled hard for the store. I stayed for a half hour and talked with Ann and crew, before heading back to the road.

About 45 miles into the ride, my luck turned sour. I felt the back tire going flat and sure enough it was. My average has been about 1,000 miles per flat and I am well over that on this trip. With rain falling, I took off the back tire and found a chunk of metal and one wire in it. I didn’t feel any more, so I put a new tube on and found it had a hole too. It probably was defective, so I got out another one and it wouldn’t hold air either. Only one left and I was frustrated and tired of changing tubes. This task made worse by the steady rain and the fact that I knew I needed to be pedaling if I had a chance to reach New Orleans by dark.

God sent two angels, the first one in Johnny Walker who was motorcycle touring out of Florida. Then a few minutes later, David Bourg pulled over to help too. We put my last tube on the bike, hoping that it would last the remaining 35 miles to New Orleans. I left David and Johnny, hoping that we could stay in touch by email.

About 5 miles down the road, the back tire went flat again and I was now out of tubes and with no chance to make the big city by nightfall. I tried Uber snd they couldn’t supply a driver, so I reluctantly called David Bourg back. He had another project going, but decided to drive me to New Orleans.

On the way, David told me about the time a judge stopped to help him on the highway late at night. David, who works for Valero in refinery planning, gave me the most pleasant experience by sharing his thoughts and life lessons and asking about mine as we drove. He is convinced that we all should “pay it forward,” doing good for others and only expecting that they will do the same for someone else. That is exactly what he did for me tonight. This was a three hug evening and at least four handshakes too. I suspect that David and I, and Johnny too, will stay in touch. Two guys came along when I was about out of options and they made the day a lot better than it was likely to end.

With that, I am secure in my downtown Best Western in New Orleans. My bike isn’t in the room, but I am convinced it will be OK. Its ride is done for this adventure. Only 51 miles done today.

I have a small section of the upper Mississippi to ride, not sure how much but I will figure it out when I get home. And I have 30 miles left to ride into town. Those two I’ll make into an interesting upcoming road trip.

Tomorrow will be all about sightseeing. I am going to the fantastic World War ll museum, just a few blocks away toward the north and then Jackson Square, where all the street vendors perform. Plus whatever else I find. We’ll talk about that tomorrow. See you back here then!