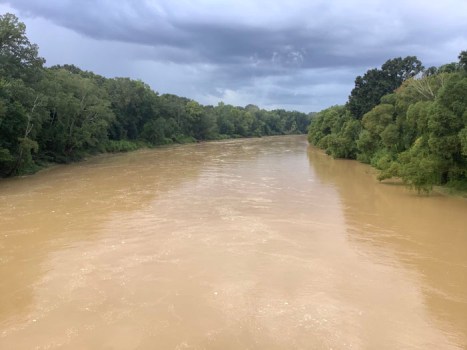 All the rivers were full from rains a day earlier. David Freeze photo 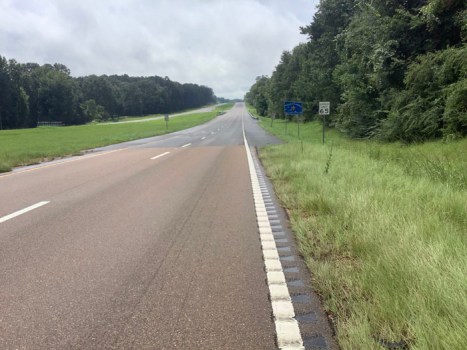 The last few feet of the road in Mississippi before reaching Louisiana and its wide cycling/breakdown lane. David Freeze photo 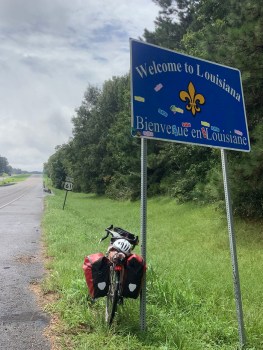 David Freeze was glad to finally be off the bike in Louisiana. 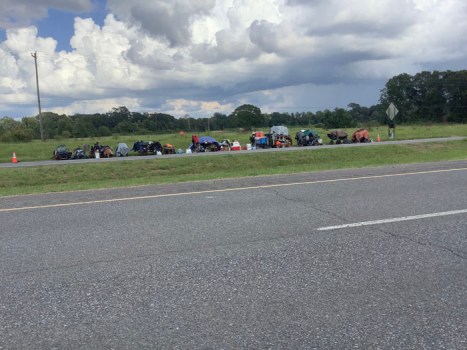 A homeless camp of sorts, with people covered ahead of the coming storm, was on the side of a roadway. David Freeze photo 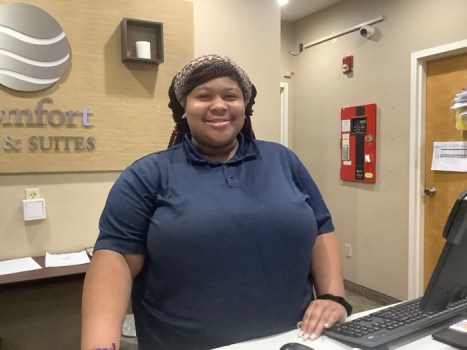 Precious, who was behind the desk at the Comfort Inn, was a big help to David Freeze when he checked in just seconds ahead of a downpour. 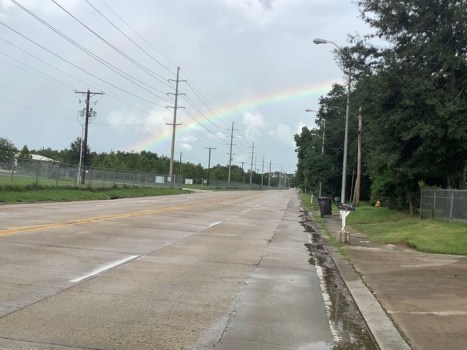 A faint rainbow from the storm that had passed by previously is seen in Baton Rouge, Louisiana. David Freeze photo

I knew today’s ride would be a challenge from the start. Rain was again in the forecast and at least the first part of the ride was going to be hilly. Still a little bit dark because of the clouds, I hit the road anyway. Out of food, I got two awesome egg and cheese biscuits first thing in a convenience store while still in Natchez. Following that was a 6-mile climb that finally ended at a store called the Big Hill. At least I knew it was the most significant one after that.

At least one reader was confused about why Mississippi is hilly after I said it was pancake flat in the Delta part of the state. I was surprised too, because when I got to Vicksburg the hills were back in a big way. That is why the Confederacy had the high ground in the battles there and the hills continued until I had been in Louisiana for a few miles. This part of Louisiana is about like Rowan County, some hills and some flat but nothing too extreme.

My only goal at the start was to follow U.S. 61 South through a little town called Woodville and get to the Louisiana border by noon. Woodville was the only town for the whole morning and the last one in Mississippi. I kept pushing and made 46 miles and the Louisiana border at 12:03, close enough. At the state sign, I got a full lane to ride in and the terrain started to calm down.

I pedaled past town signs that didn’t have much or any town including Laurel Hill, Wakefield, Bains and Hardwood, then suddenly St. Francisville was busy with heavy traffic. All morning since Natchez and on down to near Baton Rouge, historic antebellum mansions were set back from the road. I only got a good glimpse of one, but still far away. Many are now bed and breakfast locations.

I stopped at a post office in Louisiana and shipped a box of stuff home, my sleeping bag and a lot of materials gathered along the way. It filled the largest “one price” box to the brim and I have more room to pack my stuff for the train.

Rain fell off and on all morning, not hard enough for a jacket, and any wind was significant. Then it cleared in the afternoon and got hot. Ahead toward Baton Rouge, storms with dark blue clouds started to build as I got closer. I saw what may be the oddest thing I have ever seen beside a busy road about this time, a long stack of goods that were covered in tarps. Just feet away from very busy traffic. Looking closely, I could see people under tarps too, just waiting for the rain to come. They must push or pull the goods by foot because no powered vehicles were there.

Worried about the storm myself, I didn’t have a room and needed to get one. I called the Comfort Inn to see if my new choice membership would help. Most importantly, I needed something sort of on the way to New Orleans. This morning, I decided if all went well today, then I would make an attempt to reach New Orleans tomorrow. Precious, the desk clerk, went to work and helped me get a reasonable deal. With the storm building and very close, I pedaled the last 6.5 miles for all that I was worth, arriving about 2 minutes before the downpour. Along the way was a beautiful rainbow, in a part of the sky where the rain had already fallen. That ended the day at 85 miles.

Greater Baton Rouge is approaching 500,000 people and heavily industrialized city. It is the northernmost port on the Mississippi capable of handling today’s mega-sized ships. During most of the Civil War, the city was occupied by the Union Army.

I am across from the Baton Rouge airport, with a nice window overlooking it. I did have Blue Bunny banana split ice cream while planning for tomorrow. Thanks for reading and riding along. See you back here tomorrow.