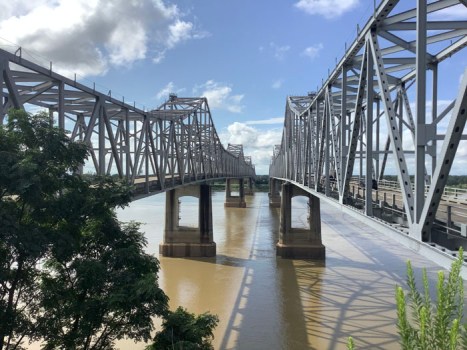 These bridges cross the Mississippi River into Louisiana. The water was muddy and full of debris after heavy rain overnight and most of the day. David Freeze photo 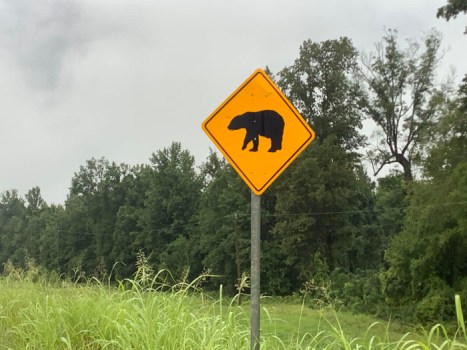 Who knew that Mississippi has bears? Teddy Roosevelt actually came here to hunt them but couldn’t find any. David Freeze photo 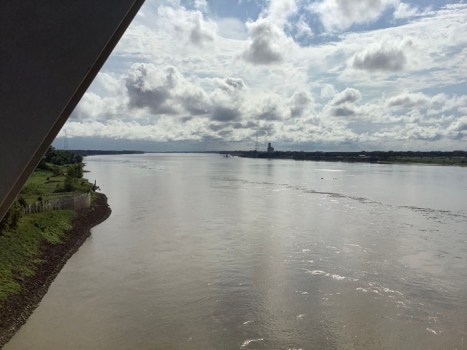 David Freeze’s motel for the evening in Natchez, Mississippi, is just up the hill — a very steep hill — from the Mississippi River. 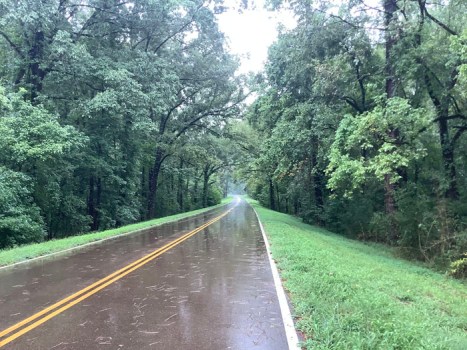 David Freeze rode 31 miles this afternoon on the Natchez Trace Parkway, most of it during heavy rain.

Sometime during last night, I heard a huge clap of thunder. I didn’t think much of it but this morning’s forecast had changed to heavy rain for most of the day. Just light drizzle early, off and on at that, didn’t bother me too much. What bothered me more was how suddenly lots of climbing was back in the mix. I learned last night that a long series of faults between Vicksburg and Natchez would override the flat riding that I came to love.

Most of the agricultural traffic and some of the other commercial traffic probably was lessened due to the rain, but visibility was poor enough that some of the trucks still got pretty close. Rumble strips all morning just added to the pressure to stay safe.

The first town today, still on U.S. 61 South, was Port Gibson. Lots of beautiful old homes and rough roads, but the reason the town exists in its current manner is because General Grant decided not to burn it, saying, “This town is too beautiful to burn!” Just as I was leaving town, I spotted a sign about the Natchez Trace Parkway just ahead, sort of a linear National Park that stretches for 444 miles. It’s known as a Holy Grail for adventure cyclists, famous for its well kept scenery and history. Just yesterday, Layne Logue, one of the many people I met during the day, told me that I should try some of it. I told him that I likely wouldn’t because it is secluded and just long segments of singular riding, Cars are allowed, but nothing commercial.

With the rain, rumble strips and “too close for comfort” trucks, I decided to ride a portion of the Natchez Trace, just to gather my thoughts without traffic and bad roads. It does have long grades but no steep hills, and is amazingly well kept. For 31 miles, I pedaled in the rain and made up some of the time that I lost earlier. U.S. 61 crosses the parkway twice and I got on the first time and off 31 miles later. Time well spent!  At least once I thought of giving up for the afternoon and stopping at a motel in Port Gibson, but the parkway saved a 78-mile day.

U.S. 61 passed through Washington and then suddenly, I had found the outer limits of Natchez. I already had the Deluxe Inn lined up for a room, and it just happened to be near the river. I rode to the two bridges that cross into Louisiana and back, got some good photos, grabbed some food from a local grocery and got started on my daily report.
I’m about 40 miles from Louisiana and Siri says 185 or so to New Orleans. I will start looking for accommodation options shortly, especially with rain still an option for tomorrow. I will get really close to an area where I passed through Louisiana just after Hurricane Ida. Believe it or not, I will mostly use U.S. 61 South all the way to New Orleans. There is something special about these really long associations with certain highways. I just hope it loses the rumble strips in Louisiana.

No ice cream today, but I will find some tomorrow. Join me back here as we go visit Louisiana again. Thanks for riding along!