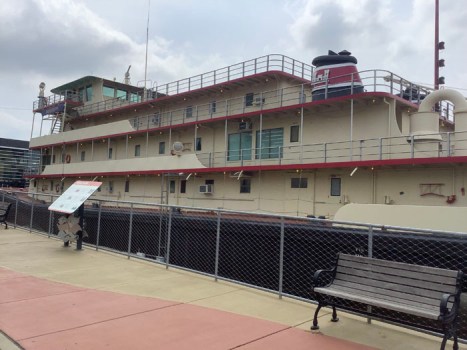 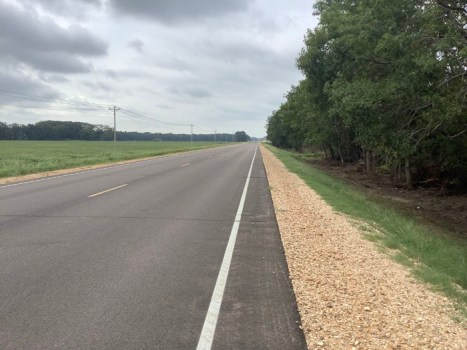 Newly paved road on US 61 with no rumble strips. David Freeze photo 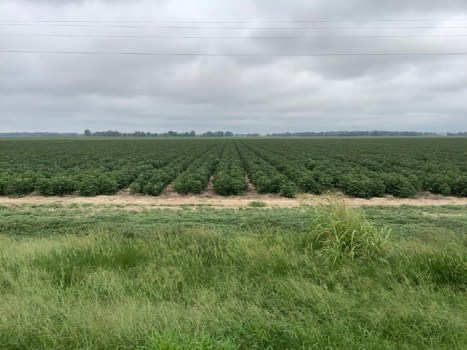 Cotton grows in rows as far as you can see. David Freeze photo 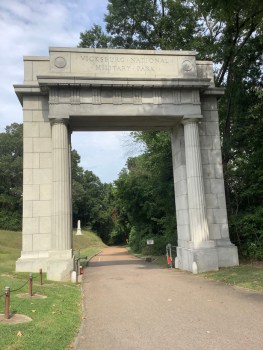 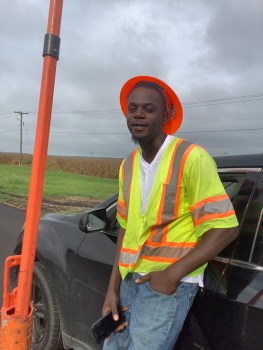 Quentin was working with APAC paving on US 61 and was going to read the past Post stories about the journey. David Freeze made an extra mile per hour on the newly paved portion. David Freeze photo 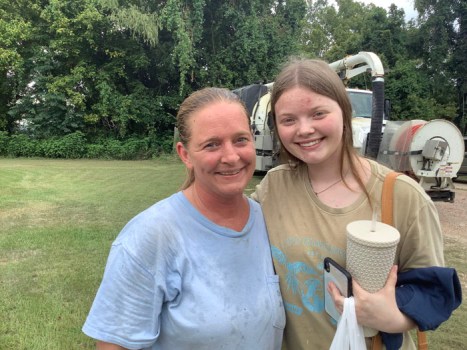 Ann, left, and her daughter MacKenna gave David Freeze directions on entering Vicksburg, Mississippi, and suggestions on whether to visit the city or the military park first. They own Country Junction, a restaurant on US 61. David Freeze photo

Cloudy and very humid from the start, I pedaled out of Hollandale without a visible sunrise. For the first 10 miles, I rode inside the lane with light traffic. Most of the traffic seemed farm related and patient enough with me, but I was glad to have a red flashing rear light working well.

Panther Burn passed by but looked more like a big farm. Then came Nitta Yuma, getting my attention right away from the bike seat. At least nine of the buildings in this little community are antebellum, meaning from the 1700s. Once with 600 residents, only about 20 remain and change comes hard to them. The little town has gained some world wide attention. Next was Anguilla where I finally got a good breakfast deal on two awesome egg, cheese and tomato biscuits.

Rolling Fork was next, then Cary, Valley Park and Redwood. Enough good stores with ice available. I made great time with a wind that couldn’t decide what to do. About 40 miles of the 70-mile trip was on recently paved road, mostly without rumble strips. I met Quentin at one of the paving spots today where he was flagman and we had a nice conversation about my trip.

Surprising, but it shouldn’t have been, as I neared Vicksburg, hills came back. A couple serious ones after more than 60 miles of pancake flat. I just called on my Missouri muscles and noticed that the Yazoo River was part of that mix. About that time, I saw a sign for downtown Vicksburg but needed some answers from Sue and MacKenna who own the Country Junction restaurant where I had stopped. Just up ahead was a huge hill to continue on U.S. 61, and a flat entrance exited toward Vicksburg. Sue said to take the flat exit and that it would all work out.

Still about 6 miles of rough roads and plenty of trucks on the way to the Vicksburg Port kept me wary, but I finally made the downtown. The river was not the Mississippi, but it used to be there. I stopped at the Jesse Brent Lower Mississippi River Museum and got the scoop. The river used to be here but moved away, leaving the Yazoo to serve as a canal for light shipping. Attached to the museum was the Mississippi lV towboat, a huge boat that was driven by diesel power.

Also I learned at the visitor center within the museum that no ongoing downtown tours are available, a big surprise and disappointment to me. Hannibal does well with theirs and Vicksburg is loaded with way more significant old buildings, notable people, and of course the Vicksburg National Military Park.

Speaking of the park, that’s where I headed next. Just in time to see a great movie about what happened to residents during the Civil War, I think the story is fascinating. The Union attacked several times and couldn’t take the entrenched town because the Confederates had the high ground. Yet, Lincoln and Grant decided to “out camp” them, blockading the city so that no food could get in. The Confederates had to surrender and with it came control of the Mississippi and splitting the Confederacy in half.

To get into the military park, I used my lifetime senior pass purchased out west a few years ago for $10. A great deal! Speaking of that, the Y Service Club at the South Y has decided to renew my ice cream fund after all.

Finally, as I was leaving the military park, Layne Logue, a civil engineer and wilderness canoe expedition leader, stopped me for a some great conversation about my cycling and his canoeing. He takes big canoes out on the Mississippi and goes camping on sandbars, all sounding like great fun to me. He sent me great suggestions by email for my trip tomorrow to Natchez.

I’m in the best room of my trip yet, a first class Quality Inn. Trina, who signed me in, also said the breakfast shouldn’t be missed. I won’t.

A big day, full of people, and now onto Natchez. If all goes well, tomorrow will be my last full day in Mississippi. Since Vicksburg turned out to not be on the real river, I have been assured that Nachez is. You’ll hopefully get photos of it tomorrow. Join me back here for that.