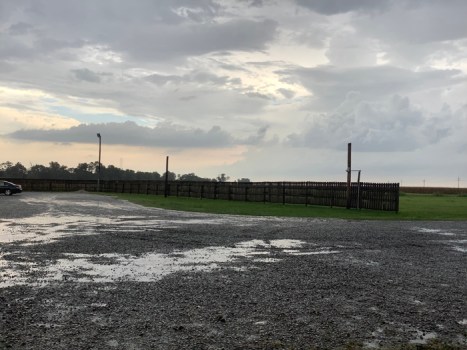 The skies start to clear after a huge lightning and rain storm hit the Hollandale, Mississippi, area 5 minutes after David Freeze got off the road. David Freeze photo 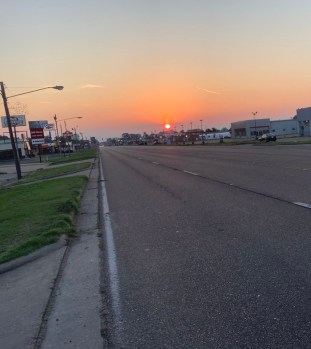 Leaving out from Clarksdale, Mississippi on Tuesday morning just as the sun is rising. David Freeze photo 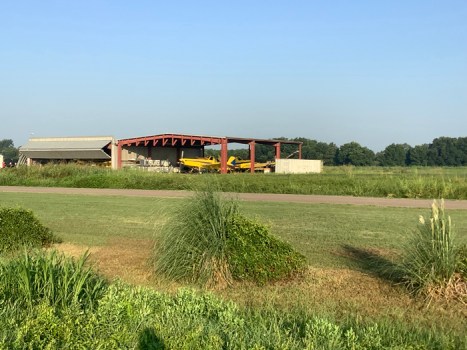 David Freeze saw crop duster planes throughout the day, the last time just before a major thunderstorm hit the Hollandale area where he is spending the night. David Freeze photo

Just as the sun was starting to rise, I pedaled away from the Quality Inn  at Clarksdale, Mississippi. Forecasts called for a chance of thunderstorms and not quite as hot. I decided to pedal south on U.S. 61 and then make a call or two along the way. I wanted to go to Greenville because the river might touch the town, but I wouldn’t know for sure until I talked to the visitors center there.

On the side of a four-lane busy road but out in the driving lane due to Mississippi rumble strips, I passed by exits for Duncan, Shelby, Winstonville, Mound Bayou and Merigold before hitting the busy town of Cleveland, which has about 12,000 residents and is large for this area. Afterwards, only Boyle and Shaw were towns as I pedaled into the heat and Leland. It was decision time.

I called the visitors center in Greenville and asked the question. Did the river touch the town? Politely I was told by a friendly woman that it did not, unless you pedaled south of the city limits and went to a park. There was a lake in town, but I decided to skip Greenville and get a jump on Vicksburg. Instead of pedaling west. I stayed on US 61 as it cut down to a two lane road with no shoulder just past Leland. It was a beautiful area of crops and enhanced by a yellow crop dusting plane that I continued to see for much of an 82 mile day. At last sighting, he was just past 50 miles from his home base which was also on 61 South.

Supported by positive winds all day, I could see storms starting to build and felt the wind changing to a strong headwind. Approaching Hollandale, massive corn harvesting was happening all around me. Huge combines and other equipment pushed until the minute rain started to fall. Suddenly it was all shut down and the corn in the bins covered.

With rain all around, I was looking hard for Cotton Country Inn. I had called this morning and arranged for a room, just a basic room but sight unseen. Thankfully this one turned out well, with good Wi-Fi, ice and plenty of room. The only food stores in town are Dollar General and a Stop and Shop small grocery store. Everybody in the grocery store seemed to know everybody else.

I am not a fan of Mississippi roads and this afternoon, I discovered another reason for discontent. Only cyclists would notice but sometimes two slabs of concrete have a two inch gap between them, just enough for a bike tire to fall into it. Twice it happened this afternoon. No damage so far.

Today wasn’t thrilling and nothing unusual happened except for the weather. As early as possible, I plan to get to Vicksburg and do the city and battlefield tours plus spend some time at the waterfront. Vicksburg was a pivotal city in the Civil War and it’s rumored to be one of the most beautiful in the Deep South.

So with that, I will close for tonight and meet you back here tomorrow with another new city with much to explore. Thanks for riding along and for continued messages and prayers!