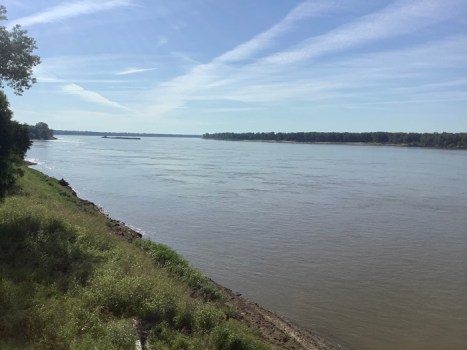 The Mississippi River is seen at New Madrid, Missouri, a unique stop that stood out for David Freeze among all his many adventures. 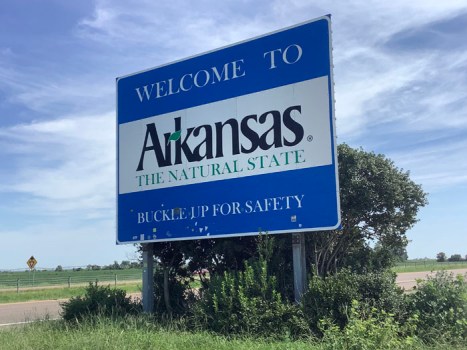 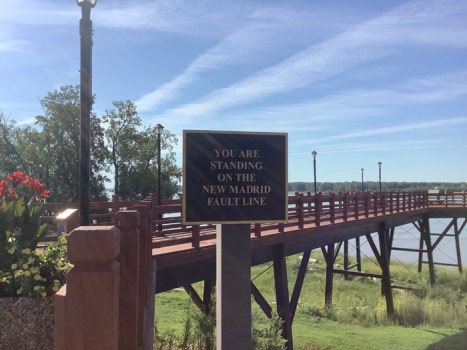 An observation deck overlooks the Mississippi River but the sign signifies that New Madrid is on a fault that caused a huge earthquake in 1811. Tremors continued for more than a year afterwards. David Freeze photo 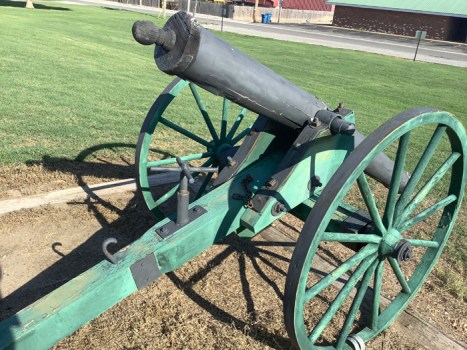 New Madrid was the site of a significant Civil War battle that used some new strategy and was pivotal for Union forces in their quest to control the Mississippi River. David Freeze photo

My mind had several scenarios rolling last night that kept sleep from being the best. I was excited for what the day might bring in New Madrid, Missouri. The desk clerk at the Super Eight in Sikeston told me not to miss the town or the museum. I was still unsure about whether to take 61 South or use I-55, which is obviously way quicker because of the quality and width of the surface in the breakdown lane. Determined to make it a good day, I used I-55 except for the route from the interstate to downtown New Madrid.

A quick 22-mile ride got me to the waterfront and just ahead of the 9 a.m. museum opening. The Mississippi River was especially beautiful in the early morning sun from an observation area that makes viewing the river even better. Instead of a wall, New Madrid has a levee, dirt built up to a high flood level and then stabilized by grass and in this case a walking/driving road.

New Madrid is a beautiful little town of over 3,000. In 1811, one of the world’s most powerful earthquakes to this day occurred with all sorts of wild claims of what happened during that day and the next. New Madrid sits on a fault line that spawned earthquakes for the next year and from 5-25 per year since. One claim was that the Mississippi River flowed backwards during this time, which scientists think that parts of it suffered upheaval and actually did change the course of the flow for a day or two.

Just as interesting to me was a Civil War battle that took 20,000 Union forces to overtake New Madrid and her two forts. One of those was on Island #10, which has since been washed away by the ever changing Mississippi. Those events helped the Union forces eventually control the river.

I took about an hour for a tour of the New Madrid Historical Museum. Administrator Jeff Grunwald was the perfect host. My bike was a popular conversation piece while I was in town.

I left New Madrid for a 50 mile ride that included US 61 and then more of I-55. I passed Portageville, the soybean capital of the world, but not much else on another perfect weather day. A tailwind and low humidity with mid 80s for a high.

Some fun was yet to come as I had called and left my name last night for a room at the Super Eight Motel in Blytheville, after the success of the previous two nights. I found the motel near my exit off I-55 and rolled to the door. Nothing looked good, the door was locked and plenty of unusual characters were hanging around. I called the Quality Inn, Days Inn and America’s Best Value Inn and got the perfect room for a great price from Dana at ABVI. And for the first time on the trip, I will have a real breakfast included. Complete with eggs! I really enjoyed talking with Dana about the trials of finding a good motel on the fly and her interest in cycling.

Another interesting tidbit from the day included my anticipation of crossing into Arkansas and whether I could continue on the interstate. With just 5 miles, left to Blytheville, I crossed the state line and kept pedaling, possibly a little faster. I stopped at the Arkansas welcome center and talked to the attendant who told me, “Yes, I’ve never been told you couldn’t.” 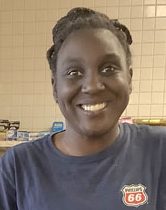 Jaimee Williams at David Freeze’s last stop of the day.

Blytheville is one of those interstate exits that has everything. Dana told me there was a Waffle House, but I found one actually named Waffle Inn and not open tonight for some reason. I settled for the Impossible vegetarian burger and ice cream from Burger King. Then I rode to the nearest convenience store and struck up a conversation with Jaimee Williams about the bike ride. I loved her upbeat attitude and appreciation for what I had done on this trip and the others previously. It was great to talk with Jeff, Dana and Jaimee today, all positive and fun and the very best thing about going on these bike adventures. Good people cross my path continually.

About all I have planned for tomorrow is that I will likely head toward West Memphis, which is still in Arkansas and see if I can cross the river and ride down the Mississippi side for a while. It’s still up in the air but the Arkansas side only visits the river one more time until that side crosses into Louisiana.

After 79 miles today, I am less than 500 miles to New Orleans. Highlights still ahead include crossing the river near Memphis and visits to Vicksburg, Natchez, Baton Rouge and the finish in New Orleans. I count this as a very good day and hope you enjoyed reading about it! See you back here tomorrow!