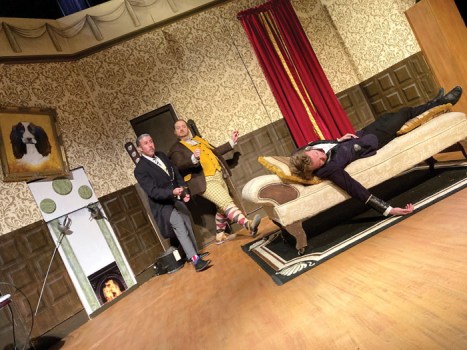 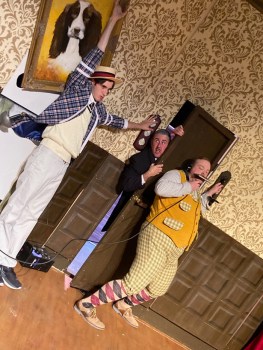 Cecil Haversham (Noah Goldstein), Perkins (Dan Grogan), and Thomas Colleymore (Nick Culp) all deal with how to continue the scene while props around them are falling off the wall. 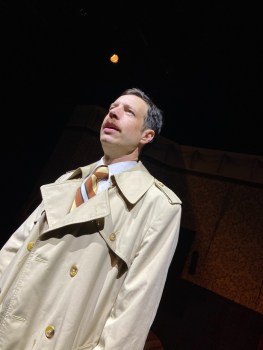 Chris Bean (Jonathan E. C. Wallace), the production director who plays Inspector Carter) welcomes and apologizes to the audience for any confusion is Lee Street's "The Play That Goes Wrong." 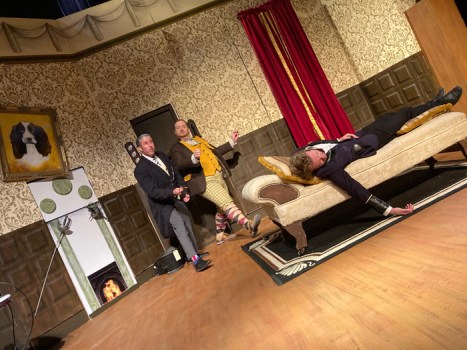 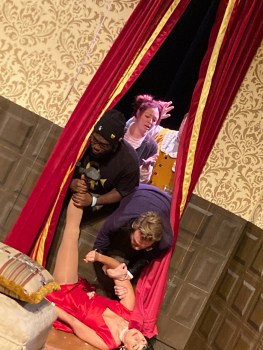 The Cast of "The Play That Goes Wrong" figure out how to pull the knocked out Florence Colleymore (Lauren Wilson) off the stage through the window. 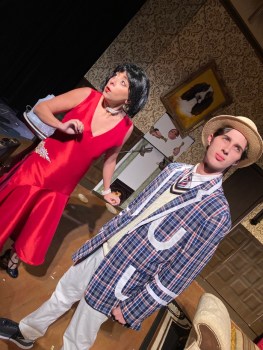 Florence Colleymore (Lauren Wilson) and Cecil Haversham (Noah Goldstein) try to keep their love affair secret, while the stage manager Annie (Ashley Pearson) tries to figure out how to get the candles through the broken fireplace mantle.

“The Play That Goes Wrong” is supposed to.

Audience members are in for the wildest ride they’ll ever have seeing a live theater production.

Lee Street theatre opens its Season 15 with this riotous comedy that has garnered rave reviews from nearly everyone.

“The Funniest Play I Have Ever Seen on Broadway or anywhere else” — WABC-TV, “A gut-busting hit! The audience roared as loudly as the crowds at any wrestling match” — The New York Times, “I actually peed my pants. Thank you?” — Cate Blanchett, “I’m compelled with laughter. Funniest thing I’ve seen in years,” — John Lithgow.

It’s the opening night of the Cornley Polytechnic Drama Society’s production of the murder mystery play “Murder At Haversham Manor.” They’re really not ready for an audience, but the show must go on just the same. And so it begins.

You must feel sorry for Chris (Jonathan E.C. Wallace). He’s the director of “Murder at Haversham Manor,” and bless his heart, has done everything in his power to whip his cast and crew into shape. Every time the audience laughs at his serious mystery, his frustration increases. Wallace also plays the role of the esteemed Inspector Carter.

Annie (Ashley Pearson) is the company stage manager, initially terrified by acting but willing to kill for it by the end of the play.

Robert/Thomas Colleymore (Nick Culp) wants to be the president of the drama society. As an actor, he thinks he’s another Richard Burton and never learns from his mistakes.

Dennis/Perkins (Dan Grogan) has no desire to be in theatre. He just wants to have friends. He believes if he does well in the production, he’ll be more successful socially.

Trevor (Mason Livers) is the company’s lighting and sound operator. It’s just a job for him. He doesn’t like actors, but when things “go wrong,” he is forced to act in the play.

Jonathan/Charles Haversham (Maxwell Gregor), is pretty bland but sees himself as James Bond-like. He pretty much has to drive the show, but art isn’t a big thing to him. He just wants to have a good time.

Max/Cecil Haversham/Arthur the Gardener (Noah Goldstein), childlike and naive, has never been on stage before. As green as a just-picked banana. But he does what he’s told. But when he gets a reaction from the audience, the experience completely changes for him.

Sandra/Florence Colleymore (Lauren Wilson), is very vain with a huge ego. Her goal is to make it in Hollywood, and she’ll do anything necessary to make her dream come about. She’s nice to anyone (who can help her).

“Murder at Haversham Manor” begins, and things quickly go from bad to utterly disastrous. An unconscious leading lady, a corpse that can’t play dead, and actors who trip over everything (including their lines).

“The Play That Goes Wrong,” by Henry Lewis, Jonathan Sayer, and Henry Shields, is the most sought-after new release to community theaters in 2022. Lee Street theatre is thrilled to present the Region Premier production. The show is directed and designed by Rod Oden. Stage manager is Raquel Oden. Zac Hunter is master carpenter. Costumes are by Beth Bentley. The tech crew is comprised of Beth Bentley, Peter Bentley, Julia Rockwell, Grayson Surgeon and Colleen Welday. Scenic charge and painters are Colleen Welday and Julia Rockwell.

A good time will be had by all, and that’s a promise.