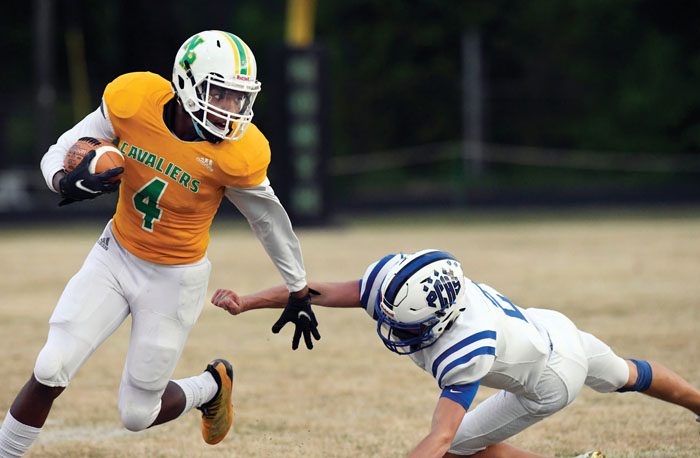 Third in a series of reports on local high schools …

That was a fiercely fought loss far from home in the third round of the 1A state playoffs. Robbinsville couldn’t contain the explosive Cavaliers, but North got trampled by Robbinsville’s running game.

“We were one stop away from the fourth round,” North head coach Nygel Pearson said. “The way our guys showed up in the playoffs gave us some confidence and it gave us some momentum going into a new season. We know we’re blessed with playmakers on offense. If we can get more stops, we can take that next step.”

North has a few more bodies this season, but it’s still not going to have the numbers to match some of its opponents.

Pearson said there are 50 athletes in the program, including 15 seniors. The good news is there will be a jayvee team in 2022 after not having one last fall. The experience provided by jayvee playing time is essential for North as it tries to remain a factor on the regional and state level.

North posted a strong 8-4 record in 2022, but the Cavaliers also realize they were a few plays from a so-so 5-7. They defied the laws of probability by going 3-0 in overtime — winning an early county game with South Rowan, an epic CCC fight with East Davidson and a second-round playoff shootout at Thomas Jefferson Classical Academy.

That means the Cavaliers were clutch, but it also means they were pretty fortunate.

North scored a school-record 39.5 points per game in 2021, but the Cavaliers also allowed 31.1 per game, so it was frequently exciting. Too exciting.

North scored 57, 50 and 66 in the regular season and even put up a 62 in the first round of the playoffs. On the flip side, Salisbury racked up 60 on the Cavaliers, while Thomasville rolled for 59.

So most of the preseason emphasis has been on improving a 3-4-4 defense that will be guided by coordinator Marcus Hamilton.

Obviously, with the numbers North has, most athletes will be playing both ways. For instance, standout receivers Amari McArthur and Kemon O’Kelly will be used as DBs when necessary.

“We’re cross-training all our guys for offense and defense,” Pearson said. “We know we can put Amari and Kemon in the defensive backfield when we need to, but we don’t want to wear those guys out. We’ve got to bring some other guys along.”

The linebacking corps can be a strength.

Veteran Bryson Crisco has tackled a lot of people in his career. Khalil Davis is a buzz saw. Kh’ron Miller came on very strong late last season and has emerged as one of the team leaders. Trey Johnson, who recently finished a summer of American Legion baseball, will be a big factor. Noah Williams has some experience.

On the defensive front, Robert Caldwell and Jadarrion “JD” Sullivan, a transfer from A.L. Brown, will man two of the three spots.

‘We’ve got some good competition for the third spot,” Pearson. “We’re still looking for that third guy.”

Jeff Chambers, a Shrine Bowler for North and a standout at Western Carolina, has returned to the Cavaliers as defensive line coach. That will help.

Offensively, at least as far as the skill positions, North should be as good as anyone in 1A.

Mature beyond his years, Jeremiah Alford had an overwhelming season as a varsity freshman quarterback. He accounted for 38 touchdowns (23 passing, 15 rushing). He threw for 1,885 yards, while rushing for 899.

“Good football player and better kid,” Pearson said. “He’s a young veteran now, a sophomore with 12 varsity games under his belt. We’re excited about the things he’s going to do this season and in his career.”

Elusive running back Jaemias Morrow, now a junior, produced 1,301 rushing yards and 21 touchdowns in 2021. He averaged almost 8 yards per carry and topped 100 rushing yards seven times. He’ll probably get 15 to 20 carries per game.

Then there’s McArthur, a 6-foot-2, 195-pound senior wideout who is attracting Division I offers. McArthur may break every North season and career receiving record. He had 54 catches for 1,191 yards and 16 TDs a year ago.

“We’ve got to make the blocks for them,” Pearson said. “But we know how lucky we are to have big-play guys like that.”

O’Kelly hasn’t had the same level of production as McArthur, but he possesses a lot of the same physical attributes and is a breakout candidate. He had 16 catches for 266 yards and two TDs and came up big in the OT battles with East Davidson and Thomas Jefferson. He’ll be important with lots of teams double-teaming McArthur.

Xavier Suber and Cantres also will catch some passes. Miller, the standout linebacker, will get enough carries to keep Morrow fresh.

Johnson and newcomer Jordan Bailey will be the tight ends.

Caldwell, a tackle, and center Dalton Shepherd are expected to be leaders for the offensive line.

Kamahri Feamster, Yasir Wactor and Alex Colon are other names to remember as far as North’s linemen.

Daniel Montes Medrano won the East Davidson game with a PAT and is counted on to handle kicking and punting chores. He’s not a run-of-the-mill kicker. He competes in track and he’s begging the coaches to play linebacker.

The biggest concern for the Cavaliers is depth. They have three of the county’s best offensive players, but they have to keep those workhorses in one piece.

North also has lost the element of surprise.

“We know we won’t sneak up on anybody this year,” Pearson said. “Early last season, teams didn’t know what Jeremiah could do, what Amari could do, what Jaemias could do. Now they know, but we should still be very good on offense.”

Now it’s up to the defense to take the next step.

“We’re working hard at it every day,” Pearson said. “We’re getting there.”

Playoffs: Lost 50-47 to Robbinsville 3rd round