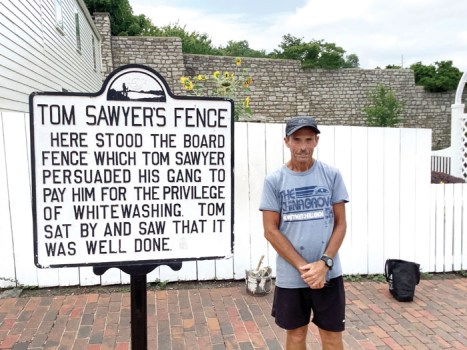 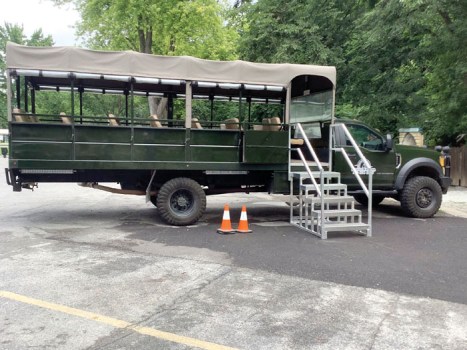 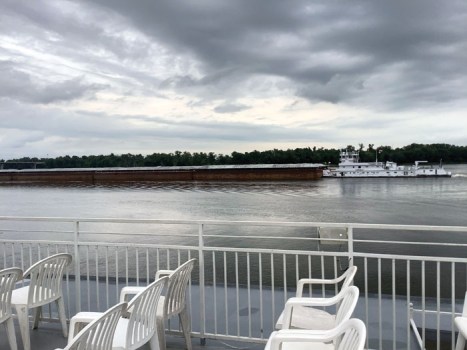 A working tugboat pushing barges up river past the sightseeing paddlewheeler while it was loading. Photo by David Freeze 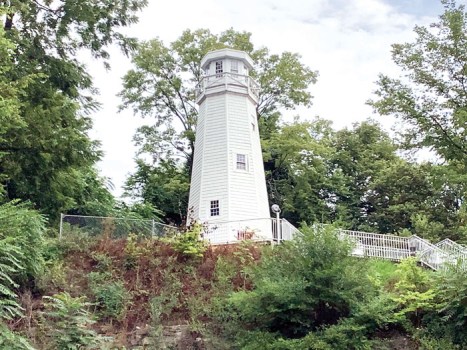 Mark Twain’s Lighthouse in Hannibal. Freeze didn’t climb all 242 steps but did walk over 5 miles on his day off from the bike. Photo by David Freeze 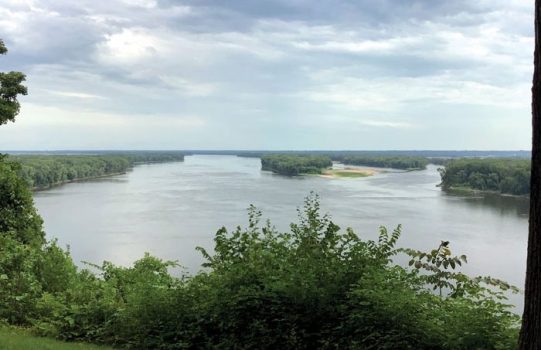 Freeze saw this overlook of the Mississippi River from the sightseeing tour truck. The Mississippi is shifting all the time and the island in the middle is growing. Photo by David Freeze 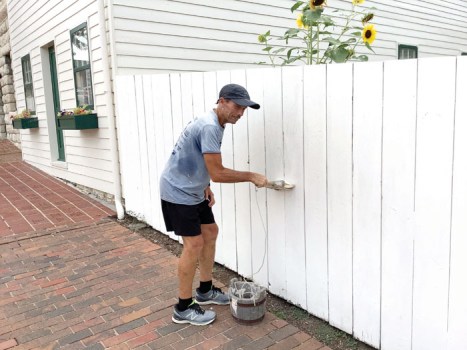 Freeze got to whitewash Tom Sawyer’s fence in Hannibal.

Last night, I went to bed with a lot of uncertainty. Not sure if the predicted heavy rain was coming, whether I needed a room for another night, how I could schedule everything for sightseeing and how to proceed down the river on Tuesday.
I have poor cell service here and had trouble making calls yesterday, but I decided to walk this morning to Mark Twain’s cave first, then catch the sightseeing tour and finally the riverboat excursion. It was supposedly just a mile walk to the cave which turned out to be closer to two. Late for the cave tour, I took the truck sightseeing tour first and an immediate cave tour afterwards. Both are done from the cave site, yet had I been on-time for first cave tour the timing wouldn’t have worked.
Both the cave and the truck tour were first class and an hour each. I walked back to town and had an extra 10 minutes before boarding the boat for another one-hour tour. The day was again warm and steamy here so I especially enjoyed the boat ride up the river and into the breeze. All three tours were just what I expected and full of information about Mark Twain, the river and the history of Hannibal.
Left with about an hour to walk around downtown, I did that and noticed a sign that Missouri was on the Great River Road yet I had not seen anything about it. I called the visitors center and was told, “Yes, we have a brochure on it!”
Finishing my downtown tour consisted of two things. I had to whitewash Tom Sawyer’s fence and did so with the brush and paint can provided. I met two new friends who did the photography of the event, but also asked about my cycling history. We talked for quite a while and shared how so many “God moments” had happened on my bike rides that He had to be riding along. Two more happened within minutes when I met this couple, his name was David too, just moments after I saw the Great River Road sign.
The second thing is a bustling general store in the downtown area that offers free cones of ice cream, one a day per person. I got my vanilla, walked around a while in the historic area to see Huck Finn’s house and take a photo of Mark Twain’s house.
With my time running short, I walked to the visitors center and picked up the map of the Great River Road all the way to New Orleans. I honestly didn’t know such a thing existed and now had found the answer to my worry about how to proceed on this adventure. Particularly good is that the road is depicted on both sides of the Mississippi and shows bridges that I can cross. So, now I have a plan, but will decide by tomorrow when is the time to cross to Illinois and see some of the other side. Following these roads will lengthen my trip by several days. And there are long stretches where the Great River Road doesn’t get close to the river on either side, but at least I now have options put together by knowledgeable people.
Lots more happened on one of my best days ever on the road. I am right across the road from Unsinkable Molly Brown’s house, made famous when she took a ride on the Titanic. This was only the second day, the Grand Canyon being the other, that I took a day off the bike for sightseeing. Now it is back on the road tomorrow and nothing but hills on the two ways out of town. Like the cave tour guide said, “Missouri is known for its hills!”
Sponsoring again this year is Luis Villareal of Gear for Races from Raleigh. We’ve had a longtime wonderful business relationship with running shirts and gear.
Back here again tomorrow. Hope you’ll be here too!