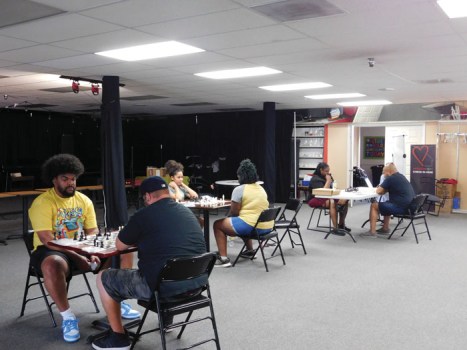 At least three chess games were going on by 10:30 Saturday morning at Mission House, were A Tribe Called Chess meets every week. Elisabeth Strillacci/Salisbury Post 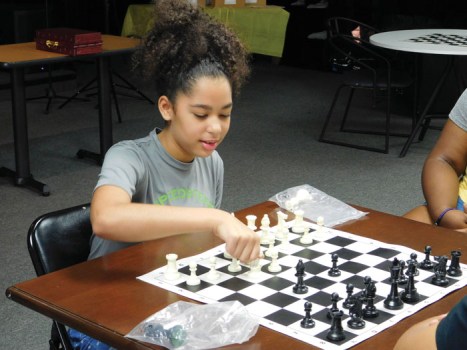 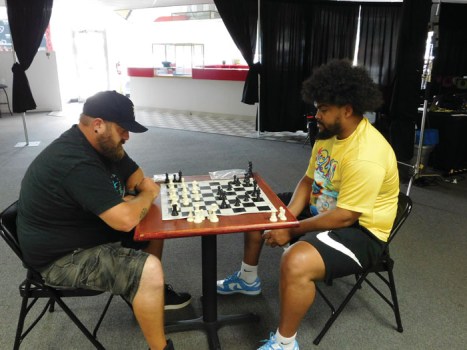 Jeff Helpman, left, noted he was a bit rusty at the game before taking on General Alexis Archie, who has been coming to a Tribe Called Chess since its beginning, eight months ago. Elisabeth Strillacci/Salisbury Post

SALISBURY — Less than a year ago, a dream shared by two men for years finally came to fruition, even though one of them is no longer here.

Alex Clarke, who died in 2020 after a long battle with ALS, was a well-known youth advocate in Salisbury. Anthony Smith, currently a city council member, pastor of Mission House church and a close friend of Clarke’s, said the two men shared many things, including a passion for the game of chess and all it has to offer.

“I played chess when I was a kid,” said Smith, “and I have always been fascinated by history and military strategy. I’m an armchair historian. So chess is a natural fit.”

He and Clarke talked for years about starting a chess club, wishing to show both children and adults the life lessons that come from the game. Unfortunately, said Smith, Clarke passed away before they could bring the dream to life. But Smith decided he would carry on, so about eight months ago, he reached out to Clarke’s widow, who gave Smith the chess boards Clarke had collected in donations, in order to begin.

And a Tribe Called Chess was born.

Players, of any age and any skill level, are invited to join in at 1o a.m. each Saturday at the Mission House, 120 Statesville Boulevard.

Smith and other “generals” are available to teach newcomers the ropes, and anyone is welcome to play any competitor.

Smith refers to players as generals for a reason.

“Playing chess is very strategic, like the military,” he said. “You are the general and the pieces are your army, the board your field, and it is your job to lead your army, be aware of the field, your surroundings, your enemy. Make a plan, see ahead to what might be coming, pay attention. There are a lot of life lessons in there.”

And the number attending is growing, so Smith and Clarke’s vision is coming to fruition.

Saturday, 10-year-old Sydney Gabriel sat across the board from Smith, confident in facing him. But when she first came, she was not so sure.

“When my parents told me I was going to come play chess, I had mixed feelings about it,” she said. But she has quickly come to enjoy the strategy and the planning, and Smith says she has been a fast learner. Though he did manage to get her in checkmate eventually, it was not a fast or a particularly easy win.

“I have taught all my kids chess,” said Smith, “and I want others to have the same experience. I tell kids they all have a superpower — leadership — and chess helps them tap into it. It’s also a way of teaching mindfulness, and being present in the moment. Something we all could use a bit of help with these days.”

When Smith finished the first game with Sydney, he invited two new visitors, Lisha Weaks and her 14-year-old daughter, Peyton, to join the tables. Peyton and Sydney faced off, with Sydney teaching new player Payton, and Smith and Weaks moved to their own board where Smith began to teach Weaks.

Across the room, one of the core generals that come each week, Alexis Archie, invited visitor Jeff Helpman to join him. Archie, 25, has been coming since the very beginning, he said, noting it has helped him “in the game of life, through the strategies and life lessons, and reminding me to think before doing.”

Helpman was in the area because his daughter, an incoming freshman at Catawba College, had to be on the campus today, and he needed something to do while he waited.

“I haven’t played in years, so I’m rusty,” he said, “but I was interested to see what they have.”

Smith said the hope is that another community will form a chess club “and come have a competition with us, so we can beat them. So tell Spencer, East Spencer, any of the surrounding towns, they need to form a club and come take us on.”