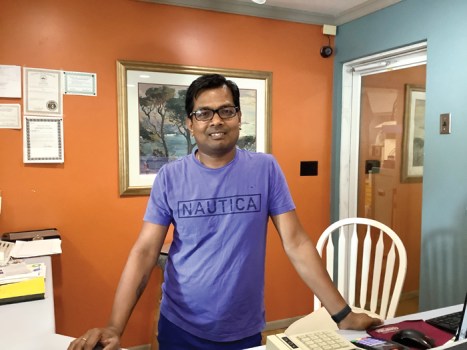 Sam gave Freeze a special rate at the Country Hearth Inn near the waterfront in Hannibal. Photo by David Freeze 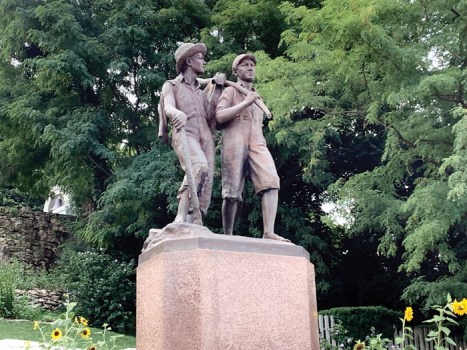 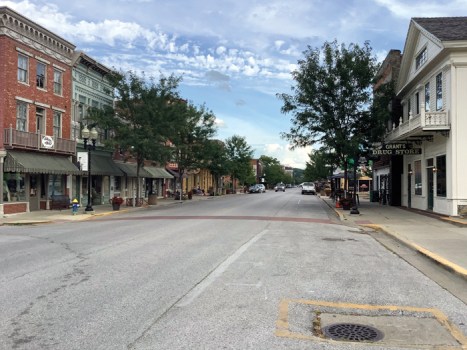 A lot down the Main Street of Mark Twain’s Hannibal. Photo by David Freeze 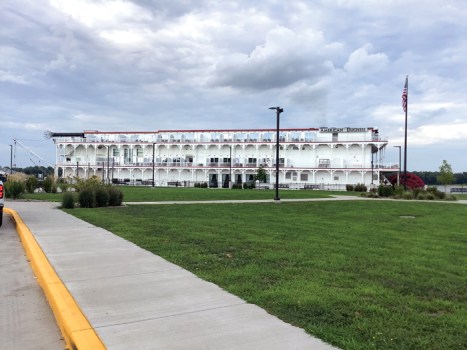 Freeze was told that these luxury paddlewheel riverboats are docked about every day during the summer. Photo by David Freeze. 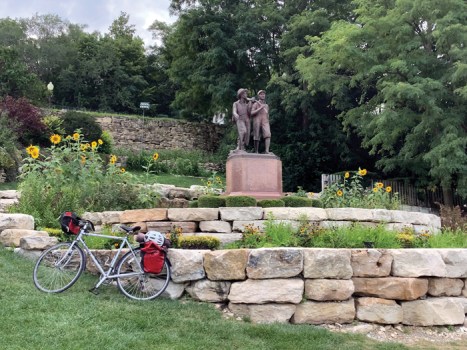 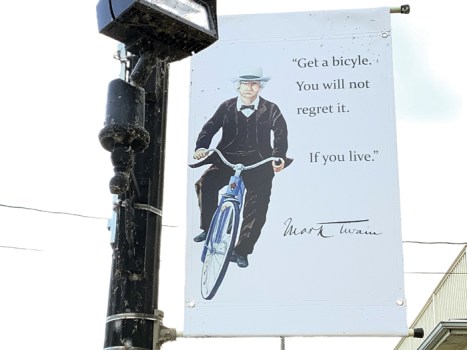 Mark Twain and his characters are quoted all around the old part of town. This just happened to be the first Freeze saw! Photo by David Freeze

Up earlier than any morning yet, I wanted to get to Hannibal as fast as possible and eventually just take it easy for a few hours. I was worried about the Ozark-type hills that wouldn’t let up yesterday but still was glad that today’s ride would be shorter in distance. The heat was supposed to be back as well and I envisioned a mid-afternoon exit from the bike seat.
The first 13 or so miles from Keokuk this morning were awesome. Very little traffic and clouds blocking the sun. Best of all, they were perfectly flat! Feeling cocky, I hoped for an even earlier arrival in Hannibal.
Then U.S. 61 changed back to a four lane and the rolling hills returned, one after another. Then we bypassed Canton, Missouri, after crossing the state line. The highway tried to pass by Palmyra too but one truck stop was right there and easy to reach. I was burning up and down to the end of my emergency water. I reloaded, including some Diet Mt. Dew and Reese’s Cups, for the push on to Hannibal.
I spend much of every day envisioning how I think towns will look. I missed bad on Hannibal, thinking that a little town would be all near the water and very quiet most of the time. Hannibal starts about two miles from the water with lots of modern motels and stores on U.S. 61. A very hilly ride through neighborhoods brought me right down to a much bigger and busier old town than I expected, but this part was on the water. I had a room, but tried to figure out what to see and do. I went to the visitor center and got plenty of help and lots of activities planned for tomorrow. Hannibal is booming with tourists.
I’m staying in the Country Hearth Inn, about two-tenths of a mile from the water but less from the old town. Everything I see is Mark Twain/ Samuel Clemens. Several of the houses he knew, along with the famous cave and picket fence, are all still near and will make part of a trolley tour tomorrow. I plan to ride a small riverboat, tour the cave and just dedicate the day to the history of Hannibal.
I did pick up a detailed road map of Missouri, and I’m concerned. Iowa did a great job of pushing roads out to the river. Based on my new map, there will be only small chances to see the water while in Missouri but I will be creative. My total miles were 70 today!
The Men on Mission of First Baptist Church in China Grove are another sponsor of this adventure. They do lots of community work helping with ramps and other projects for shut-ins.
I will spend tomorrow here and likely keep the same room again. I met the owner of the motel and we swapped best animal danger stories. I told about my grizzly while on the way to Alaska. Sam, the owner barely escaped with his life when charged by two elephants while cycling with a friend.
See you back tomorrow, again from Hannibal.