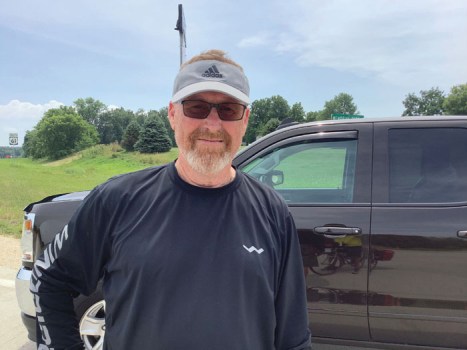 Richard Luckenbill was waiting for David Freeze at the top of a hill in Burlington, Iowa, with some helpful advice. David Freeze photo 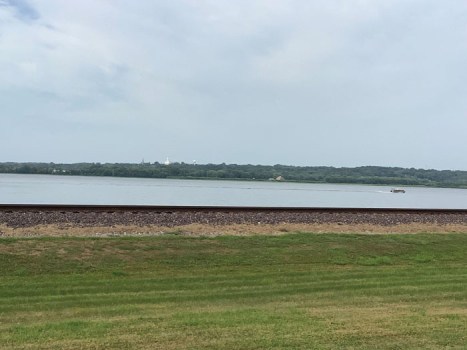 David Freeze rode a scenic byway route on the way into Keokuk. This was the view of the Mississippi River, which is definitely wider here. David Freeze photo 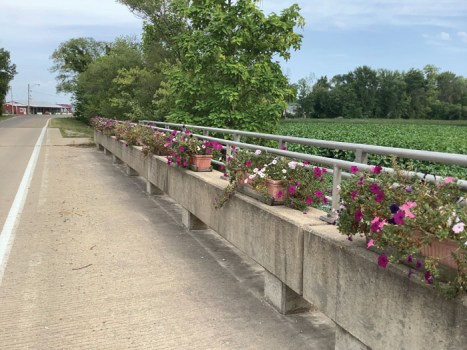 When I had to retreat back to Muscatine, Iowa, last night after the missed motel connection, it ended a long day. I checked the map last night and my best idea to get back on track was to pedal to Keokuk before today’s end. That is a 91-mile ride on a day that was supposed to be about 95 degrees.

I got up this morning and rode back out of Muscatine on 61 South, right past the supposed motel location and another one that is closed. I never like to backtrack!

My plan was to stay on 61 South for the whole day and it started out that way. Wopello went by and the sight of another closed motel. The road got bad with rough asphalt and no shoulder. Riding like this is tense because Iowa puts rumble strips in the middle of the road and cars and trucks keep going across the center line to avoid me but both sides can’t do it at the same time. Next was Mediapolis, the first town to have two convenience stores across the road from each other and a Family Dollar and Dollar Tree in the same store.

I got the shoulder back on the way to Burlington, one of the first capitals of Iowa. It’s a city of about 25,000 and I can attest to the fact that it has lots of stoplights and a booming downtown area. It is the only town today that had 61 South go through the center of the city. The highway bypassed Fort Madison with lots of exits and it ended at Keokuk, where I am tonight at the Chief Motel. It’s the best of the places I have stayed in so far, after a crappy experience last night in my second Travelodge.

Late yesterday I met cyclist Andy Vogel in Muscatine who offered some good advice. Today, I climbed a long hill just before entering Burlington, and Rick Luckenbill was waiting at the top. Rick is a cyclist with some long-distance cycling on his mind. He told me how to miss a potentially unsafe area and he suggested how I might finish today into Keokuk. Rick told me to exit 61 at Montrose and take a scenic ride along the Mississippi into Keokuk the back way. He mentioned a couple of hills, but I wonder which two he had in mind as my 91-mile-ride body struggled with all of them. The view was the best I had all day of the river.

At long last, I finally got to the Chief Motel. I had lined up the room with Alpa and was glad to meet her especially since the room is so nice. I have a Dairy Queen across the street and have had my first pineapple milkshake of the ride, along with a grocery store across another street.

Keokuk is the southernmost city in Iowa and it is where the Des Moines River empties into the Mississippi. Keokuk has a population of about 10,000.

I plan to leave Iowa in the morning and ride to Hannibal, Missouri. I’m looking forward to another highlight day of the journey with Mark Twain and so much more.

Another returning sponsor is Dick Richards with his wife Jane. They stay in touch throughout each journey.

We’re headed to Missouri tomorrow and keep reading and sending your prayers!