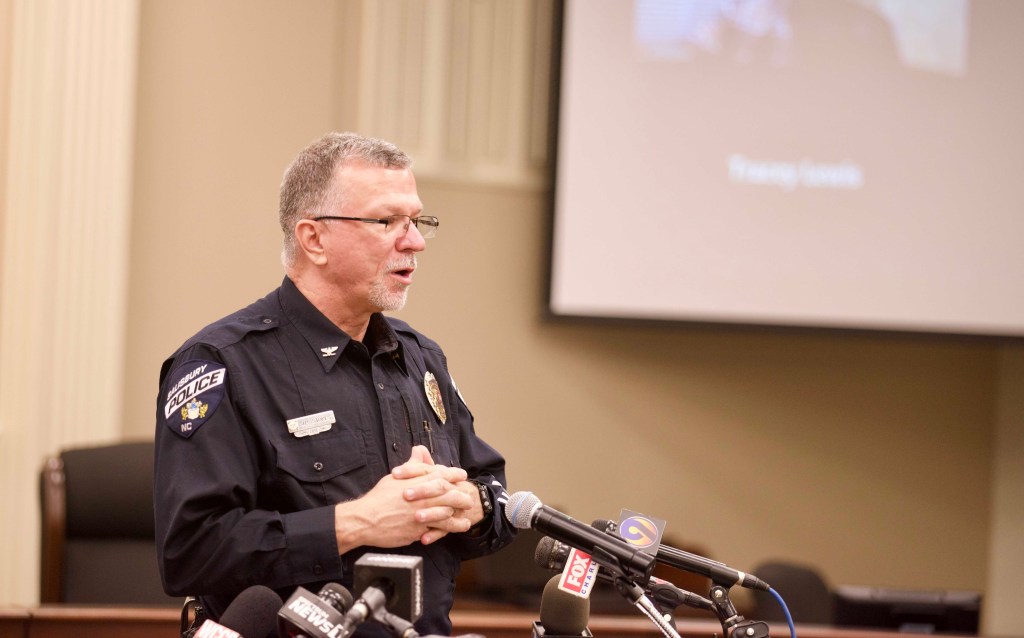 SALISBURY — In an update to the city council on statistics for the department for the last six months, Salisbury Police Chief Jerry Stokes pointed out that up until two weekends ago, violent crimes were down.

Between 2019 and 2020, Stokes said the city had the lowest violent crimes in 20 years, but since then, numbers have begun to creep back up. Then, on the weekends of July 23-24 and July 30-31, there were, respectively, five and four reported shootings.

“And we are dealing with a lack of cooperation from residents and witnesses,” he said, “which complicates matters even more. And these likely are connected to gang activity.” Stokes said it is often a matter of someone causes a problem, the other side tries to handle it on their own by retaliating, then the first side retaliates, and it is self-perpetuating until something happens to stop it.

“I would say the shootings over both weekends are gang related,” he added, “so I can tell you this is not random.”

Mayor Karen Alexander wondered if there is any way to get people to talk to police, “or are they just absolutely opposed to that?”

Stokes said he has worked to bolster gang intelligence, pulling a violent crime detective off that detail and assigning him full time to trying to parse information on gang involvement, but it can still be daunting.

Asked about the department’s ability to try to divert younger children from gang involvement, Stokes said “we don’t have anything at the PD for intervention.”

“Well, it’s also really not your place, nor do you have the budget for that, I know,” said Alexander.

Stokes added that he also does not have the ability to conduct neighborhood outreach. His department is not currently fully staffed, (they are at about 82% staffing, and have several officers on light duty because of pregnancy and another officer on military leave), and they are stretched thin.

“I can’t tell you how many calls we did not answer this past weekend because we did not have the capacity,” he said. Calls were prioritized, and, for example, he said one caller reporting a suspicious person was called back and notified “we’re not coming.”

“We provide a lot of services,” he said. “If you lock your keys in your car, we will come help. We need to consider what we can do to manage officer work loads.”

He also said the city “has suffered from gun crimes for a long time, and although we have gotten better, we still have a lot of work to do.”

Part of that can come from residents, though. Stokes said thefts from motor vehicles are ticking up, and it is in part because people continue to store guns in their cars.

“As I have said time and again, your car is not a gun safe,” he said. “You are contributing to gun violence if you leave your gun in your car.” He said often gang initiation involves breaking into cars, and the participants know how much guns cost, and so know the neighborhoods to target to find guns in cars. And stealing a gun can be a promotion, taking a gang member from entry to shooter.

“I have heard from many people that because they are not allowed to take their gun into certain establishments, they leave it in the car, then when they get home, they forget about it,” he said. “I’m just providing that information, you do as you will with it, I am not getting into that political debate.”

He told the council that recruiting is difficult, and getting good quality applicants is even harder. There are signing bonuses for both new recruits with no experience and for lateral transfers who already have basic law enforcement training. But it is still not enough. His officers are under more strain than the job normally imposes because they are short staffed.

“I just want to commend the Salisbury police for their efforts over the last two weekends,” said council member Anthony Smith. “I know it’s been stressful. I know one of the intended victims from one of the cases, and I believe he is cooperating. I grew up around gangs myself, and I know how challenging that is. We put a lot on y’all to do this, and we need a broader approach than just law enforcement, so you are not carrying all of the weight.”

Alexander said she had spoken with state Attorney General Josh Stein earlier in the day, informing him of the recent shootings and letting him know the city, and the department, need help.

“He will be talking with (City Manager) Jim Greene about some additional resources, and then Mr. Greene will be reaching out to you, chief,” she said. “We’re going to do what we can to get you some assistance.”