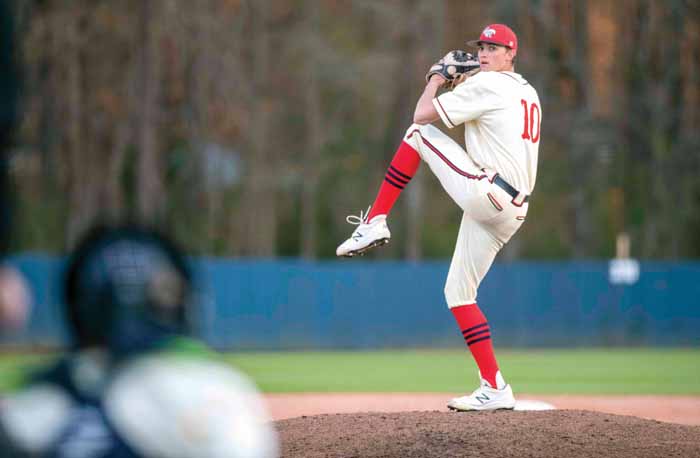 GRANITE QUARRY — East Rowan rising senior Chance Mako should be near the top of your names to know in Rowan County high school sports.

Mako has a solid past, with some good things already in the scorebook, but it’s his future that’s really exciting.

Mako had the opportunity to pitch in Dodger Stadium last Friday in the High School All-American Game, had a chance to pitch from the same mound where Clayton Kershaw would stand to begin the MLB All-Star Game four days later.

“That was a really big deal for me,” Mako said. “I’d been on minor league fields. but I’d never been on a major league field before, so it was a special experience. I’ll remember it.”

In other words, get ready for Mako being a national figure.

Well, he’s got exactly what every baseball scout is looking for. The word they like to use is “projectable.”

The rangy right-hander is 6-foot-6, 190 pounds. He is blessed with the ideal pitching body. Long and lean and flexible. He looks almost thin now, but he’ll add pretty easy pounds and muscle through natural maturity and through weight training.

He throws hard and he’ll throw harder in years to come. He has sensational arm speed as well as radar-gun speed. His right arm is a whip. He’s touched 95 on radar guns, and he pours out a  steady stream of 93s. He can throw strikes at 91-93, and that’s what matters.

“Chance’s work ethic is incredible,” East Rowan head coach Brett Hatley said. “The right makeup to be something extraordinary is definitely there. He’s not just some talented kid. He’s a kid who’s working has hard as he can to use that talent. He’s on a trajectory right now to be one of those special guys.”

Mako has started throwing two different fastballs, a four-seam riser to the right-handers and a two-seamer with sinking action to the lefties.

“The two-seamer is something I’ve added to the arsenal this summer,” Mako said.

The All-American Game was a 13-8 slugfest, with the best hitters in the country feasting, but Mako did fine. He was the eighth of nine pitchers used by the “National League” team.

Besides the two fastballs, Mako has a changeup and a slider. He won’t need them much, not in high school, but they’ll be important for him when the next step comes.

What that next step will be is still to be determined, but assuming he stays healthy throughout his senior year at East, he’s going to be in a win-win situation with two excellent options.

N.C. State University thought so highly of Mako that it offered him back in the summer of 2020 when COVID still had a firm grip on everything. At the time of that offer, shortly after his freshman year of high school, Mako had faced eight varsity batters for East Rowan.

The other option that should be there for Mako next summer is professional baseball.

He could be a first-round draft pick in 2022. That wouldn’t be a shock, There seems to be little doubt that he’ll be picked in the early rounds.

His name is out there. He’s an All-American. He’s on every scout’s list.

“It was big pitching to some of the best guys in the country last week,” Mako said. “It’s a great feeling to be picked to be in a game like that.”

Mako enjoyed a game in October 2021 as a member of the South Charlotte Panthers showcase team that put him on the radar as a national figure — 16 strikeouts, 0 walks — against high-level competition.

He has continued to shine this summer for the Panthers, where he, East slugger Morgan Padgett and South Rowan lefty  Haiden Leffew, a Wake Forest commit, are teammates.

In Mako’s most recent mound outing for the Panthers he walked three in four innings, but he struck out six, allowed only one hit and didn’t give up a run.

His control and command are still works in progress.  Mako has room for improvement as far as efficiency, as he had 35  walks, 15 wild pitches and eight HBPs in 2022.

But he was almost impossible to barrel. He threw 1,014 pitches and gave up two extra-base hits.

Look for the walks to drop and the strikeouts to rise as a senior, as he’ll be the leader of the pitching staff for the first time.

Cameron Padgett, two-time Rowan County Pitcher of the Year, will be a UNC freshman. Padgett isn’t as tall as Mako and doesn’t throw as hard, but he was an extremely poised and polished hurler for a high school guy.

Mako, who has been in love with baseball since age 6, is a New York Yankees fan. Surprisingly, his favorite player isn’t a hurler, it’s towering Yankees slugger Aaron Judge.

He swings the bat for East and he has Judge-like power, but it’s that electric right arm that gives him a chance for a big future in baseball.

Mako has one more All-America team to try out for this summer.

There’s also one more major summer tournament for the Panthers. who played their first pool game in the 17U National Championships in Georgia on Wednesday. That tournament includes 150 teams battling in 25 six-team pools, but it’s not like the Panthers fear anyone.

They’ve got a lot of talent, including South Brunswick center fielder Walker Jenkins, a sure first-round pick next summer.

They’ve also got some pitchers who are going to be a very big deal.