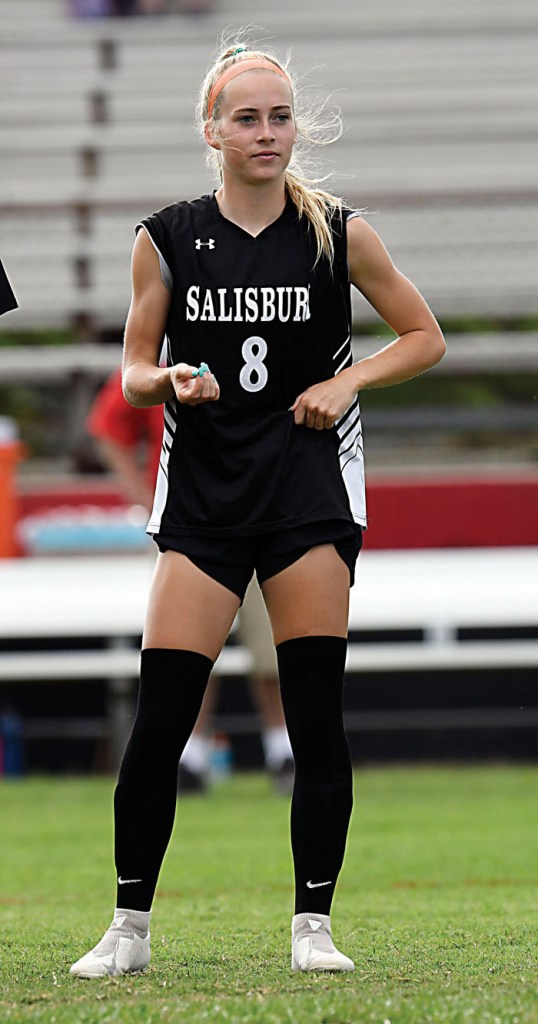 Salisbury had a home soccer game scheduled with Lexington that night. Conflicting with soccer was the Central Carolina Conference Track and Field Championships in Denton, one of the biggest events of the season for the Hornets.

So which sport did Webb choose? 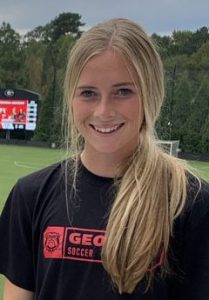 Sutton Webb will play soccer at the University of Georgia. —  Submitted photo

“Soccer is what I do, so I wasn’t going to miss that, but I’ve always tried to do everything I could to help out our track team,” Webb said. “My favorite track event —  my best event  — is the 800 meters, but the 800 was too far down the order of events for me to compete in that and still make it to soccer on time. So I had to scratch the 800, but I was able to run the 1600.”

Webb rode the bus to Denton with her track teammates. She won the 1600.

Denton is only about 25 miles from Salisbury on a map, but that’s as the crow flies, not as the roads turn. There’s no direct way to get from one place to the other.

After winning the 1600, Webb wished her teammates good luck and jumped in the car with her father. He drove her back to Salisbury High without violating the speed limit. She was on the field at Ludwig Stadium in time for soccer.

Then she scored four goals in an 8-1 SHS win. Seriously, four goals.  That monumental day will be her legacy.

“I hadn’t played well the first time we played Lexington, so that was some motivation,” Webb said. “I was worried about that day, but it turned out to be a very good day.”

There were a lot of very good days for Webb during a very special career.  If COVID hadn’t train-wrecked the spring of her sophomore year and played havoc with her junior year, there’s no telling what sort of numbers she would have put up.

Even in a fragmented career, she’s been one of the top Rowan female athletes of the century, and she repeats as the Tracy Connor Award winner.

Given in honor of Connor, a superb multi-sport athlete at South Rowan and one of the best basketball players in Wake Forest history, the award is presented to the top Rowan female athlete for each school year.

Webb had the chance to play a complete soccer season this spring for the first time since she was a freshman. The stunning results included 55 goals and 16 assists for a 17-2-2 team. She shattered school and county records with 137 career goals.

“So glad I got to play this season with my teammates and for Coach (Matt) Parrish, one of the greatest coaches I’ve ever had,” Webb said. “We got along, we won a lot, we had fun.”

Webb is on the small side, but her speed, skill set and athleticism made her a University of Georgia recruit. She’ll report to Athens and the Bulldogs on Thursday, but she’s stayed busy playing for the Charlotte Independence team in USL League One. Webb is one of the younger players and described the team as “pre-professional,” but even on that level, even with nothing but elite players, she still produces goals.

Parrish recognized her specialness immediately when she was a freshman. She brought a different level of wheels to the Hornets’ program, and she’s a lot more ferocious than she looks.  She’s been a perennial  All-State pick by the North Carolina Soccer Coaches Association.

“She’s super competitive,” Parrish said. “One of those people that no matter what game or what contest they’re involved in, their aim is to reach the upper echelon. Only she did it in a quiet, unassuming way.”

In the fall, Webb competes in cross country. It’s a healthy hobby, ideal cross-training for soccer.

She was recruited for cross country by Salisbury teacher/coach Sallie Hundley when she was a sophomore because the Hornets only had four runners, and five are required to score.

She made her cross country debut that season, came out of nowhere to finish third in the Rowan County Championships.

She eventually became the county’s pace-setter in the sport and won the Rowan County Championships as a senior on a muddy, slip-and-slide day at Dan Nicholas Park. She clocked 20:51 and won by 43 seconds. She also won the Central Carolina Conference Championships, clocking 19:44 on a Denton Farm Park course that was slightly shorter than the standard 3.1 miles.

“She ran every race hard,” Salisbury cross country coach Leah Huggins said. “A great competitor, a great person, a great teammate, a great friend. Anyone who came in contact with her was better for it.”

Track and field is a two-season for sport for Webb, who competes indoors in the winter and outdoors in the spring.

She competes at a high level in a wide range of running events. Competitors are limited to four events in a given meet, but it’s not an exaggeration to state that Webb could place in the top eight  in county/conference meets in literally everything — from the 100 to the 3200. She has an unusual combination of stamina and explosion.

Webb placed second in the 2A State Championships in the 1000 meters during the indoor track and field season.

Rowan County individual champion outdoors in the 800 and 1600 and part of the county champion 4×100 relay team, Webb capped her track and field career with a second-place finish in the 800 meters in the 2A State Championships.

The state championships were held in Greensboro less than 24 hours after Salisbury was eliminated from the soccer playoffs at East Gaston.  That was another quick turnaround for Webb, so she scratched the 1600, put every ounce of energy she had into the 800 and ran 2:19.28 for runner-up honors. But there was still one race left for her.

Salisbury assistant track coach Romar Morris, who helped Todd Parker this spring, pieced together a strong 4×400 team late in the season. Thinking outside the box, he teamed sprinters Dashia Canada and Kendall Henderson with Webb and Millie Wymbs, normally a distance runner. They placed third in the 2A State Championships and headed to the podium with wide smiles.