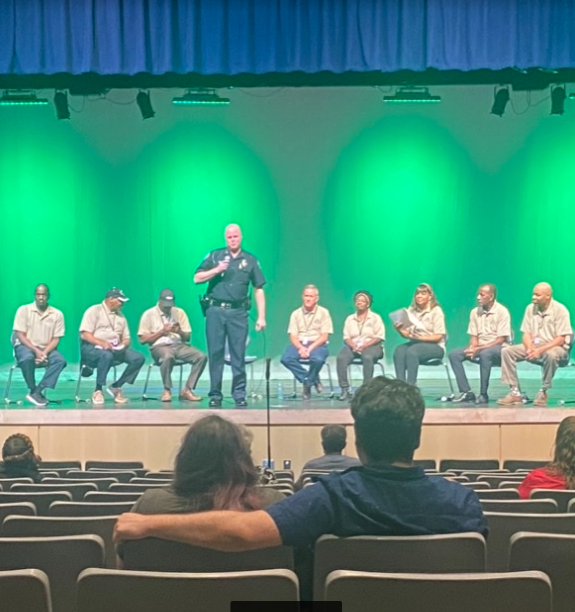 KANNAPOLIS — People from around Kannapolis braved thunder, lightning and power outages across the region Thursday evening to participate in a community conversation with Kannapolis Police Chief Terry Spry.

The conversation was hosted by the Community Bridge Project, a group of local ministers who came together to “build positive and healthy relationships among diverse groups within Kannapolis.”

After introducing themselves, the leaders of the Bridge Project explained that the goal of the conversation was to focus on local issues facing Kannapolis residents in particular.

Willie Rash explained the importance of giving everyone in the group a voice and other members including Gloria Talbert and Beryl Torrence noted that the group’s goal was to unite the community and seek out solutions by having these conversations.

The Bridge Project plans to hold these meetings regularly and with their inaugural event they welcomed Chief Spry to talk about his own department’s goals to work with the community and to also answer questions from the audience.

Spry explained that he is a supporter of “policing equally across all areas of the community” and told those in attendance that his officers were all told to uphold this approach to policing.

He also emphasized that his officers were always expected to be respectful of community members and for anyone who feels they have been treated otherwise to immediately report it.

The questions posed for Spry addressed a number of concerns within the Kannapolis community. One participant asked the chief if he thought there was ever a point where someone was calling the police “too much.”

Chief Spry responded that there was no limit to what is too much in terms of reaching out to law enforcement and said that number is whatever number it takes for people to “sleep comfortably” at night knowing that they can feel safe.

The conversation also touched on concerns about gang involvement in the community. Spry said that he wanted to see a school resource officer (SRO) in every school in Kannapolis in the future so that they can “build relations with students at a young age” so that they are less likely to distrust police or get involved in criminal activities when they’re still in school.

Another member of the audience asked the chief if he felt his officers were ready for an active shooter situation given the incidents that have recently occurred involving similar situations across the country. Spry assured the crowd that his officers are trained for these situations in advance and retrained on an annual basis so that they can be proactive in addressing these concerns.

The conversation and the sentiments expressed in the group were largely positive and suggested that the community and local leaders such as Chief Spry plan to work together to better Kannapolis however possible.

Further events will be held in the near future as the Community Bridge Project members continue to seek out solutions for Kannapolis moving forward.

More information about these upcoming events will be posted at www.KannapolisNC.gov/Calendar or can be found by emailing The Community Bridge Project group at ktownbridge280@gmail.com.