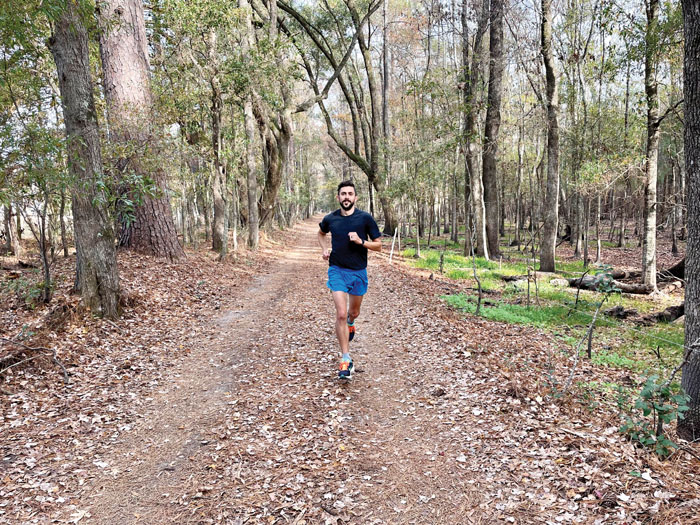 The China Grove Main Street Challenge 5K has often attracted top athletes, hoping to run at their best on a very fast course. Starting just north of the fire department, China Grove’s Main Street takes center stage all the way to Kimball Road, where the runners make the one and only turn on the course. Then it is a fast dash back to the fire department and their finish.

Scott Dvorak of Charlotte had held the North Carolina 5K record since 1997 with a sizzling time of 14 minutes and eight seconds. Donnie Cowart, a 36-year-old from Winston-Salem, had previously run the China Grove course with a 14 minute and 21 second finish, good enough to win most races but still well off the standing state record. Cowart decided to chase the record this year just ahead of a marathon attempt at Grandma’s Marathon in Duluth, Minnesota, yesterday.

Cowart said, “I started running fun run mile races at an early age, but really when I was cut from my eighth grade basketball team is when I found track!”

He grew up in Rustburg, Virginia, and said, “I was a Division 1 All America in the 3,000-meter steeplechase while running for VMI in 2009. Then for the following eight years, from 2010 through 2017, I never missed a major U.S. Steeplechase final, including a fourth-place finish in 2012 at the Olympic trials.” The steeplechase is track race where participants leap over a barrier several times while managing a water feature. Some choose to land in the water and others try to clear it.

I asked Cowart why he chose to focus on the N.C. state record. He said, “I love to challenge myself and with all the local 5Ks, this record is one that is always talked about in my circle. Leading into the race, I’ve been training for the Grandma’s Marathon, so I was regularly running 140-plus miles per week with multiple daily workouts!”

Race Director Aaron Crowe was glad to have a state record attempt on the local course. He said, “Donnie let us know that he intended to chase the record, and then we made sure to have the specific timing requirements in place to verify the record if it should happen. The race starts at 9 p.m. and its usually hot and humid, but June 3 gave us a nice surprise with a cool evening and low humidity. We were ready should Donnie beat the record.”

Cowart said, “My thoughts through the race were mostly on maintaining a fast rhythm and staying in control.” Cowart beat the current state record with a sizzling 14:05 finish. His time will be unofficial until a pending record application is completed and submitted to the United States Track and Field Association officials in North Carolina and then verified by national officials. Verification is likely to take several weeks once the application process is complete.

Cowart said, “All of my family is from Rustburg, Virginia, including my mom, Valerie. and my sister, Raeleen, with her husband Mark and their three kids Brayden, Payten, and Keyten. And my papaw who’s 88 has always lived in Rustburg!”

While training for Grandma’s Marathon, Cowart set his sights on breaking a 2 hour and 10 minute barrier for the full marathon (26.2 miles). Cowart added, “In other news, my wife and I are expecting our first baby without fur! Our baby girl is expected Nov. 10. We are very excited for our new addition to our pride!”

For now, the China Grove 5K is unofficially the fastest 5K in North Carolina. Cowart ran at a 4 minute and 32 second pace for the 3.1 mile course.

The next two races locally are the Shiloh Missions 5K in Faith on July 2 and the Run for the Greenway 5K in Salisbury on July 16. Look for these and other local events at www.salisburyrowanrunners.org.