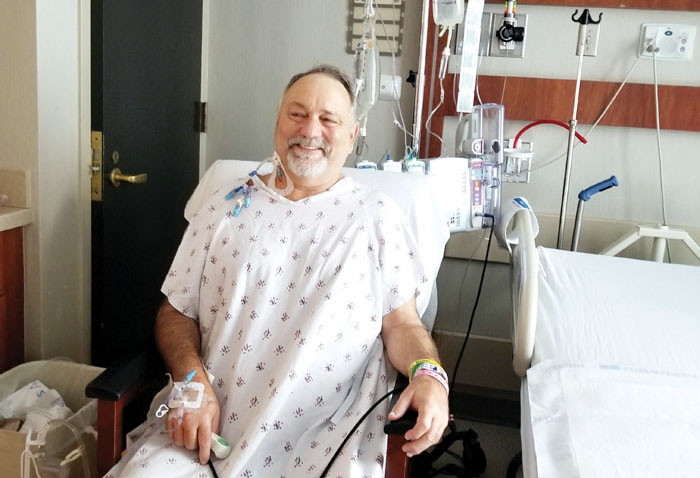 Nick Deal on the first morning after his recent transplant surgery at Atrium Health. He knew immediately that the new kidney was working well. Photo by Donna Deal.

Donna Deal drove home with husband, Nick, in the car. She knew just where the accident had happened on Interstate 85 after she had donated a kidney to him and a violent wreck on the interstate abruptly took the kidney away. She gripped the wheel, afraid to look left or right, and kept hoping that she would make it home with her precious husband and his most recent new kidney.

It had taken months for Donna and Nick last time, following all the procedures to make sure that her donor kidney would be a match for Nick. The surgery at Atrium Health had gone as expected, and Nick felt good, the best he had in months. His own kidneys were barely functioning, and dialysis had not gone well. He needed Donna’s new kidney.

Donna’s kidney didn’t survive the wreck, although an Atrium team tried their best to save it. Nick returned home drained both mentally and physically from the ordeal and then was back to square one. Way down on the transplant list, Nick wondered if he would get another chance at a life-saving kidney.

After the wreck, Donna and lots of friends went to work. The Salisbury Post news story of the wreck and the lost kidney grabbed lots of media attention when several TV and radio stations picked it up. Donna said, “I began to get calls from people who were considering a donation. I wrote down their names, about 15 of them. The search for the newest kidney seemed to be going well, then the Atrium Transplant Center asked me to let them handle any interest. Things sort of ground to a halt.”

Then suddenly, things changed dramatically in the last two weeks. A kidney had been found by direct donation, meaning the responsible parties wanted the potential donor kidney to go to Nick specifically. Nick’s former business landlord at his Firehouse Garage business was Lisa Sigmon, who knew Sheila Johnson and Tamara Norman at their church. All these women were already aware of Nick’s story when tragedy struck Tamara’s home. Her 31-year-old son, Brendan Volz, died of a drug overdose. Tamara wanted her son’s kidney to go to Nick.

Within just a few days, Nick had been checked out medically to see if he could handle another transplant. He was approved. The donor was pronounced dead on Monday, June 6. Nick entered the hospital on June 7, where he was overcome with anticipation and anxiety while the donor kidney was checked out. All was good again as kidney monitoring continued until surgery time on Wednesday. The donor family followed Nick to the operating room in a “Walk of Honor.”

Surgery with Dr. Eskind began about noon and was completed by 3 p.m. Nick knew Dr. Eskind from both the original transplant and the effort to save Donna’s kidney. He and Donna knew many of the hospital staff already. Nick said, “One nurse called me a rockstar! But we were comfortable already with the medical personnel and knew how capable they were.”

Nick woke up about 6 p.m. and knew already that the kidney was working well. He said, “I was sore, they had to cut me from about the middle of the rib cage and down across my stomach. It matched the same cutting that was done on the other side during the original transplant. So, I had a big smiley face across my chest and stomach. But as soon as I woke up, I knew the kidney was working well. I couldn’t believe I felt so good.” The donor kidney was from a 31-year-old male, meaning that it was strong and better matched in size to Nick’s.

Nick’s two original kidneys are still in his body, but Donna’s kidney from the wreck was removed. The new kidney is sort of middle way between the two original ones. Nick added, “I didn’t feel tired at all the next day. I was sore, but that continues to lessen each day. They got me up walking right away and I continue to feel better overall.” The Deals are now back at home in Grace Ridge.

Short-term goals for Nick include getting used to walking again. He said, “I used to walk 5-6 miles a day, and I want to play golf again. I want normalcy in my life, as near 100% as I can get, and to genuinely enjoy life again.”

Nick is on anti-rejection drugs and does have a few limitations going forward. He can’t have sushi or rare steaks, he can’t mow his own grass or be allowed to drink well water. Sunscreen is required when outside. Nick does have to get regular bloodwork and see his nephrologist to confirm that all is going well. He’s striving for high GFR and low creatine rates. Nick is also very happy that he never had to resort to dialysis to flush his kidneys, although his output had dropped so low that his other options had run out.

The donor’s mom, Tamara Norman, will likely remain part of Nick and Donna’s life. They all wanted to meet each other and Tamara invited the Deals to Brendan’s memorial service on June 25. Nick said, “I’m sure we’ll stay in touch, we had a real connection.”

Nick added, “From March 2020 until now, that’s two years lost from the kidney issues. I slept all the time, and the kidneys even had a part in my limited breathing. God is so good! I wouldn’t be here if not for him. Prayers work and it’s been amazing how many churches and people have contributed to this outcome!”