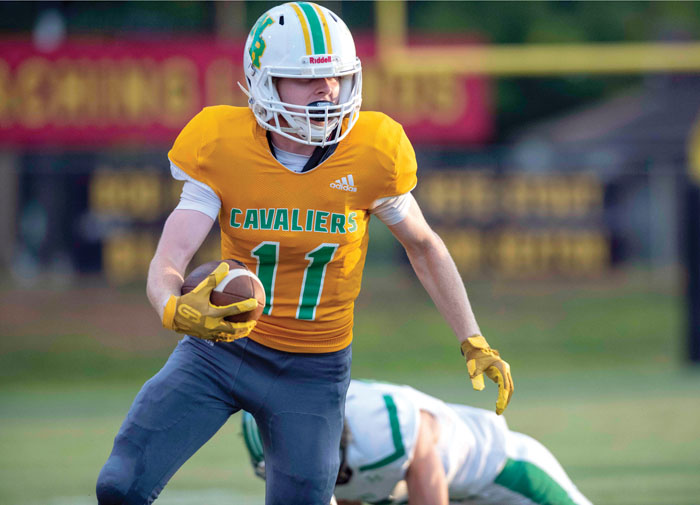 SPENCER — Orion Harris caught two touchdown passes in the state playoffs in the spring of 2021, but North Rowan used him as a safety 95% of the time in the fall season.

North had record-setter Amari McArthur catching the lion’s share of the passes from freshman Jeremiah Alford, so the move made sense.

The job switch was fine with Harris. He made an impact. As a defensive back, he proved to be a hard-nosed tackler and a good man to have in pass coverage. There were games where he checked multiple boxes on the stat sheet — TFLs, sacks, breakups.

“He was a good receiver, but he helped us more as a DB as a senior,” North head coach Nygel Pearson. “He’s a smart kid, classroom smart and smart on a football field. He made some good reads, had some plays.”

Ferrum College, a Division III program in the foothills of southwestern Virginia, is next for Harris.

Officially, they are the Ferrum Panthers, although they are widely known as the “Black Hats.”

It’s a program that takes pride in providing a chance for athletes who were labeled as a little too slow or a little too small by other college programs to play football and earn a degree. Ferrum, which competes in Old Dominion Athletic Conference, has developed a strong gridiron tradition and posted another winning season last fall.

Harris should fit in with the “Black Hats.”

Pearson remembers his biggest play of an 8-4 fall season as a critical pass breakup in the overtime win against East Davidson.

“He made interceptions, but that probably was the single biggest play,” Pearson said. “It was huge,”

Harris also showed he could still do some damage with the ball in his hands. In the playoff victory against Bessemer City, Harris scooped a fumble near midfield, picked up a wave of blockers, cut back a few times like a running back and put the ball in the end zone.

Harris demonstrated solid athletic ability for North Rowan’s track and field team. The Cavaliers were able to count on him for points in both hurdling events in the Rowan County Championships, Central Carolina Conference Championships and even in the 1A Midwest Regional, where he had a fifth in the 110 hurdles and a sixth in the 300 hurdles.

Pearson isn’t sure if Harris will be a DB, a receiver or a special-teams player at Ferrum, but he’s pleased he’s getting the opportunity.

“He’s one of the guys that helped set the standard for us on and off the field,” Pearson said. “Not so much by what he says, but by what he does. He’s always done the right thing.”