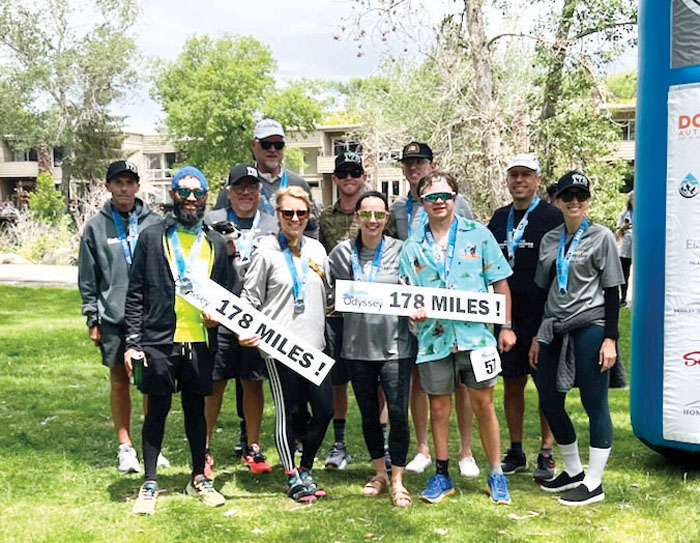 Each year, I look forward to the Reno/ Tahoe Odyssey, a team run that covers 178 challenging miles. The Mission Senior Living team consists of twelve runners, six each in van 1 and van 2. On June 3 and 4, the team got together from across the country, and took on the mountains, serious mountains that can’t be found around here. Twice over the course of the distance, we hit about 7,000 feet in elevation, this year with snowy mountains to be seen and a chilly wind blowing.

I flew out to the MSL office on Thursday morning June 2nd, eventually getting there after the 6 a.m. flight to Dallas was cancelled. Flying is different today, with cancellations and delays almost expected in large numbers. A competent American Airlines agent got me to Reno by early afternoon with two rerouted flights, one to Phoenix and the other connecting from there to Reno. I visited with familiar folks in the company office and headed for a good night’s rest at the hotel.

Friday morning, our team in Van 1 consisting of Sarah, Laura, Darryl, Tom, Luis and me started at 8:15 a.m., climbing up from Reno with just about every step. I was the second runner out, climbing with a good view of the mountains we faced. Each runner gets a leg, or a turn of running with a specific distance and difficulty that ends at a checkpoint where all teams exchange to the next runner before starting the next leg.

After our six legs were complete, our Van 1 passed off the relay to Van 2 consisting of Lindsay, Sammi, Shane, Jeff, Nate and Stuart. When our Van 1 was off the road, we tried to rest by napping and also eating with plenty of hydration. Each runner has three legs over the course of the event, all rated in difficulty. Mine were rated the second hardest, but only one of my legs was difficult the whole way. Van 1 was back at work, and I climbed to Emerald Bay at Lake Tahoe, just as night was about to fall. The snowy mountain peaks seemed just ahead and above me the whole way. Will all the climbing, there plenty of difficult legs for our runners.

Van 2 took over and brought us quickly back down to Carson City. With Van 1 then back on the road, my third leg was a mostly flat run through neon lit city streets just before the first light of dawn appeared. After my leg, the course turned uphill again steeply into super historic Virginia City, Nevada, once considered the richest city in America and briefly the home of Mark Twain. Virginia City was so wealthy that President Lincoln pushed statehood for Nevada in an effort to help finance the northern effort in the Civil War.

The middle of Virginia City was the final changeover back to Van 2 and began the push for those six runners on to the finish back in Reno. My three legs totaled 16.4 miles. With 241 teams, 36 legs, 2712 runners and 17,775 feet in elevation change, this is one heck of a challenging event! Our team finished 76th, up from 143 in 2019 before the 2020 and 2021 events were canceled for COVID concerns. The MSL team covered 178 miles in 27 hours, 53 minutes and 17 seconds. We also got the award for best decorated vans and honorable mention for our volunteer checkpoint. Great job by all!!

Back in Rowan County and with no snowy peaks around, the next two races locally are ahead in July. The Shiloh Missions 5K is on July 2 in Faith and the Run for the Greenway 5K in Salisbury is July 16 at Knox Middle School. For more information on upcoming events, go to www.salisburyrowanrunners.org