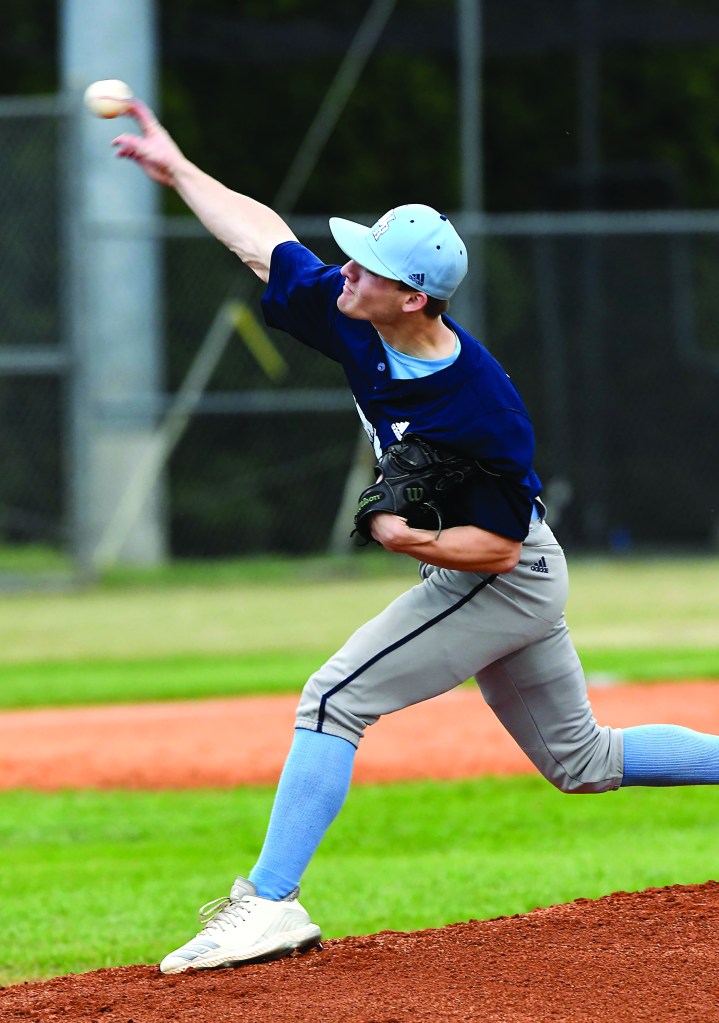 Jake Blevins. Photo by Wayne Hinshaw, for the Salisbury Post

In a 7-1 victory against Hickory, right-hander Jake Blevins threw six strong innings with the help of an outfield that made diving catches and an infield that gobbled up nine ground-ball outs.

A Pfeiffer recruit who was the No. 2 pitcher for West Rowan, the 5-foot-11 Blevins isn’t overpowering, but he can be highly effective when the defense is sharp behind him, and Rowa turned in its best defensive game of the young season.

Rowan (3-3) was able to play from in front after getting three runs in the bottom of the first against Josh Barkley, the first of three Hickory hurlers. Rowan ran the bases aggressively and Cameron Burleyson and Zander Burton had run-scoring singles.

Rowan made it 6-0 in the third, scoring three times after a two-out error opened the door. Luke Graham hustled to third base on a misplay in the outfield. Matthew Connolly’s infield hit scored Graham. Blake Hill’s triple to center field scored Connolly. Zach McNeely’s double to left scored Hill.

Hickory (2-5) loaded the bases in the fourth on two singles and a walk, but McNeely, the left fielder, made a fine catch to get Blevins out of the jam. That was a backbreaker for the visitors.

Rowan made it 7-0 in the fifth on hits by Jackson Deal and Burleyson.

Blevins lost the shutout in the sixth when he hit back-to-back batters with pitches to force home a run.

Rowan got hits from seven players, with McNeely and Burleyson getting two each.

* At Rich Park on Sunday, Mocksville beat Kannapolis 9-4 in a game that won’t count in the Southern Division of Area III standings.

Mocksville scored four runs in the third inning to take a 7-1 lead.

Both teams made one error. Mocksville had eight hits to Kannapolis’ 7.

Boston Torres was the losing pitcher.

Kannapolis plays at Stanly on Tuesday.